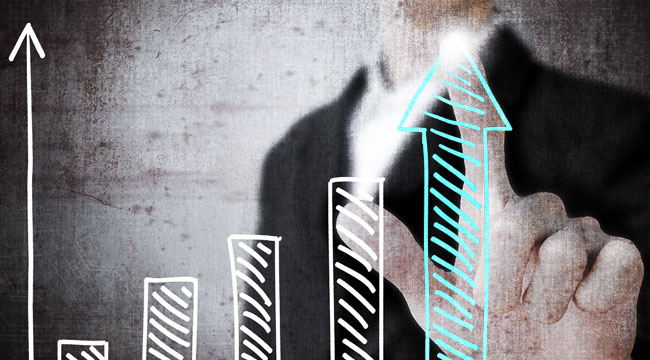 “There’s an old saying in Tennessee,” the last president said in a classic George W. Bush gem. “I know it’s in Texas, probably in Tennessee — that says, ‘Fool me once, shame on — shame on you. Fool me — you can’t get fooled again.'”

Well, you know what he meant.

But seriously, though, really; this time is really, really different. At least that’s what they want you to believe.

BlackRock’s Larry Fink told CNBC a few days ago that the Dow Jones Industrial Average could hit 28,000 in six years. That’s nothing; professional investor Ron Baron says the DJIA could be around 50,000 or 60,000 in 20 years.

The use of iPhones, iPads, and various and sundry technological devices must have destroyed our memories. Last I knew, we had all been collectively chuckling since the year 2000, when James Glassman and Kevin Hassett released a book entitled Dow 36,000: The New Strategy for Profiting From the Coming Rise in the Stock Market.

A year before that, David Elias came out with a book called Dow 40,000: Strategies for Profiting From the Greatest Bull Market in History. On the back cover of the book, the author speculated:

“Well-Researched Strategies to Soar With the Dow to 40,000 and Beyond! Date: June 2, 2016. DOW BREAKS 40,000! ‘The Dow Jones Industrial Average, for the first time in history, today broke through the once unthinkable 40,000 barrier. Leading market experts predict the market will continue to rocket upward.'”

Of course, these authors had the bad luck to publish books right as the Nasdaq and the Dow were peaking, and it was pretty much downhill from there. Cheap Fed money after Sept. 11 elevated financial and housing stocks (and houses), and the market rebounded again until the spanking in 2008.

Well, here we are again. Except it’s different, again.

James Surowiecki at The New Yorker says it’s the skeptics that are delusional. The mere fact that everyone is shouting “bubble” in this crowded market doesn’t mean there is a bubble, but in fact means there isn’t one, he says.

We’re all bubble-phobic, says the scribe. Given the recent bubbles and crashes, investors suffer from post-traumatic bubble disorder. There’s a bubble around every corner. We don’t fear the boogeyman, but the bubbleman.

“The argument for a stock-market bubble is flawed: When it comes to the role that corporations play in the U.S. economy, the present looks very different from the past, which means that historical comparisons to the 1950s, let alone the ’30s, tell us little. The four most dangerous words in investing may be, ‘This time, it’s different.’ But this time, it is different.”

What makes this time different, than the ’30s and the ’50s, says Surowiecki, is that taxes are lower and labor is cheaper, so these outsized corporate profits make all the sense in the world. Stock market valuations, therefore, are, if not in line with historic norms, conservative. Plus, there’s globalization, he says. Multinational companies are making nearly half their profits overseas.

Surowiecki figures, “keeping profits where they are doesn’t look all that difficult, which makes stocks today quite reasonably priced.”

This whole globalization thing has been going on for a long time. As far as taxes go, Surowiecki cites 50% rates from the ’50s and 30% rates from the ’60s. There have been plenty of booms and busts in the present tax environment. He acts like the decline of union labor happened yesterday. The peak for union labor was 35% of the U.S. workforce in the mid-’50s. It was down to just over 20% in 1983. It’s been in the teens as a percentage of the workforce since the 1990s.

He makes the same mistake other pundits and investors make. A mistake Mark Skousen pointed out years ago in his book Investing in One Lesson — Wall Street is not Main Street. “A stock is a unique entity; its price is affected by factors different from those that determine the value of an individual company.” Skousen emphasizes, “Remember: The business of investing is not the same as investing in a business.”

At market tops, there are always ways to rationalize higher prices. Whether the subject prices are for tulip bulbs, houses, stocks, bonds, country club memberships, or baseball cards. Fools can always imagine greater fools. And fools can always find financing, until they can’t. For now, New York Stock Exchange margin debt, which is money used to leverage bets on stocks, in April eclipsed the previous all-time high set in July 2007.

And while Surowiecki contends the market is no “house of cards, held up by easy money and investor delusion,” Ben Bernanke has made no bones about trying to elevate markets with money that may not be easy, but is certainly cheap, believing people with improving wealth will start spending. Bernanke wants savers out of cash chasing stock market returns.

However, Alec Macfie writes in Laissez Faire Club selection Theories of the Trade Cycle that gains made in stock trading spent on consumption “represent nothing but exaggerated hopes.” Macfie quotes R.G. Hawtrey “toward the end… people… were using their resources to back nothing more substantial than a continuance of the good luck which had brought big gains to their neighbors.”

One investor who has made boatloads in his career thinks now is the time to sell, not buy. Leon Black of the Apollo Group shops for value but can’t find any. While participating on a panel of investing stars at the recent conference of private equity managers put on by the Milken Institute, Black said, “We think it’s a fabulous environment to be selling into. We’re selling everything that’s not nailed down in our portfolio. It’s almost biblical — you know, there’s a time to reap; there’s a time to sow — and right now we are harvesting.”

Resource investing guru and Vancouver favorite Rick Rule points out often that an investor can either be a contrarian or a victim. Mr. Surowiecki wants to make you believe that it is the bulls who are the contrarians. However, stock indexes and margin debt don’t make highs at (or near) market bottoms.