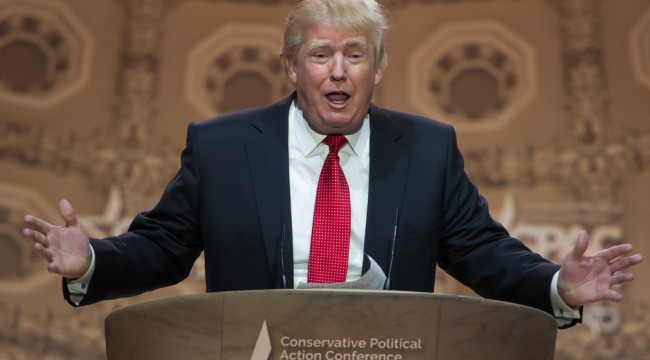 The mainstream media are hyperventilating again over Donald Trump.

It’s not because The Donald berated another journalist or insulted someone’s wife again.

No, this time it’s because he had the nerve to be honest about the state of the U.S. economy.

Trump recently told TheWashington Post that the U.S. is on the verge of a “very massive recession.”

He warned that the U.S. economic condition is perilous, with $19 trillion in debt, a massive stock market bubble and sky-high unemployment masked by statistical manipulation.

Now, you know me, I’m no fan of market predictions.

But I think we can all agree there’s something fishy going on in our economy. And it’s something that goes far deeper and is far more sinister than it first appears…

A Massive Shift in Wealth and Power

In recent decades, we’ve seen the hollowing out of the middle class… repeated financial booms and busts… unprecedented government debt levels… record numbers of workers exiting the workforce… the decline of manufacturing… stagnant wages… and skyrocketing health care and education costs across America.

These things didn’t happen by accident. They weren’t caused by natural economic cycles.

You see, while both political parties have distracted their voters with fights over social issues like gay marriage and abortion, a massive shift of resources and power has occurred in the U.S.… and it’s gone largely undetected.

Its seeds were sown with the formation of the military-industrial complex in the 1950s.

Together, they’ve formed what’s referred to as the Deep State. It’s a shadow network of institutions that run the country no matter who is in the White House… and without the consent of voters.

It doesn’t matter which party is in power. Both serve the interests of and benefit from the Deep State’s unmitigated control.

In recent decades, this incestuous relationship has produced scores of new regulations, subsidies, privileges and payoffs that ignore the needs of average people while benefiting the elites.

And as each year has passed, more money and influence has flowed from the productive working classes to the Deep State.

This manipulation has led to the deindustrialization of the U.S. economy. Middle-class manufacturing jobs that once supported tens of millions of American families have been sent abroad.

Productive industry has been replaced by the financial sector’s rise, which has led to trillions in new debt and risky financial derivatives as far as the eye can see — fattening the wallets of the well connected… but doing little for the rest of us.

Zero interest rates have been great for Wall Street and big banks. But they’ve destroyed the lives of millions of retirees who once depended on interest income.

And the continual roller coaster of booms and busts resulting from the Fed’s easy-money policies has wiped out millions of 401(k)s.

This perverted system makes those connected to the Deep State rich but does nothing for real Americans.

The stats are brutal:

The Game Is Rigged

The American people know the game is rigged, which is why Trump has been filling arenas across the country.

His message strikes at the heart of the rigged system. And millions of Americans are listening closely. They want to tear it all down.

But defeating the Deep State will be almost impossible. These are the most powerful people in the world. And they’ve been entrenched for years.

They run the show. They’re the real owners of America. The president and politicians are mere marionettes, not the true puppet masters.

So what can you do as an individual if the status quo remains?

You can embrace the boom-and-bust markets that come with Deep State manipulation.

We have a strategy that can help you protect and even grow your wealth in this challenging market environment.

I’m very passionate about the topic of the Deep State… because I think too many Americans naively believe their votes are going to change this state of affairs. They won’t. So the focus should be on finding ways for you to prosper in this warped reality.

Stay tuned for more on this topic in the future.

And let me know what you think about our rigged system. What’s the best way to deal with the Deep State? Do you see a way out? Please send your comments to coveluncensored@agorafinancial.com.