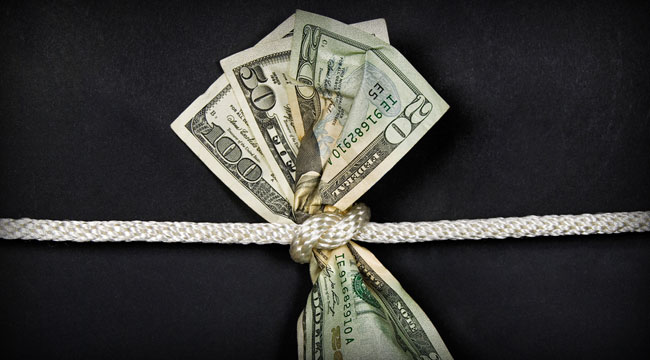 In an otherwise opaque report just released by the Bank for International Settlements (BIS), a central bank organization comprised of more than 60 central banks, it noted that “As rising dollar debt and increased exposure to global financing flows have affected the demand and supply of foreign currency, financial stability has become an increasingly important motive for interventions.”

The trouble is, in the face of continued central bank meetings, the dollar is positioned to be left behind as the staple currency of the world.

Tough talk from central bank governors is the norm, but talk is cheap.  Their actions, even cheaper. Expect financial liquidity throughout markets to leave interest rates on a path to be altered lower and the dollar to weaken further.

The Bank of Japan (BoJ) is anticipated to report on its quantitative easing (QE) and negative interest rate programs together with continued policy decision announcements.  It convenes on in Tokyo on September 21, in a double feature with the Federal Reserve’s (Fed) September two day meeting in Washington.

What does this mean in the face of a potential interest rate hike from the Fed?

The likeness is not an aggressive sell off of U.S dollars. But watch the BoJ for clues on what may come for the U.S dollar.

In a recent Financial Times piece, economic experts from around the world are puzzled. “Expectations are all over the place,” said Frederic Neumann, co-head of Asian economics at HSBC. He said, “the BoJ is at best going to tinker with its existing framework, not introduce a major overhaul.”

While the BoJ might have some surprises up its sleeve that could come in Wednesday’s announcement, watch the dollar for the real story.

The U.S dollar has reached its strongest level since July following a report that indicated above-forecast inflation following the Fed meeting this week.  The market has been bullish on dollars. Change is in the air.

The Fed has already made one interest hike in December 2015, so the possibilities for QE seems to be off the table.

Enter into the equation the next best thing…

The European Central Bank (ECB) and the BoJ have both come to party.

Both the ECB and BoJ have continued policies that are QE extensions, morphs of programs supporting QE or quite literally paying banks to loan money.  This type of central bank spending has opened the floodgates on a massive amount of liquidity.

The central banks do have an end goal here.  The objective is to get domestic investors to go abroad with their liquid investments.  Ultimately, they aim to target outflows of currency from the Eurozone and Japan into emerging markets.

While the Fed will receive considerable attention in domestic media, the BoJ meeting will be worth paying attention to.  It will offer clues on global liquidity and how central banks may look for alternatives to the dollar.

In the face of a Federal Reserve and that is constantly pulling the chair out from under domestic and international markets, those looking at monetary policy are left scratching their head. According to Jim Rickards, the International Monetary Fund’s (IMF) world money currency, formally known as Special Drawing Rights (SDR), offers a direct threat to “King Dollar.”

Rickards writes, “The hidden agenda involves the formal transition from a dollar standard to an SDR standard in world monetary affairs. It won’t happen overnight, but the elite decisions and seal of approval will take place at these meetings.”

He goes on to say that, “The SDR is a source of potentially unlimited global liquidity. That’s why SDRs were invented in 1969 (when the world was seeking alternatives to the dollar), and that’s why they will be used in the imminent future.”

This world money has an all new member that is being welcomed into its currency club and destined to change the direction of the dollar.

At midnight on September 30, China enters the IMF’s world money “basket” and will be the fifth member state to be a part of the weighted currency.  The U.S dollar, Japanese yen and ECB Euro regional currency are already a part of this exclusive club.

This means that dollar supremacy is under a real international peril.  Not only will the SDR be the world money threat to the dollar, it will offer a new alternative in the face of the next crisis.

This is important because, as the dollar becomes the lesser staple currency and reduced as a primary trade driver, the ECB and Japan could be the catalyst for such movement.

As major financial media discuss at length the steepening yield curve (10 year bond dropping), the real storyline is investors taking up alternatives to the dollar.  Statements from the BoJ could show where rates, investments and the SDR are headed.

Sell the rumors and buy the facts.

As the markets continue to shift, the dollar can only drag on so far.