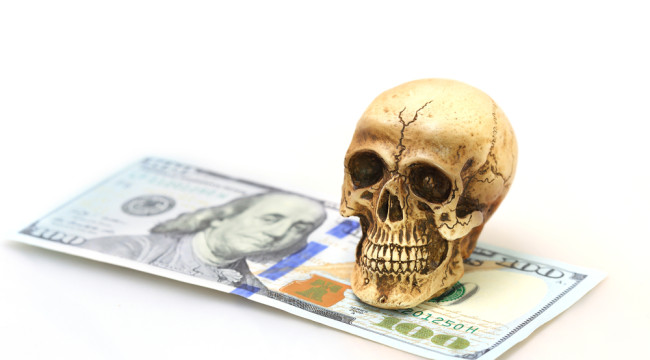 The alarm bell you’re not supposed to hear is getting louder and more insistent.

“There’s an old saying in the stock market that when prices are about to collapse, ‘nobody rings a bell,'” Jim Rickards reminded us here in The 5 nearly a year ago.

“Yet sometimes, the global power elites do ring a bell. But they ring it for the wealthiest and most powerful individuals only. Everyday investors like you are not intended to hear it.”

Jim was referring then to a passel of reports from the likes of the International Monetary Fund and the Bank for International Settlements. They’re written “in highly technical language and were read by only a relatively small number of expert analysts,” Jim said.

They come with vanilla titles like Uneven Growth: Short- and Long-Term Factors. Snooze…

“Some of these reports may have been picked up and mentioned briefly in the press, but they didn’t make the front pages. For you, such pronouncements are just more financial noise in a flood of information that washes over you every day on TV, radio, the Web, in newspapers and in other publications.

“The power elite were not signaling you — they were signaling each other.”

Over the weekend, the signals became more accessible to a wider audience. 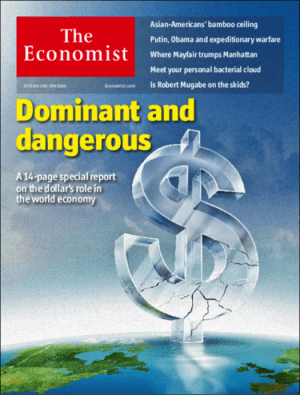 The Economist has long served as a transmission belt of ideas as they move from global elites down to the worker bees in big finance and big government throughout the Western world. It sets the agenda for the people who carry out that agenda.

“For 70 years, the dollar has been the superpower of the financial and monetary system,” says the editorial accompanying this week’s 14-page special report. No vanilla language here: It concludes, “the costs of dollar dominance are starting to outweigh the benefits.”

“A fault line has opened between America’s economic clout and its financial muscle,” the editorial goes on. “The United States accounts for 23% of global GDP and 12% of merchandise trade. Yet about 60% of the world’s output, and a similar share of the planet’s people, lie within a de facto dollar zone, in which currencies are pegged to the dollar or move in some sympathy with it.”

We’ve seen some of the unfortunate results this past summer: “In recent months, the prospect of even a tiny rate rise in America has sucked capital from emerging markets, battering currencies and share prices. Decisions of the Federal Reserve affect offshore dollar debts and deposits worth about $9 trillion.”

If the figure $9 trillion sounds familiar, that’s the number Jim Rickards has cited time and again during his own warnings here in The 5 going back to last January.

But there’s a worse problem: “In 2008-09, the Fed reluctantly came to the rescue, acting as a lender of last resort by offering $1 trillion of dollar liquidity to foreign banks and central banks,” the editorial continues.

“The sums involved in a future crisis would be far higher. The offshore dollar world is almost twice as large as it was in 2007. By the 2020s, it could be as big as America’s banking industry.” And as Jim has pointed out recently, the Fed cannot possibly handle a bailout of those proportions… because the Fed is broke.

“And even without a crisis,” the editorial goes on, “the dollar’s dominance will present American policymakers with a dilemma. If foreigners continue to accumulate reserves, they will dominate the Treasury market by the 2030s.

“To satisfy growing foreign demand for safe dollar-denominated assets, America’s government could issue more Treasuries — adding to its debts. Or it could leave foreigners to buy up other securities — but that might lead to asset bubbles, just as in the mortgage boom of the 2000s.”

Wait a minute: That too would set off another crisis, right? So every possible route ends in a crisis that the Fed can’t handle.