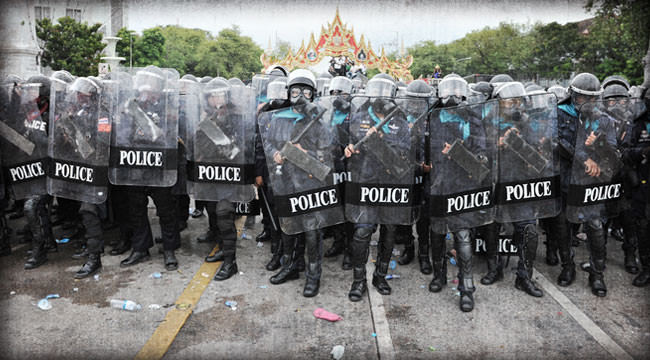 Detroit's Bankruptcy According to Sesame Street

“We’ve had amazing human experiments throughout history,” Peter told us yesterday over Pinot Grigio and Yuengling. We were discussing the topic that has had us preoccupied for many months: Who improves peoples’ standard of living? Is it government… entrepreneurs…some combination of both?

“North and South Korea… West and East Germany… Hong Kong and China…” Pete continued, “in each case, geographic lines were just arbitrarily drawn… and two completely opposite social and economic systems were set up.”

“We learned a few things from these experiments, too. No one left West Germany for East. No reports were made of South Koreans tiptoeing through landmines to get to North Korea. And if people from Hong Kong went to China at all it was probably to see the Great Wall… and maybe take photos of poor farmers like they would zoo animals.”

Why was that? we wondered as we took a few sips of our wine.

“Maybe cities are a good place to look for answers”, Pete offered. “They’re like miniature economies all to themselves. They’re a dense grouping of capital — physical, human and social. And there are a wide range of them. Some good… and some not.” Hrm…

We kicked the idea around some more and only came up with more questions So, we finished our drinks and left the bar. Then, this morning, while perusing the UK’s Guardian, the following headline caught our attention: “Detroit accused of exaggerating $18bn debts in push for bankruptcy”

Digging in, we read that Detroit pensioners, whose benefits ballooned to a $3.5 billion liability could be cut down to 16 cents on the dollar. Go figure, the report said pensioners don’t like that very much. They argue that yes, $3.5 billion is a tidy sum of debt to pay off… but it’s only bad because the city’s income is so low.

“The real issue for Detroit” according to Walter Turberville from the Demos think tank, “is not its debts but declining revenues as a result of its rapidly falling population. The city’s had close to 2 million residents in 1950 and 714,000 in 2010. During the recession, unemployment and the property crash exacerbated Detroit’s revenue woes. Since 2008 the city’s revenues have fallen by over 20%. This year it will have a budget shortfall of $198 million.”

But if there’s a budget shortfall… it wasn’t for lack of city hall trying to increase revenue. In fact, it may have been revenue grabbing that was the culprit for budget shortfalls in the first place.

As we wrote in these pages back in July, when Detroit first declared bankruptcy:

Detroit was the fourth-largest city in the nation. As people left, the tax base shrunk. To keep revenue up, taxes were raised on things that couldn’t be moved out of the city limits, like property.

Because of high property taxes, people stopped improving buildings. Eventually, it wasn’t worth it to pay the property taxes. So people just left for greener pastures in taxpayer-friendly jurisdictions. (As we look out the window of our office here in Baltimore… we can’t help but see the same thing happening.)

It was a Pyrrhic victory. City hall continued to keep up revenues by raising taxes. People continued to leave with their money and businesses. Basic services like police and fire safety suffered heavy cuts — much like our mother-of-all financial bubbles scenario. 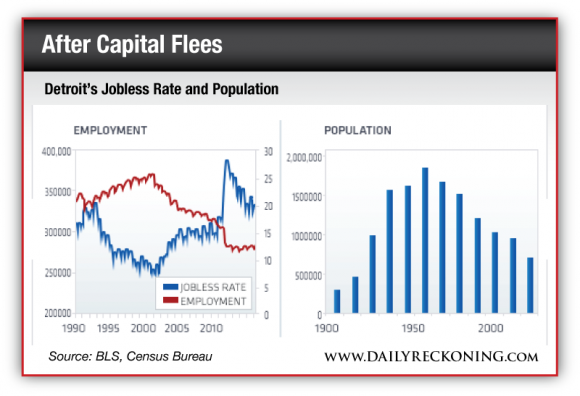 Here’s a comparison of the effective property tax rates in Detroit… versus the average across 50 U.S. cities. We’re sure it has absolutely nothing to do with Detroit’s declining population: 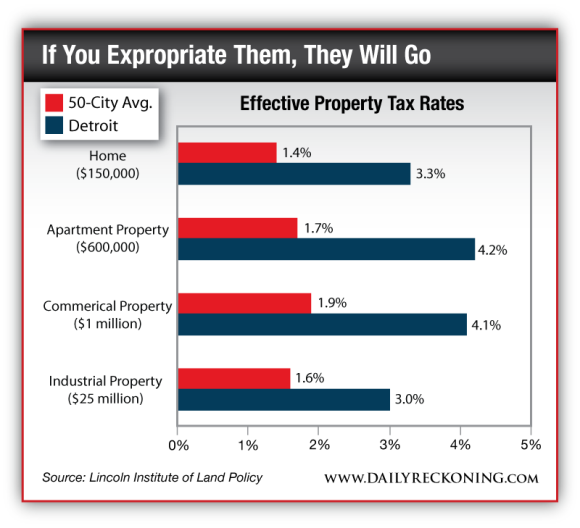 What was that song from Sesame Street? One of These Things is Not Like the Others? Heh. Hold onto that for a moment… Something else crossed our radar this morning that fits in nicely at this point:

“French farmers snarled traffic into Paris as they drove tractors onto highways to protest against taxes and new regulations” wrote Bloomberg’s Gregory Viscusi this morning. “The action is the latest in tax revolts in France, which in recent weeks has seen horse-riding clubs, truckers and small retail outlets protesting against increased levies by President Francois Hollande’s government.”

Heh… France, like Detroit also has the problem of too much deb…err, excuse us, not enough revenue. We recall when we lived in France. The politics of debt and taxes was so ingrained in their society that there was a general strike or greve generale what seemed like every other day. Here was a picture taken on the scene of one: 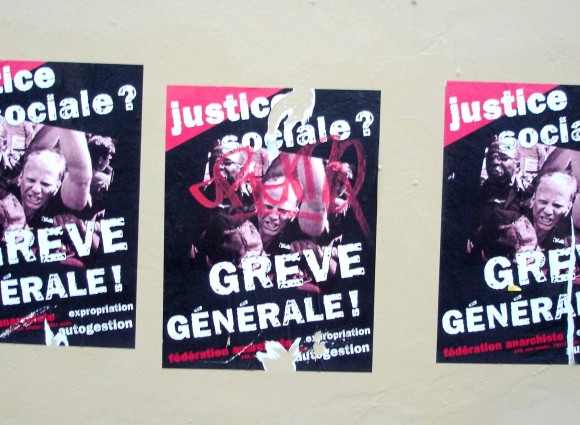 These things were so common that kids used to actually look forward to them. They didn’t even understand the issues. To them, it was an opportunity grill chorizo in the back of their trucks while blasting technopop right outside of our office on the rue Rivoli. The strikers were happy to not be working even if their strikes didn’t work. And everyone else? They were more or less annoyed that they could travel on the rue Rivoli because of it. Seems like not much has changed.

In France, the top tax rate is 75%. Back in 2011, nearly 12,000 families paid that rate… another 8,000 families paid more than 100% of their income in taxes because of a one-time levy. Maybe that explains the riots. It might also explain why in 2011, there were 10,456 Frenchmen registered as residents of Hong Kong. It used to be that the French headed westward when they wanted to escape taxes. Now, apparently Asia is increasingly becoming the preferred destination.

According to the French Consulate in Shanghai, 40% of their expatriates were working under a local contract in 2008; they were 55% in 2012. Local contracts allowed the expat to stay in the country after their work contract was up.

The larger lesson we’ve taken away from it all? Whether it’s Detroit’s population decline or French expatriation, if you expropriate them… they will go (and those left will riot). As the debt piles higher… we expect that expropriation will be the go to strategy for cash-strapped governments. Luckily for innovators, attracting capital even if the owners of it have been driven out of town.

Ed. Note: In the end, Detroit and France each have their own story to tell, and their own lessons to impart. Stay tuned for more on these and other developing stories in The Daily Reckoning email edition. Sign up for FREE, right here.