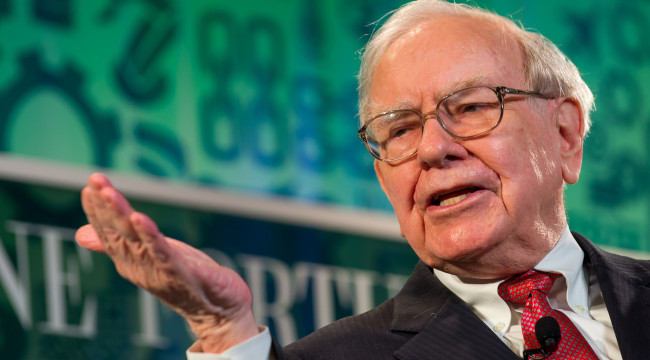 Destroying the Myth of Warren Buffett

Warren Buffett released his annual letter to Berkshire Hathaway shareholders this past weekend.

I’m sure everyone in the business world will dissect every word in the letter. They will try to draw assorted inferences from every vowel and consonant.

I won’t be one of them. Laced Kool-Aid is not my thing. No cult for me.

See, Warren Buffet has been positioned as the buy and hold/value guy. He is “safe”. Simply follow his strategy, and you too have a chance to become the next Warren.

He has not done much to counter that view.

But that is dead wrong. Here’s why…

“[Buffett] is the greatest PR person of recent times. And he has managed to achieve a snow job that has conned virtually everyone in the press to my knowledge…and [it] is remarkable that he continues to do it.”

Indeed, he’s a great PR person. Which is not necessarily bad.

But he’s led everyone to believe that anyone can be a buy and holder just like him.

The truth is you cannot do what Warren Buffett does. He is the consummate unicorn. He is it, the one and only. Where are the other Buffett clones?

He doesn’t even make his money only from markets movements. Instead, he takes control of companies and sets performance targets.

He then uses their cash reserves for even more acquisitions.

This is why he buys insurance firms, which have massive free cash flow (known as float or what I call the “money spigot”). Obviously this has nothing to do with trading.

Buffett is Not Simply a “Buy and Hold” Guy

Don’t get me wrong. I am not criticizing how he makes money. I salute him!

But the legend that he’s simply a “buy and hold”, value stock picker is 100% false.

Buffett is complex with a very complex firm. For example, he trades serious size in currencies and utilizes special derivatives created by Goldman Sachs (do you have access to those?).

There is nothing wrong with that, but the thousands who attend his annual shareholder meetings do not know that.

Or if they do know, they turn their brains off and pretend all of these complicated strategies are buy and hold.

Interestingly Buffett was once squarely against derivatives. He is on record saying:

“We have more money than ideas…one place the money certainly won’t go is to derivatives. There’s no place with as much potential for phony numbers as derivatives.”

“To say that derivative accounting is a sewer is an insult to sewage.”

Shortly after those statements, Buffet’s firm sold $400 million of a new type of derivative security in a private placement to qualified institutional investors.

To confound us even more, a year after Buffett declared:

“Derivatives are financial weapons of mass destruction, carrying dangers, while now latent, [but] potentially lethal. We view them as time bombs, both for the parties that deal in them and the economic system.”

There are new ones every year. I have lost count at how many people have made a fortune on this false propaganda.

It’s shocking that when Buffett launches a new derivatives strategy square against his legend, either no one notices or those who do notice refuse to criticize.

Why I’m Not Drinking the Buffett Kool-Aid

A few years back, I sat down with a trend following trader. He has a 20- year plus track record making on average more than 20% a year.

The topic of Warren Buffett came up during our discussion. While he was very respectful of Buffett, he was bewildered how some could call his trend following trading luck, but those same people could see Buffett as skill.

He saw it more logical to make an argument for Buffett’s success as luck given the relatively few trades that made him so wealthy: Coke, Gillette, American Express, Goldman Sachs, and Wells Fargo to name a few.

Again, I salute Buffett’s success, but my issue is that major media lies about how he actually became so successful!

As someone who grew up in the Washington D.C. area, I have watched politicians use and/or abuse the political system to their own economic advantage on a regular basis.

In the fall of 2008, Buffet received political favors and influenced government in ways that no trend following trader ever could. It was disgusting.

And there was also the David Sokol situation, a top executive of his who resigned under odd circumstances resembling insider trading.

For many reasons, the idea of Buffett as the avuncular straight talker has become harder and harder to accept at face value. Constantly staged photo shoots with Buffett and ice cream cones? Come on.

Buying into the false Buffet legend is not part of my ethos.

Salute him as a great American success story, yes. But don’t drink the Kool-Aid that his success was all buy and hold, and that you too can be the next Buffett.

Buffett Can’t Buy This Stock… But You Can!

Warren Buffett pulled a complete 180 on airlines over the last decade. But today, Jody Chudley is revealing a stock that even Buffett wishes he could invest in…