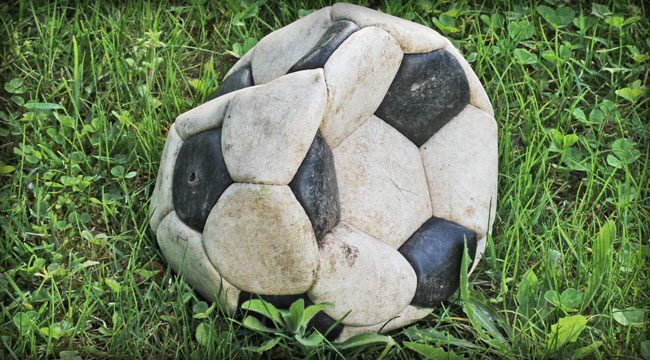 Ever notice how empty space tends to get filled? If there is a storage container or shelf somewhere in your house, something tends to find its way there over time. In abundant societies, it seems people just accumulate stuff. I remember a National Geographic picture segment illustrating household possessions in different societies. One household in an African country only owned things necessary to eat and drink. The wealthier society’s household possessions overflowed their yard. Interestingly enough, when we try to sell our extra stuff in garage sales (to create room for other stuff), some other person buys it to fill their empty space. Ok, I may be exaggerating here.

This is the problem for central banks today. The central banks created so much space that depository institutions are putting a bunch of stuff into central bank storage. What is this stuff to which I refer? Money!

Depository institutions are required to keep a certain percentage of their deposits in storage with the Federal Reserve (Fed). After the financial crisis, the amount kept on deposit with the Fed understandably increased. Banks also kept an “excess” amount with the Fed, over and above their legal requirements. These are called excess reserves. You might ask why a bank would want to keep excess reserves with the Fed when they could simply create new loans with those funds. 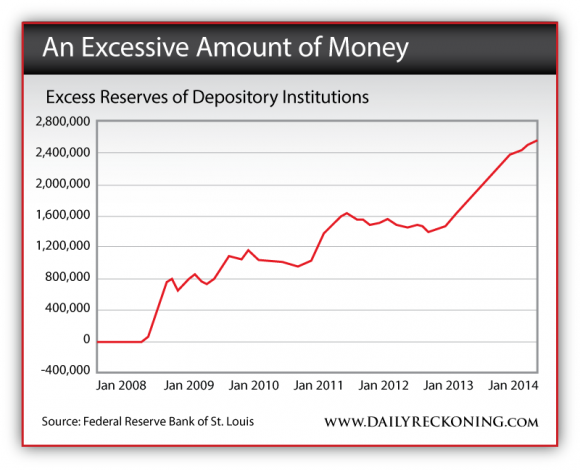 The European Central Bank (ECB) adopted the same approach by creating a bunch of storage space too. European banks are loaded with extra Euros stuffed in ECB coffers. Similar to the Fed, the ECB paid banks interest on excess deposits. This creates risk free return for the Euro region bankers as well. You could just as easily raise the question about why European banks would rather park their cash in central banks rather than loaning it and making a profit that way. The overstuffed ECB might not be a concern except for the one thing (well maybe more than one) that keeps central bankers up at night – deflation.

The “D” word is not something you will hear many talk about openly. It is a little understood topic since most alive have not experienced it. Deflation is the reduction of money and credit outstanding. Storing money in central bank coffers, and piling greater and greater cash in that storage is a component of deflation. Deflation has two components. One is monetary and the other is psychological. In the case of the U.S. and European overstuffed central banks, the money appears to be there for loans, but banks want to store their excess funds where they are paid a small risk-free return. This is where the psychological component of deflation comes into play. Banks do not have the confidence to loan and their central banks have reinforced the lack of confidence by paying them a small interest rate. The other side of the deflation coin is a pool of borrowers who may be unwilling to take on more debt. In our credit-based society it takes two parties to dance this tango. One party borrows and the other party lends.

The Euro zone inflation rate is now near zero. In the U.S., inflation is quite tame. If consumers and businesses are unwilling to borrow and spend in order to keep inflation higher, what options are available? One option would be to lower interest rates. That bullet got fired awhile back – interest rates are quite low. The psychological component is operating here as well – ultralow interest rates are not coaxing borrowers at the desired rate in Europe. What if you forced banks to get their “stuff” out of central bank storage? This would be akin to forcing your family to plan a garage sale and if they didn’t comply you would charge them a storage fee (there goes the allowance). In other words, you want to get that stuff you have in storage back in circulation. But how do you force a bank to get their own stuff out of central bank storage?

The ECB game up with a plan to do just that. It will now charge banks to hold their stuff! Instead of paying a small rate of interest for deposits, the ECB will levy a -0.1% interest rate to hold bank cash. For the banks, they must get money out of storage or face a penalty. The thought is to get banks to provide loans to businesses or consumers and get money flowing through the Euro economies. This extra money would chase goods and services and hopefully produce at least some inflation. Well there is one problem with this approach and that is, once again, the psychological component of deflation – getting people or businesses to borrow. Just because there is cash available to borrow does not mean someone will borrow. If loan demand was weak in Europe before, it is unlikely to perk up just by forcing banks to vacate the storage. You can lead a horse to water… Your family teed up the garage sale but no one will show up.

What will the Euro banks do if forced to move cash out of the ECB? Presuming a flock of borrowers does not show up, the banks may decide to invest these extra funds in something at least akin to getting a risk free rate of interest. This could very well mean short-term investments in European debt. Their funds could also flow to U.S. investments and thus push the U.S. Dollar higher.

At the moment, there is no call for the Fed to assess a negative interest rate on excess funds for U.S. banks. While the deflation winds are blowing in the U.S., they have not reached Euro speeds yet. Herein lies the problem for the Wizards. They have tried every tool at their disposal and yet they still fear that ugly “D” word. By not allowing world economies to experience their catharsis in 2008 and beyond, we now have all this extra stuff that no one seems to want. The Wizards will have to come up with a new way to get people to their garage sale.

Ed. Note: The excess reserves problem is something most people don’t consider. But when all this money eventually flows back into the financial system, there could be a whole new line of investment opportunities no one even considered. Make sure you’re on the right side of every trade. Sign up for the Daily Reckoning email edition, for FREE, right here.

It’s no wonder there’s a global rush to buy gold and other precious metals and invest in basic resource plays. Byron King explains…