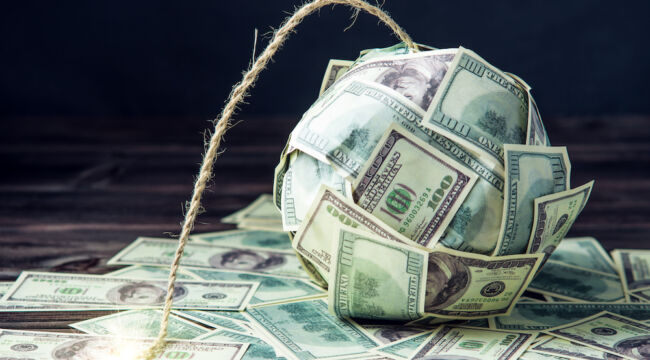 The Fed kicked off its two-day meeting today in Washington. The most likely outcome is a 0.75% rate hike, which would bring the Fed’s target rate to between 3–⁠3.25%.

The stock market was down significantly today ahead of tomorrow’s announcement. Importantly, the 10-year Treasury yield rose to 3.57% today, the highest level in over a decade.

Rising yields are especially bad for growth stocks, which have accounted for many of the market’s gains in recent years.

Meanwhile, the Atlanta Fed has once again downgraded its third-quarter growth estimate to 0.3%. Its previous estimate was 0.5% and its estimate before that was 1.3%. Just look at the trend.

As I’ve argued repeatedly, the Fed is tightening into weakness. It’ll keep tightening until something breaks.

The Proof Is in the Pudding

Tomorrow’s rate hike will be the fifth consecutive rate hike, and the third consecutive 0.75% rate hike. It’s an indication the Fed is serious about cooling the economy and withdrawing its easy-money stimulus. As a result, stocks tend to crash. You just need to look at the market’s performance this year.

The stock market has suffered declines of 1% or more on one-fourth of all trading days so far this year. According to data from Bespoke Investment Group, the only other post-WWII years with more days with 1% losses were 1974, 2002 and 2008.

Actually, the Fed has already crossed into the danger zone. History says that the third consecutive rate hike is the kiss of death.

This is known on Wall Street as the “three steps and a stumble” rule. It was discovered by the economist Edson Gould in the 1970s.

He noticed that when the Federal Reserve hiked either interest rates, reserve requirements or margin requirements three times in a row, the stock market tended to roll over and crash.

And according to textbooks written on the subject, this pattern has preceded every single crash in history with only two possible exceptions that could be debated. It might have been a year too early for the 1929 crash and a little too late to call the exact top in 1978.

But this single indicator has a nearly 100% accuracy rating going all the way back to 1919.

The bottom line is practically every time the Fed has tried to raise interest rates, the market has crashed.

And now the Fed’s about to announce a fifth consecutive rate hike (I strongly urge you to watch my critical market warning before tomorrow’s announcement.

At What Point Do Things Break?

The Fed’s target rate is on track to exceed 4% by the end of the year. Going from 0.0% to 4.0% or higher in 10 months from March to December is the fastest set of rate increases since the Paul Volcker days in the late 1970s and early 1980s.

The Fed is also accelerating its balance sheet reductions this month, to $95 billion a month. That’s important because that reduction equates to another 1% hike in interest rates in terms of its impact on the economy.

Putting that QT on top of the projected rate increases means the effect of monetary tightening will be over 5.0% rate in 10 months.

That’s also the steepest hike in interest rates since the 1980s. When the Fed started QT in late 2017, they urged market participants to ignore it. They said the QT plan was on autopilot, the Fed was not going to use it as an instrument of policy and that it would “run on background” just like a computer program that’s open but not in use at the moment.

It was fine for the Fed to say that, but markets had another view, which resulted in the “Christmas Eve Massacre.”

The Fed was raising rates and reducing its balance sheet when on Dec. 24, 2018, the stock market tanked, and proceeded to fall 20% in 2½ months. The Fed panicked and pivoted again to monetary easing.

We can expect a repeat at some point, but we’re nowhere near there yet (sorry, Wall Street).

Obviously, the Fed is trying to crush inflation by reducing demand in the economy.

But as I’ve argued before, they’re focusing on “demand pull” inflation where consumers are buying in anticipation of even higher inflation to come. But the inflation we’re seeing is called “cost push” inflation.

This comes from the supply side, not the demand side. It comes from global supply chain disruptions and the war in Ukraine.

It’s critical to understand the difference between “demand pull” inflation and “cost push” inflation, which is why I keep emphasizing it.

Since the Fed has misdiagnosed the disease, they are applying the wrong medicine. Tight money won’t solve a supply shock. Higher prices will continue. But tight money will hurt consumers, increase savings and raise mortgage interest rates, which hurts housing among other things.

The Fed’s track record of using the wrong models, using flawed models and doing the wrong thing at the wrong time remains intact. The Fed’s tightening will sink stock markets and slow the economy even further.

It’s a huge mistake, but the Fed will do it anyway. It really has no clue about the real world. I’m a big critic of the Fed models because they’re obsolete and they don’t accord with reality.

When the Fed realizes its mistake of tightening into economic weakness, it will have to turn on a dime and shift to an easing policy. Easing will come first through forward guidance and pauses in the rate hike tempo, then possibly actual rate cuts back to zero and finally reversing its balance sheet reductions by expanding the balance sheet through more QE.

Then the cycle will start all over again, with the same predictable results.

The lesson is one that I’ve been preaching for years: When the Fed tries to normalize, they can’t do it. They’re caught in a trap of their own creation, with no way out, or at least no easy way out without causing a lot of pain and misery.

Unfortunately, you can expect more of both in the days ahead.