Benjamin Franklin supposedly said, “In this world nothing can be said to be certain, except death and taxes.”

If old Ben were still around he would surely add “debt” to his famous saying. Indeed, a recent Experian study of its 220 million consumer files actually proves the case.

It turns out that 73% of consumers who died last year had debts which averaged nearly $62,000. In addition to the kind of debt that apparently always stays with you — credit cards and car loans — it also happened that 37% of the newly deceased had unpaid mortgages and 6% still had student loans with an average unpaid balance of $25,391!

Once upon a time people used to have mortgage burning ceremonies when later in their working years the balance on the one-time loan they took out in their 30s to buy their castle was finally reduced to zero.

And there was no such thing as student loans, and not only because students are inherently not credit worthy. College was paid for with family savings, summer jobs, work study and an austere life of four to a dorm room.

No more. The essence of debt in the present era is that it is perpetually increased and rolled-over. It’s never reduced and paid-off.

To be sure, much of mainstream opinion considers that reality unremarkable — even evidence of economic progress and enlightenment. Keynesians, Washington politicians and Wall Street gamblers would have it no other way because their entire modus operandi is based not just on ever more debt, but more importantly, on ever higher leverage.

The chart below not only proves the latter point, but documents that over the last four decades rising leverage has been insinuated into every nook and cranny of the U.S. economy.

My point today is not to moralize, but to discuss the practical implications of the nation’s debt-topia for Ben Franklin’s other two certainties — death and (especially) taxes.

There’s no doubt that the modus operandi of the American economy has been transformed by the trends displayed in the below chart.

It so happened that the 1.5X ratio of total debt-to-income (GDP) at the beginning of the chart was not an aberration. It had actually been a constant for 100 years — except for a couple of unusual years during the Great Depression.

It was also linked with the greatest period of capitalist prosperity, economic growth and rising living standards in recorded history.

First, the nation effectively performed a leveraged buyout (LBO) on itself during the last forty years. And that did temporarily add to the appearance of prosperity.

But it also means that the U.S. economy is now lugging two turns of extra debt compared to the historic norm. Mainstream opinion, of course, says “so what?”

The U.S. economy is lugging $35 trillion of extra debt, that’s what.

That’s right. In the absence of the 40-year leverage aberration since the late 1970s, the chart below would show about $29 trillion of credit market debt (public and private) outstanding, not $64 trillion. 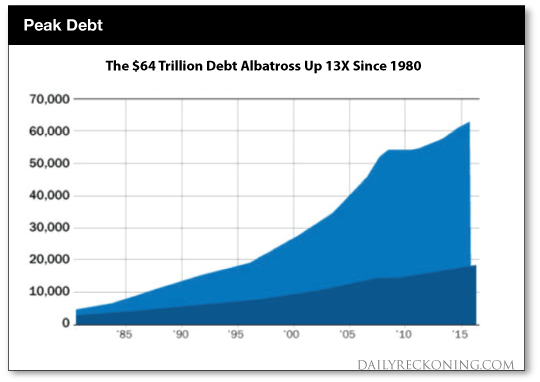 The soaring leverage ratio of recent years came at a heavy price — and one which Keynesians and their camp followers simply refuse to acknowledge:

Today’s added leverage and the incremental spending it currently finances eventually become tomorrow’s higher debt service cost and reduced spending. In fact, the latter is already occurring. And that’s the reason I call the chart below “The Great Inverse.” 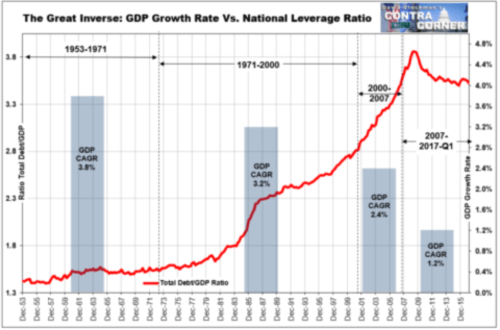 The trend level of real GDP growth captured by the gray bars has been heading south since the early 1970s. And during the last 10 years it’s averaged only 1.2% annually, or just one-third of the 3.8% average recorded during the American heyday (1953-1971).

This stunning deterioration occurred precisely as the national LBO hit full stride (red line), rising from the historic 1.5X to the current 3.5X.

Ultimately, all this debt and financial suppression is the enemy of investment and productivity.

It encourages massive financial engineering in the form of stock buybacks and merger and acquisition (M&A) deals. This diverts economic resources from productive investment on main street to leveraged speculation in existing financial assets on Wall Street.

The retail sector, for example, was the site of massive borrowings to fund share buybacks and LBOs — until Amazon knocked over the house of cards, causing what I call Retail Armageddon. The retail sector will see upwards of 30,000 store closures over 2016-2018 alone.

We’ve also seen massive debt envelop the auto sector, which is nearly $3 trillion. This is a sector that bears very close watching, as I believe it’s ready to implode any day now.

In short, the sum of business sector debt stood at $8.7 trillion on the eve of the great financial crisis. It now stands at $13.2 trillion. And that $4.5 trillion gain was not pumped into productive investments on main street.

The Fed’s reckless money printing is grinding down the U.S. economy’s growth with rising debt and higher leverage ratios — exactly the kind of causation that lies behind the Great Inverse chart.

And that gets us to death and taxes…

A surprisingly high share of today’s soaring medical costs are designed to ward off the former. But the overwhelming share of households have no savings or remaining debt capacity.

So they demand government help with their medical bills and sooner or latter we end up with Medicare, Medicaid,  tax subsidized employer plans ($200 billion per year) and Obamacare.

During the next decade, for example, upwards of $25 trillion or nearly 63% of personal health care costs will be financed by the programs listed above (including the state share of Medicaid).

The entire population has been driven into government financed or subsidized health insurance. And as these policies became increasingly socialist (i.e. based on community ratings and homogenized rather than risk-differentiated premiums), the whole system becomes more inefficient and costly.

But capitalism doesn’t work if you have no economic prices and no real consumers. What you get instead is price-insensitive patients and organized provider cartels, which attempt to maximize their incomes by lobbying public and private insurance payors.

The solution of government insurance then becomes the driving force of endlessly escalating government budgets.

There is not a snowballs chance in the hot place the system will be reformed any time soon because the baby boom gave itself an LBO. That is, 73% of the population going into its “final expenses” with $62,000 of debt.

In short, the national LBO of 1980-2017 has saddled the nation with a giant Welfare State (health care and retirement pensions) because the bottom 90% of the population has no material savings.

And financing that mushrooming Welfare State will mean, in turn, higher taxes and more public debt as far as the eye can see.

When you look at the Great Inverse chart above it becomes fairly obvious that even more debt and taxes will result in even lower economic growth. That will only necessitate even higher taxes and debt to pay for the Welfare State.

Benjamin Franklin also famously said at the end of the Constitutional Convention, “gentleman you have a Republic, if you can keep it.”

If he had known about today’s trifecta of death, taxes and debt, he might not have pronounced so boldly.