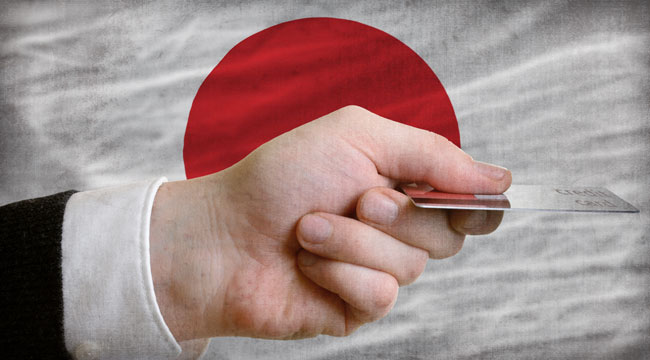 Debt works the same way for countries as for families and individuals. That is, if you borrow too much, your life begins to suck. And actions that in normal times might have seemed unwise, contradictory or downright stupid begin to look better than the (even more disturbing) alternatives.

…though you worry that such an aggressive “currency war” strategy involves some risk, it feels good to be doing something.

Pretend, for example, that you are Japan. You borrow huge amounts of money year after year to keep the zombie banks and builders created by an early-1990s asset bubble from imploding and decimating the rest of the economy. Your annual deficits are huge, your accumulated debt, as a percentage of GDP, dwarfs that of any other major country. And your population is aging rapidly, so you have at best a decade to start generating massive surpluses to pay retirees what they’ve been promised.

So you elect a president who bullies the central bank into creating enough new currency to boost economic growth and inflate away a big part of your debt. It works, sort of. The yen’s exchange rate falls immediately, just as you hoped it would, thus boosting exports. And though you worry that such an aggressive “currency war” strategy involves some risk, it feels good to be doing something.

But those deficits keep rising, which, government statisticians calculate, will increase the national debt at a rate that more than offsets the inflationary effects of easy money. So you’re not actually fixing anything. You’re just causing the savings of a whole generation to evaporate as the value of their government bonds plunge along with the currency.

How do you respond to that? Well obviously, say your leading economists, you raise taxes to lower the government’s deficit. You agree, and on April 1 boost the national sales tax by an amount sufficient, other things being equal, to take a serious bite out of the deficit.

Alas, higher taxes tend to slow economic growth, which pretty much offsets the central bank stimulus. So you find yourself even worse off than before. Not only have your aggressive, innovative policies failed, but everyone now realizes that 1) you never had the slightest idea what you were doing and 2) there’s nothing left to try in any event.

Then your people start behaving as people always do when they realize that their leaders are clueless and that events will henceforth progress according to the laws of nature and physics rather than politics: they buy gold. From Tyler Durden at Zerohedge.com:

As we reported yesterday, the world’s most clueless prime minister, Japan’s Shinzo Abe, has suddenly found himself in a “no way out” situation, with inflation for most items suddenly soaring (courtesy of exported deflation slamming Europe), without a matched increase in wages as reflected in the “surprising” tumble in household spending, which dropped 2.5% on expectations of a 0.1% increase in the month ahead of Japan’s infamous sales tax hike. How does one explain this unwillingness by the public to buy worthless trinkets and non-durable goods and services ahead of an imminent price surge? Simple – while the government may have no options now, the same cannot be said of its citizens who have lived next to China long enough to know precisely what to do when faced with runaway inflation, and enjoying the added benefit of a collapsing currency courtesy of Kuroda’s “wealth effect.”That something is to buy gold, of course, lots of it.

According to the FT, “Tanaka Kikinzoku Jewelry, a precious metals specialist, reported that sales of gold ingots across seven of its shops are up more than 500% this month. At the company’s flagship store in Ginza on Thursday, people queued for up to three hours to buy 500g bars worth about Y2.3m ($22,500). March has been the busiest month in Tanaka’s 120-year history.”

Of course, while the Japanese consumers know what is the best defense against runaway inflation and purchasing power destruction, the government also knows that just like in India, where massive gold imports to satisfy local demand so skewed the current account deficit that India spent most of 2013 imposing gold capital controls, it simply needs to make gold purchases impossible in order to redirect spending into more Keynes-approved products and services.

However, for now Japan is happy just to crush its population’s meager disposable income with soaring energy prices. Which also means the locals can allocate their personal capital in the most efficient way: one which discounts a very unpleasant future.

Investors are being drawn to the metal not just because of higher taxes, said Itsuo Toshima, an adviser to pension funds.“Slowly and steadily, people are preparing for the worst, which is the failure of Abenomics.” “To protect the value of wealth, gold comes into play as an inflation hedge, and if the economy goes back to deflationary circumstances then, again, money seeking safe havens would flow into gold.”

This post is the first in a series that will show the same process at work in every major country: Too much debt leads to increasingly-contradictory and irrational policies that, because they appear to be purposeful, lull the local populace into temporary complacency. But when the policies are revealed to be not only ineffective but self-negating and therefore really dumb, mass-disillusion sets in. Then the real fun begins, at least for precious metals dealers.