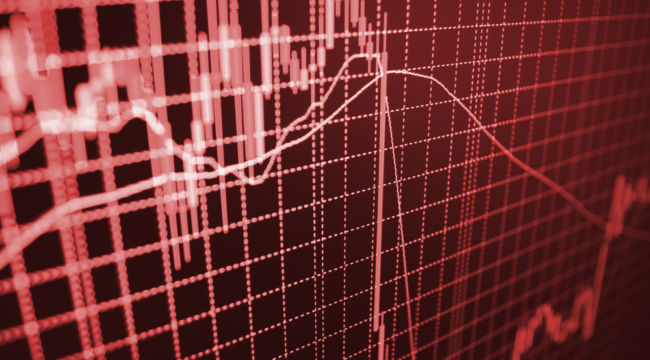 The flighty birds congregate in the stock market. The wise owls nest in the bond market.

The bond market will let you know where the economy is heading, say the veterans.

It will not be so easily deceived by the Federal Reserve’s false fireworks. With knowing eyes it penetrates the magician’s secrets… and exposes the fraud.

Savvy economic analysts have always known the bond market is the place to look for a real sense of where the economy is going, or at least where the smart money thinks it is going.

Where does the smart money — the owls — think the economy is going?

But first a glance at the futureless present… and the stock market.

Weakened global growth is one explanation widely on offer. Soft factory data out of Germany, in particular.

But come we now to the latest message from the bond market, not unrelated…

A lean season… and diminished prospects.

It reflects the structure of time in a healthy market.

The 10-year yield, for example, should run substantially higher than the 2-year yield.

For the reasons we needn’t look far…

And the further out in the future, the greater the uncertainty. So investors demand to be compensated for taking the long view.

Compensated, that is, for laying off the sparrow at hand… in exchange for the promise of two in the distant bush.

But when short- and long-term yields begin to converge, it is a powerful indication the bond market expects lean times ahead.

When the long-term yield falls beneath the short-term yield, the yield curve is said to invert.

And in this sense time itself inverts.

Time trips all over itself, staggered and bewildered by a delirium of conflicting signals.

In the wild confusion future and past collide… run right past one another… and end up switching places.

Thus an inverted yield curve wrecks the market structure of time. It rewards pursuit of the bird at hand greater than two in the future.

That is, something is dreadfully off.

It suggests an economic winter is coming… when investors expect little growth.

And today a closely monitored section of the Treasury yield curve inverted… for the first time since 2007.

The 10-year Treasury yield slipped beneath the 3-month yield.

This inversion is a near-perfect omen of recession — conceded even by the Federal Reserve.

The 3-month and 10-year spread is the Fed’s preferred measure of the Treasury yield curve as it shows the strongest historical correlation between curve inversion and a forthcoming recession.

Sharpening the point to a poignant maximum is analyst “The Fortune Teller”:

“Let me say it loud and clear: The yield curve is telling you that a recession is on its way.”

It is not a warning to be put off or placed behind the clock.

According to Bank of America, an inverted yield curve has preceded recession on seven out of seven occasions over the past 50 years.

An inverted yield curve has also foretold every major stock market calamity for the past 40 years.

As mentioned, the yield curve last inverted in 2007.

When it comes to an inverted yield curve, anyone who ignores its economic message should do so at their own peril.

In graphic detail, the gray bars of recession following a yield curve inversion: 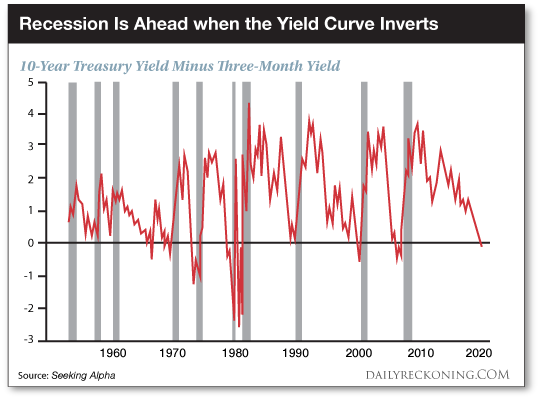 This doomy portent drifts once again into view…

And given the extreme duration of the current recovery and the still-inflated stock market, the thumping could assume historic grandeur.

“We’re going at least for a 40% decline from the S&P’s top,” warns Otavio Costa, macro analyst at Crescat Capital.

But is an inverted yield curve an immediate menace, a stormcloud overhead?

History reveals the dismal effects of an inverted yield curve may not manifest for perhaps 18 months or longer.

Of course recession may fall later — but also earlier. The hour and minute we cannot say.

The gods have denied us the gift of foresight… and the wisdom that attends it.

Unfortunately, the owl of Minerva flies only at dusk…