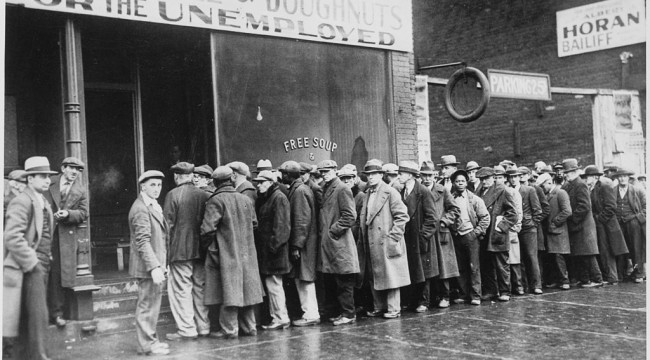 Why the Current Global Depression Looks Nothing Like the 1930s

[Ed. Note: Whether people know it or night, the world is in an economic depression. Today, Jim Rickards explains how that can be the case despite positive growth and declining unemployment, and why this depression looks nothing like the 1930s. Read on…]

Andrew Robertson: As Joe Hockey calls on G20 leaders arriving in Brisbane to focus on growth, at least one leading economist thinks much of the world is in a depression, but we just haven’t noticed yet.

Andrew Robertson: We’ve just had the APEC meeting in China which put out a communique saying there was a strong momentum for growth in the Asia Pacific region; we’ve got the G20 summit in Brisbane this weekend, which will probably say a similar thing… Where do you see that growth coming from?

Jim Rickards: Well it’s a little difficult right now… I mean, there is a lot of potential and some good things did come out of the APEC summit. There’s progress on a couple of free trade areas… there’s a lowering of tariffs on technology between the United States and China…

Some of the good news actually came out of a China-U.S. bilateral — meaning that was sort of following on the APEC summit. So that’s the good news…

The bad news is you look around the world right now… Japan has hit a wall; Europe is probably in recession, technically; the U.S. growth is much weaker than a lot of analysts assume. I know we had a couple good GDP numbers, but one of them was fraudulent (the third quarter GDP). The Commerce Department failed to make a seasonal adjustment in defense spending. So that was sort of a pre-election gimmick.

And then second quarter, I think, was swollen by inventory. So, I expect the U.S. numbers will come in a lot weaker.

Andrew Robertson: Well you talk about a “depression” but I’ve also heard you argue that the symptoms of that depression are being hidden by all the money printing that’s going on at the moment. Can you explain that?

Jim Rickards: Sure, well just on the depression point, a lot of people say, “Well hey, we’ve been in a recovery since 2009.” And economies have been recording growth. But you can have growth in a depression. You can have declining unemployment and rising stock prices in a depression.

What defines a depression is not continuous decline in growth, it’s growth below potential.

By the way… Best John Maynard Keynes definition (I happen to think it’s a good one)… But I didn’t invent that, that’s his definition.

Andrew Robertson: When you use the word “depression” I’m sure people watching this program tonight will be thinking back to the 1930s, and also thinking we’re a long way from that now, aren’t we?

Jim Rickards: I don’t think we are at all.

First all you do have to think back to the 1930s. That’s the last time there was a global depression. So I think the viewers are right to kind of reflect on that. And what I hear a lot when I have this discussion is — they look at these old black and white grainy photographs of the 1930s, and they say, “Where are the soup lines?”

And I tell them the “soup lines” are in Whole Foods or the upscale supermarkets, ’cause at least in the United States when you’re on assistance (food stamps), they give you a debit card and you go into the fancy supermarket you like and just swipe your debit card.

Andrew Robertson: Now, you talk about economic growth, and there’s been endless speculation about Chinese economic growth in recent times, and you seem to be very much a China “bear”… You argue that China’s economic growth at the moment is 4% when the official figure is 7.5%. How do you get to that figure?

Jim Rickards: There is a real growth story in China but it’s not nearly as strong or robust as outsiders believe, and when the credit crisis hits a lot of those chickens will come home to roost.

Andrew Robertson: Well given that Australia’s economy is so heavily leveraged to China you must see some tough times ahead for Australia.

Jim Rickards: Well, I’m very bullish on Australia. You know, I’ve had discussions with government officials down there and a lot of investors and businesspeople.

One of Australia’s problems, of course, is that there was strong demand for the Aussie dollar. It was almost a “safe haven” going back a year ago or so. And the Reserve Bank of Australia, I think, foolishly decided to join the currency wars.

What happens is that the central banks become prey to the export sector and the tourism sector. We saw the same thing in Brazil earlier, and it’s always a blunder.

So RBA started cutting rates to cheapen the Aussie dollar… You didn’t get the growth you wanted all you got was inflation, which is exactly what you would expect. So my recommendation is Australia could issue long-term bonds at very low rates.

If the world wants Aussie dollar assets… give it to them. Give them bonds. But then take the money and put it to good use… Build natural gas pipelines… improved highways…

I recently got back from Australia. I was in Alice and Uluru and drove 700 miles through the outback… Had a wonderful time. It’s a beautiful, beautiful country. But you could use a few new roads out there.

So I think there are smart things Australia could do.

Andrew Robertson: Well there’s a lot of people here that agree with that view. But the end of QE3 in the United States has weighed heavily on the Australian dollar. But it’s the U.S. dollar that you’re concerned about. And you can actually see the end of the greenback as the world’s reserve currency.

Jim Rickards: Well, first of all, a lot of people are trying to get out. It’s easier said than done. It’s one thing to say, “I want to get out of dollar hegemony.” We hear this from Russia and China and the BRICS and elsewhere around the world. But it’s not so easy to do, but they’re all working on it…

China’s piling up thousands of tons of gold. I mean, there are only about 35,000 tons of official gold in the whole world, and China has bought some number — we don’t know exactly what it is… But we can reasonably estimate three or four thousand tons in the last five years. That’s 10% of all the official gold in the world.

Russia has doubled its gold reserves…

So we see concrete steps towards getting rid of the dollar. It won’t happen overnight, but we’re on the way.

I certainly don’t see rate increases next year. The U.S. economy is fundamentally weak. I don’t know how they raise rates in the face of that weakness. They may even go to QE4 late next year, or early 2016. But there comes a time when you print that much money, you undermine confidence.

Andrew Robertson: Well, Jim Rickards, as always you’ve given our viewers a lot to think about. Thank you very much for your time.