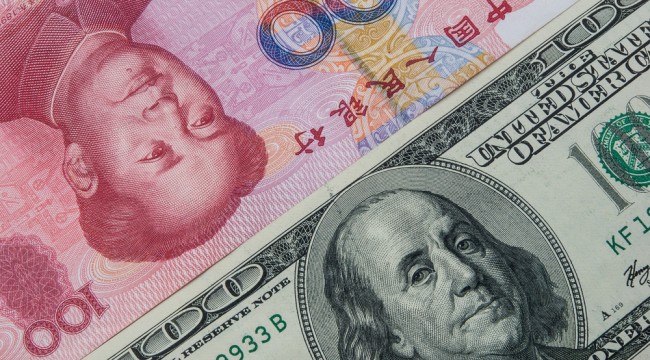 LONDON — Another day, another fall in the Chinese yuan.

One thing I forgot to mention yesterday was that as well as overseeing a devaluation, the People’s Bank of China has changed the way it fixes the exchange rate.

Previously it simply set a daily level, then allowed the currency to fluctuate freely by 2% either side.

From now on it will use a formula that gives weight to the previous day’s closing price. So if the currency ends the day at the bottom of that 2% band, the following day’s exchange rate will be lower.

Remember we looked yesterday at how the IMF has raised questions about the yuan being freely usable? (You can catch up here).

This is China’s way of letting the market have more of a say.

Presumably China hopes this sop to market forces will keep the yuan on the path towards inclusion in the IMF’s special drawing right.

The IMF has issued a statement giving China a B+ for their efforts. A step in the right direction, but could do more is the gist. So it looks like the yuan should still end up in the SDR basket.

Is This Really a Big Deal?

Several analysts and journalists are today downplaying the significance of all this. They point out that two daily moves of less than 2% is nothing compared to the 20% move the Japanese yen has made in the last year.

Fair point. But it assumes that this is a one-off move as the PBOC claims. I see no reason why it should be. The yen, like the euro, has weakened against the dollar recently. Because it was pegged to the dollar, the yuan was dragged higher.

Now the peg has been broken, why should the yuan remain at these elevated levels? Especially given the headwinds China faces.

The yuan is traded more freely offshore than it is in mainland China. And offshore traders are already pricing in further falls.

China was more inclined to let market forces in given those forces were always likely to push the yuan lower – exactly what China wants given its weakening export performance.

The IMF report gave them some cover.

“You want our exchange rate decided by the market?” they said.

“Fine. Now it’s gone down. Don’t you dare call us a currency manipulator.”

Of course, that’s precisely what some US politicians have done.

Some Nonsense About Foxes

Responding to the PBOC’s move, Democratic senator Chuck Schumer, an old hand when it comes to blustering about China’s currency, conjured some lovely rhetoric that makes up in cliché power what it lacks in analytical content:

“Allowing the renminbi [another name for the yuan] to be declared a reserve currency is akin to putting the fox in charge of the henhouse.”

Except, it’s not at all like that, is it?

I’m going to regret this, but let’s try and make that analogy work. Putting the fox in charge of a hen house means trusting an animal to look after some other animals when it in fact very likely to destroy the animals in its care.

If we assume the hens of Schumer’s imagination are the pounds, euros, dollars etc. in the SDR basket, then tell me: which of the major central banks isn’t a fox?
Anyway.

It’s open to debate is whether the yuan is actually “undervalued”.

Firstly, it’s debatable because if you believe that value is determined by markets, the question is largely nonsense anyway.

Leaving that philosophical discussion to one side, there’s another reason claims that the yuan is undervalued look spurious. It’s the US dollar.

The dollar has been on a tear for the last year. Because the yuan is pegged to the dollar, it too has been dragged higher.

This clearly doesn’t help China’s exports. Forget all the talk that China needs to rebalance its economy away from export-led growth. That takes a generation, and it’s difficult. China is slowing now, and the authorities will look to exports to ease the pain.

So we shouldn’t be surprised if there are further yuan devaluations to come.

All Eyes On September 17

The question is, what will America do in response?

The next big event in the US calendar is the Federal Reserve interest rate announcement on September 17. I noted on Monday that the consensus was about evens that the Fed will hike interest rates.

Of course, that was before China made its move. To what extent does that change things?

I have two points to make on that.

Firstly, the PBOC may have decided to get out ahead of any Fed hike.

I’m reminded of the Swiss National Bank’s move back in January. If you recall, the SNB had pegged the Swiss franc to the euro, to prevent the franc getting any higher. The result was the SNB’s balance sheet grew bloated with euros, bought by the SNB to maintain the peg.

When it became clear the European Central Bank was about to start its own quantitative easing programme, the SNB threw in the towel (it would otherwise have had to print who knows how many francs to buy who knows how many euros).

For its part, the PBOC may have done something similar. Break the peg and change the exchange rate-setting mechanism now rather than see the yuan dragged even higher after September 17.

A Weaker Yuan is Deflationary For Everyone Else

So does this mean the Fed actually will hike next month?

Not necessarily. A weaker yuan means an even stronger dollar than before. It makes Chinese imports to the US cheaper. This is deflationary – and deflation is exactly what the Fed is trying to fight.

Raising rates would be even more deflationary. Does Fed chair Janet Yellen think the US economy is strong enough to handle a hike now that China may have begun a new devaluation cycle?

By the way, this isn’t just an intellectual curiosity for us here in Britain. For one thing, the timing of the Bank of England’s first rate rise will likely take into account what the Fed does (or doesn’t do).

Secondly, a currency war between the world’s two largest economies, if that’s what we get, could end up sparking global inflation if it gets out of hand.

Mr Currency Wars himself, Jim Rickards, gives his views on this toStrategic Intelligence members later in the week, and outlines a plan the global elite have to solve the world’s debt problem.

This is a plan that could be devastating for ordinary savers and investors.