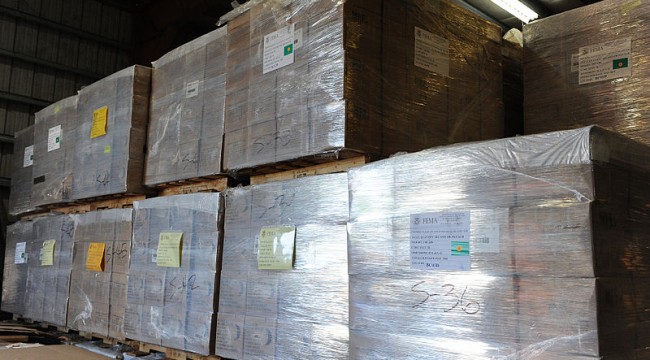 When stagnation grabs exporting nations by the throat, the universal solution offered is devalue your currency to boost exports.

As a currency loses purchasing power relative to the currencies of trading partners, exported goods and services become cheaper to those buying the products with competing currencies.

For example, a few years ago, before Japanese authorities moved to devalue the yen, the U.S. dollar bought 78 yen. 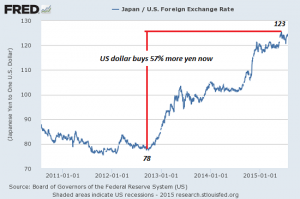 Devaluation is a bonanza for exporters’ bottom lines.

Back in late 2012, when a Japanese corporation sold a product in the U.S. for $1, the company received 78 yen when the sale was reported in yen.

Now the same sale of $1 reaps 123 yen. Same product, same price in dollars, but a 57% increase in revenues when stated in yen.

No wonder depreciation is widely viewed as the magic panacea for stagnant revenues and profits.

There’s just one tiny little problem with devaluation, which we’ll cover in a moment.

One exporter’s depreciation becomes an immediate problem for other exporters: when Japan devalued its currency, the yen, its products became cheaper to those buying Japanese goods with U.S. dollars, Chinese yuan, euros, etc.

That negatively impacts other exporters selling into the same markets–for example, South Korea.

To remain competitive, South Korea would have to devalue its currency, the won.

But as correspondent Mark G. recently observed, devaluation has a negative consequence few mention: the cost of imports skyrockets.

When imports are essential, such as energy and food, the benefits of devaluation (boosting exports) may well be considerably less than the pain caused by rising import costs.

Japan is a case in point. The massive devaluation of the yen was designed to boost Japan’s exports and rocket-launch corporate profits, which was then supposed to drive a virtuous cycle of higher wages and increased employment.

But the benefits of the massive devaluation have been underwhelming.

Some exporters have seen profits soar, helping to push Japan’s stock market to post-1990 highs, but the effect is not universally positive.

Consider the plight of companies that must buy soybeans from the U.S. to make their food products. The cost of their raw materials just increased 50%, as a $1 of soybeans now costs 123 yen rather than 78 yen.

Given that major exporters of goods and services like China and Japan are importers of oil and food, devaluation is a ticking time bomb in terms of the cost of liquid fuels and food.

The looming global recession and over-investment in commodity production–driven by the zero-interest rate policies of the central banks–has created a temporary glut in oil and other commodities.

But as marginal producers are driven into bankruptcy or cut production, supply and demand will realign at some point.

Somewhere not that far down the line, exporting nations that devalued their currency for the crack-cocaine hit of soaring revenues and profits in their home currencies will find the cost of essential imports will skyrocket while the benefits of their devaluation fade in the currency wars they instigated.

Authorities pushing currency devaluation as a cure for their stagnating economies might want to study Frederic Bastiat’s insight into the eventual cost and consequences: “For it almost always happens that when the immediate consequence is favorable, the later consequences are disastrous, and vice versa.”