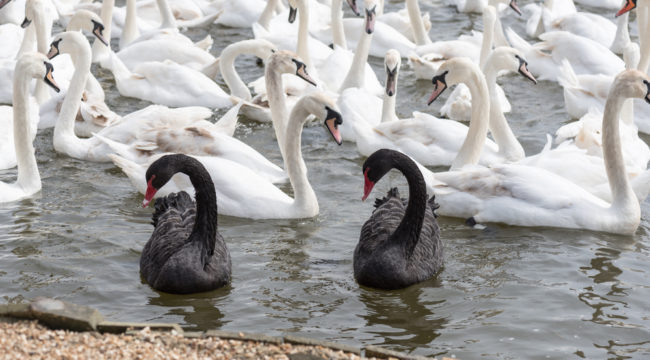 Cryptocurrency: The Blackest of Swans

In his groundbreaking book, The Black Swan, Nassim Nicholas Taleb defines a Black Swan as follows…

“An event, positive or negative, that is deemed improbable yet causes massive consequences.”

With that in mind, is Bitcoin a Black Swan?

I emphatically answer in the affirmative!

Now let’s get even more granular.

Taleb says that all Black Swans have three characteristics…

#1 — “Blacks Swans are outliers, as it lies outside the realm of regular expectations because nothing in the past can convincingly point to its possibility.”

I’d say Bitcoin definitely satisfies this requirement. That is, unless you had gifted insights, and predicted a digital currency would emerge that operates beyond the control of any Central Bank and offers total anonymity.

#3 — “In spite of its outlier status, human nature makes us concoct explanations for its occurrence after the fact, making it explainable and unpredictable.”

Since pundits have tried to rationalize the price of Bitcoin every day since the most recent explosion, put a check next to this box, too. I believe it’s official now…

Bitcoin is the biggest recent example of a Black Swan event, and such events can be infinitely profitable.

The world is clearly changing.

Ten years ago, cryptocurrencies were written off as a nerdy economics projects with no future as “money.”

After growing into a $150 billion market with some 900 currencies actively trading on major exchanges, it’s impossible to ignore them now.

Bitcoin and Ethereum have soaked up much of the press on cryptos as the two most valuable cryptos. And rightfully so, since they racked up gains of more than 300% and 3,000% on the year, respectively.

But here’s another point few people are making:

Rightly or wrongly, crypto is taking its place alongside gold, foreign real estate and other asset classes as a “safe haven” or “crisis hedge.”

The stock market has been on a tear since Donald Trump won the presidential election last year.

And so far, aside from some recent volatility, the S&P 500 has been rocked by a one-day drop of more than 1% just a handful of times in 2017.

But an escalating war of words between President Donald Trump and North Korea has finally struck fear in the hearts of investors. Recently, stocks have posted their heaviest losses since May. And the VIX — known as the stock market’s fear gauge — rose 44% two weeks ago, to 16.29, its highest level of the year.

In each of the recent market “shocks,” it’s true that the price of gold saw an uptick. But here’s the kicker…

It’s known in some circles as “digital gold.” And its recent performance against regular gold may shock you.

For example, as angst over North Korea soars, the traditional safe haven of gold barely budged, rising about 3%.

Meanwhile, Bitcoin rallied 26%. And it’s up over 40% so far in August. But Bitcoin’s superior performance precedes the recent volatility over North Korea.

How did gold fare in the face of the stock pressure? A mere 2.5% gain — less than one-tenth of Bitcoin’s surge.

Of course, Bitcoin hasn’t undergone a true “safe haven” test against a stock market correction (a drop of 10% or more) or even a bear market. And there’s no question that the cryptocurrency is more volatile than gold.

Once again, cryptocurrencies are more volatile than gold. And it doesn’t have thousands of years of history behind it. If you can’t tolerate some volatility, then cryptocurrencies probably aren’t for you. On the other hand, gold can’t come close to approaching their upside.

I’m not trying to disparage gold. For safety against stock shocks, buying gold is certainly not a terrible idea. Gold has a long history as a safe haven for investors. When stocks get hammered in a crash, gold generally rises or at least trades flat.

And though investors can now buy inflation-protected Treasuries here in the United States, gold is also frequently used as a hedge against inflation.

But if you’re hunting for a defensive hedge or safe haven, I believe there’s a superior option available to you.

And if the uptrend in price during stock market dips holds up, Bitcoin is making a strong case for inclusion as a safe-haven asset. One that, used as a hedge against stocks, could line your pocket with far greater profits than gold.

Clearly, investors are voting with their capital that they view cryptocurrencies as a new hedge against uncertainty.

It makes sense that Bitcoin is attracting the most of the money flows, too. That is, since it’s been around the longest.

But it’s only a matter of time before the same investors start pouring money into lesser-known, superior but undervalued cryptocurrencies. In other words, a rising tide will lift all boats. Indeed, it’s already happening…

Some of my three favorite cryptos are currently outpacing Bitcoin and gold. I expect other lesser-known cryptos to start outperforming imminently, too.

So don’t let mainstream scaremongering keep you from taking a decisive step to secure your financial future — maybe the most decisive step you can take this year, or even this decade.