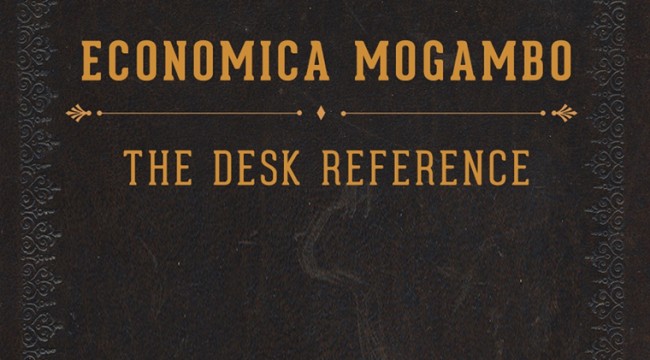 The Book that Beat the Fed

Snug and safe inside the silent and comforting Mogambo Big Boy Bunker (MBBB), I have a lot of spare time each day to work myself into a state of paranoid hysteria by thinking about the economic mess we are in.

Being a cynic of the first order (everything is corrupt and nothing can be done) and sensing imminent doom (We’re Freaking Doomed (WFD)!), it is not surprising to me that the evil Federal Reserve owns more than $3.5 trillion in Treasury debt, which is about 21 percent of ALL the nation’s $17 trillion debt.

As totally bizarre and horrifying as this “monetizing the debt” crap is, the damage has already been done.

Namely, the damage caused by all the newly created currency and credit, used to buy all the Treasury debt in the first place, has already long since flooded into the economy via government borrowing and spending the new money, inflating the money supply and causing horrifying inflation in prices.

Ergo, the national craze to increase the minimum wage.

Nevertheless, one cannot help but notice the way my handsomely rugged face is suddenly contorted into a fit of rage, or the way my manly biceps and bulging forearms flex in anger, or the way the blood vessels are popping in my brawny, muscular neck, or the way I am shamelessly lying through my teeth about all three of these things, to know that this is something important.

2,500 years of Earth history has shown that buying gold and silver bullion at a time like this is the only — only! — winning move.

And it is! The sheer existence of the debt on the books of the Federal Reserve is just the crucial “paper trail” of the treasonous crime of “monetizing the debt,” a sorry scheme which has — all the way through history! — shown to be not only ultimately catastrophic, but also, given the fact that this fact is well known, in fact, to everybody for more than a century, Completely Freaking Stupid (CFS). CFS!

So this evidence will come in real handy as glaring Exhibit A when the whole enchilada of the corrupt American government-centric economy, financed by a ridiculous Federal Reserve rapidly expanding a fiat currency, using outrageous degrees of fractional banking, falls completely apart in a blizzard of price increases impacting the things you need to live, like food, water and energy, but also terrifying price decreases in things you don’t, like stocks, bonds, vacation houses, retirement plans and labor.

Whereupon I, the brave and heroic Mogambo The Outraged (MTO), will be thrilled to be called to the witness stand, frantically elbowing my way through the frenzied, maddened crowds thirsting for blood and seeking revenge on the people who caused their misery, to happily and loudly testify against the monstrous Ben Bernanke, on trial for his treachery for this monetizing the debt thing, and verily will I thunder at him!

But I will thunder mostly at the horrid, satanic butthead Alan Greenspan, who is solely responsible for our economic mess, and I will thunder long and loud at him as The Great Monetary Satan (TGMS), over the repeated objections of the defense attorney, the judge, and even Randy, the avuncular bailiff, who will be struggling to drag me, kicking and screaming, off of the witness stand to stop me from bellowing ever-louder about the demonic Alan Greenspan (“Off with his head! Off with his head!”), the judge repeatedly banging his gavel, bang, bang, bang, and sternly saying, “Order! Order in the court!” Bang, bang, bang! Wow! What a scene!

But, as you are probably aware, that is then. This is now. Fortunately, the People Of The World (POTW) can already find this kind of evidentiary loudmouthed firebrand condemnation of the horrid Alan Greenspan and Ben Bernanke in that fine and fabulous book of Cosmically Timeless Mogambo Monetary And Investment Wisdom (CTMMAIW), the Economica Mogambo, available at Amazon.com, which makes a fine present to anyone who has ever wondered aloud about a general unease, a feeling of being freaking doomed, and who might want to know that he or she was right: We ARE freaking doomed!

And it is a wonderful book to find out who is responsible, but who cannot wait for the trials of Greenspan and Bernanke to officially find out: The wonderful book, Economica Mogambo, tells them who, how and why, and (best of all!) what to do about this catastrophe to capitalize on it.

To wit: The lesson of the last few thousands of years of government and money is to buy gold and silver when the government is acting suicidal and stupid, such as the current fad of allowing massive deficit-spending of newly-created fiat currency and credit.

The problem is debt. Chris Martensen, writing at Mises.org, notes that Total Credit Market Debt is now about $57 trillion. And what is the Total Credit Market Debt? He graciously defines it as “Total Credit Market Debt (TCMD) is a measure of all the various forms of debt in the U.S. That includes corporate, state, federal, and household borrowing. So student loans are in there, as are auto loans, mortgages, and municipal and federal debt. It’s pretty much everything debt-related. What it does not include, though, are any unfunded obligations, entitlements, or other types of liabilities. So the Social Security shortfalls are not in there, nor are the underfunded pensions at the state or corporate levels. TCMD is just debt, plain and simple.”

What he does NOT say is that total GDP is about $15 trillion, which means that collectively we owe almost four times as much as we make, in A Whole Freaking Year (WFY), as a whole freaking country! Unbelievable!

The problem is demonstrated by example. If you make $100 a year and you owe $100 at 5 percent interest, your interest payment is 5 percent of your income. Simple.

Now, if your income (GDP) is $15 trillion and you owe $57 trillion at 5 percent interest, your interest payments alone consume almost 20 percent of your income. And what will happen when interest rates zoom because of all the inflation in prices caused by all of this creation of new currency and credit by the evil Federal Reserve? Yikes!

This, in case you are following my drift here, is Beyond Freaking Insane (BFI).

Luckily, we know what to do: 2,500 years of Earth history has shown that buying gold and silver bullion at a time like this is the only — only! — winning move. All others are losers. All!

And that is why I say, without fear of contradiction except from those stupid Earthling people who have not read their own economic history, and those who, as yet, refuse to recognize my Cosmic Mogambo Genius (CMG), even though Economica Mogambo is right there for sale at Amazon, and who still scoff (“Screw you, ya moron!”) at my helpful suggestion that they call me “Master” and grovel at my feet in whimpering supplication, “Whee! This investing stuff is easy!”

Ed. Note: For years, the Mogambo offered his timeless monetary and investment wisdom exclusively in The Daily Reckoning. And though his appearances have become less frequent, he has returned to The Daily Reckoning in full force, offering up his unique brand of commentary on everything from US debt to intergalactic politics. Don’t miss another Great Mogambo Missive (GMM). Sign up for The Daily Reckoning, for FREE, right here.