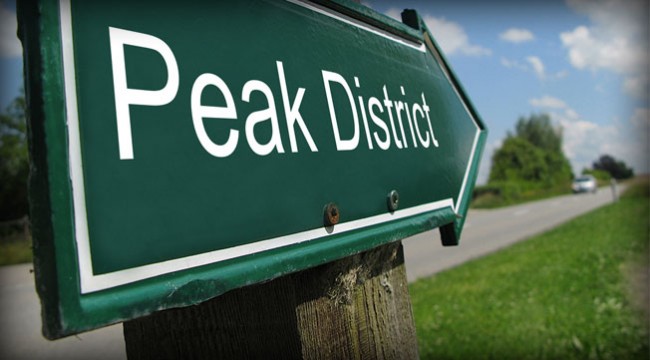 Will investors perpetually bid up an earnings stream that has peaked and may be on the verge of shrinking? We’re about to find out…

With first-quarter earnings season under way, expectations for earnings have rarely been higher. But there are many signs that corporate profits have peaked, including a surge in negative guidance from company management.

Disappointment and lower stock prices are likely; it makes no sense for investors to pay ever higher prices for a shrinking earnings stream.

FactSet’s “negative corporate guidance ratio” is calculated as the number of S&P 500 companies issuing negative guidance divided by the number issuing positive guidance. The higher the ratio, the further investors’ expectations are from sober reality. So it makes sense for the ratio to peak as the market peaks and to bottom as the market bottoms.

This chart from Morgan Stanley illustrates: 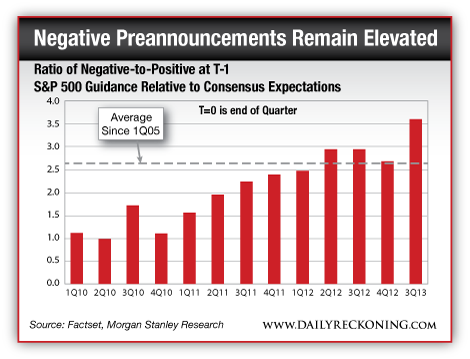 Morgan Stanley strategist Adam Parker explains: “Companies have been guiding the Street lower and managing expectations for earnings. The ratio of negative-to-positive guidance is now at all-time highs. For every one instance of positive guidance we have seen more than three instances of negative guidance versus consensus.”

In other words, market expectations for 2013 earnings are way above those of company executives — executives with the best ground-level information.

Here’s the bottom line for 2013 earnings: Corporations have spent the past few years getting as lean as possible, including cutting excess labor, refinancing debt at lower rates and using technology to boost productivity. These factors can’t perpetually sustain corporate profit margins.

“On the earnings front, my concern continues to be that investors don’t seem to recognize that profit margins are more than 70% above their historical norms, nor the extent to which this surplus is the direct result of a historic (and unsustainable) deficit in the sum of government and household savings. As a result, investors seem oblivious to the likelihood of earnings disappointments not only in coming quarters, but in the next several years. We continue to expect this disappointment to amount to a contraction in earnings over the next four years at a rate of roughly 12% annually.”

If earnings contract by 12% per year over four years — a total contraction of 40% — the S&P 500 could easily fall 50%. A global economic slowdown (combined with stubbornly high operating costs) could push profits down by 40%.

What factor could take investors by surprise, depressing corporate profits? Inflation could easily surprise on the upside, and shortages of skilled labor should become more common (thanks to the financial incentives for long-term unemployment). Higher wages may boost revenues, but at companies with weak pricing power, costs could rise even faster, resulting in lower margins.

Perhaps the time has come to expect an “unexpected” drop in corporate profits.