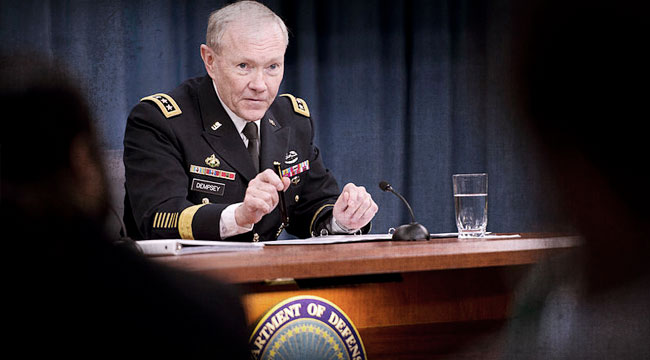 It takes time and space to turn big ships out at sea. It’s the same with national defense policy, certainly with “investable angles” of policy.

What happens today? Tomorrow? Next week or next month? In some respects, not a whole lot, I suspect. But in other respects, we could see all hell break loose during the upcoming “lame duck” session of Congress.

Short term, in the next six weeks or so, we’ll see a lame duck Congress, certainly a lame duck, Democrat-controlled Senate. What will happen, say, if Attorney General Eric Holder walks out the door, and Obama moves to rush through and confirm some left-wing, faculty lounge crackpot as the replacement? I can’t wait to find out!

Or what about the long-threatened presidential “amnesty” for illegal immigrants in the U.S.? How much poison will that pour into the political well? Wait and see.

Politics or no, however, there are any number of “must pass” legislative items left over from the past year. The “old” Congress simply has to return to Washington, do some work and pass some bills.

First and foremost, there’s $550 billion in play within the yet-unpassed Department of Defense (DOD) appropriations bill, which means the M-O-N-E-Y. That is, we’re looking at pretty much the whole DOD budget for the rest of fiscal 2015. No bill, and we “shut down” the Pentagon, ground the airplanes, tie up the ships and send the troops home. Of course, that can’t happen, so Congress will have to do something.

Nearly $60 billion of that $550 billion is for Overseas Contingency Operations — Afghanistan, Iraq, African efforts and much more. No pressure, though, because current funding expires on December 11. Oh wait… December 11? Whoops.

Also expiring on December 11 is the specific legal authorization for the Pentagon’s program to train and equip certain Syrian rebels. Thus, expect December 11 to be a VERY hard deadline for some sort of appropriations activity. We will see… something!

What else will we see? Consider that most Congresspeople spent the fall campaigning, not legislating. This has pushed other “must-pass” legislation into the lame duck session, too. There’s not much time to do anything, one way or the other; thus, expect Congress to fold annual DOD spending into one big, trillion-dollar omnibus bill to fund the government for the remainder of the fiscal year. That always works so well, right?

Still, any port in a storm. The hard process of deliberating and governing will be a mere Kabuki theater for the next two months. The lame ducks will pass a hurry-up bill, Obama will sign it, we’ll all sing Auld Lang Syne and then see a new Congress in January 2015.

As Ronald Reagan used to say, “people are policy.” Come January, Republicans will take over the Senate, and add strength in numbers in the House. Red will become redder.

Expect to see significant changes in committee membership, as well as personnel turnover in many key committees that oversee defense and defense-related items. (On this last point, for example, much of the nuclear weapons complex falls under jurisdiction of the Department of Energy.) We’ll see new people making policy, from the political podiums to back office staffers.

Expect Sen. John McCain (R-AZ) to take over the Senate Armed Services Committee (SASC). He’s definitely more of a “hawk” than many others, and I suspect will tend to push for more robust, decisive military responses to any number of current security issues that confront the U.S. — think about Russia, China, Middle East and more.

The implication of Sen. McCain at SASC is that the services will pick up more tasking, and then come back to Capitol Hill, asking for more money to buy more equipment, and stand up more personnel to use it.

For example, Sen. McCain has recently opined that the Obama administration was too quick to withdraw from Iraq, leading to the rise of the Islamic State. It’s an error that McCain argues must not be repeated with the war in Afghanistan, which will formally end on December 31. Expect fireworks all along the waterfront with this.

Over at Pentagon, DOD Comptroller Michael McCord recently stated that he doesn’t expect much in the way of short-term budgetary change, “no matter what happens” with the Senate. Per McCord, “I don’t think many people at the senior levels of DOD expect that we’re going to have instant enlightenment.” (Snarky crack, when you think about it.)

Perhaps, however, someone at DOD “senior levels” should have a chat with Chief of Naval Operations (CNO) ADM Jonathan Greenert.

In a recent visit to Pittsburgh (well, he visited his home town of Butler, which is just north of Pittsburgh), CNO Greenert told a public audience that Navy readiness is suffering, and won’t recover from “second-order effects” of the 2013 budget sequester for another year. In other words, the 2013 budget didn’t include enough funding to fix enough ships, and now the Navy has growing maintenance backlogs.

To make up the difference, the Navy is keeping people and equipment out at sea longer. The old six-month deployments are now nine-month deployments. It does wonders for morale, maintenance, eventual retention and life cycle costs. It’s a variation on the old line about “pay me now or pay me later.” The wolf is at the door, so to speak.

Also, according to CNO Greenert , “I worry about the shipbuilding industrial base.” And well he should, considering that, with the looming closure of the shipyard at Avondale, LA, the country will move to five major shipyards (plus a couple of smaller, mid-tier yards that can do Navy work).

the Navy’s shipbuilding budget will have to increase, just to pay for the… Ohio-replacement ballistic missile program.

Still, in essence, if continued “sequestration” of funds chokes the Navy shipbuilding account, per CNO the fleet will shrink over time. Ships ought to last for decades, to be sure, but building fewer ships in the next few years will certainly come back to bite the Navy and national readiness in a generation.

One piece of good news, unrelated to the election but very “political” in a budget sense, is lower oil prices. DOD is the world’s largest single user of petroleum products. If oil prices stay in the $80 range for an extended period of time, that’s a 20% saving for many energy costs. It’ll be possible for the new Congress to re-program some funds to other needs… and my hunch is that we’ll see more procurement for ships, aircraft, electronics and ordnance.