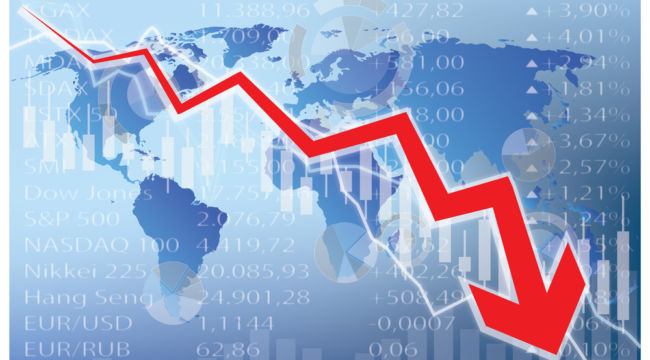 At some point, systems flip from being complicated, which is a challenge to manage, to being complex. Complexity is more than a challenge because it opens the door to all kinds of unexpected crashes and events.

Their behavior cannot be reduced to their component parts. It’s as if they take on a life of their own.

Complexity theory has four main pillars. The first is the diversity of actors. You’ve got to account for all of the actors in the marketplace. When you consider the size of global markets, that number is obviously vast.

The second pillar is interconnectedness. Today’s world is massively interconnected through the internet, through social media and other forms of communications technology.

The third pillar of complexity theory is interaction. Markets interact on a massive scale. Trillions of dollars of financial transactions occur every single day.

If you look out the window and see people bundled up in heavy jackets, for example, you’re probably not going to go out in a T-shirt. Applied to capital markets, adaptive behavior is sometimes called herding.

Assume you have a room with 100 people. If two people suddenly sprinted out of the room, most of the others probably wouldn’t make much of it. But if half the people in the room suddenly ran outside, the other half will probably do the same thing.

They might not know why the first 50 people left, but the second half will just assume something major has happened. That could be a fire or a bomb threat or something along these lines.

The key is to determine the tipping point that compels people to act. Two people fleeing isn’t enough. 50 certainly is. But, maybe 20 people leaving could trigger the panic. Or maybe the number is 30, or 40. You just can’t be sure. But the point is, 20 people out of 100 could trigger a chain reaction.

And that’s how easily a total collapse of the capital markets can be triggered.

Understanding the four main pillars of complexity gives you a window into the inner workings of markets in a way the Fed’s antiquated equilibrium models can’t. They let you see the world with better eyes.

People assume that if you had perfect knowledge of the economy, which nobody does, that you could conceivably plan an economy. You’d have all the information you needed to determine what should be produced and in what number.

But complexity theory says that even if you had that perfect knowledge, you still couldn’t predict financial and economic events. They can come seemingly out of nowhere.

For example, it was bright and sunny one day out in the eastern Atlantic in 2005. Then it suddenly got cloudy. The winds began to pick up. Then a hurricane formed. That hurricane went on to wipe out New Orleans a short time later.

I’m talking about Hurricane Katrina. You never could have predicted New Orleans would be struck on that bright sunny day. You could look back and track it afterwards. It would seem rational in hindsight. But on that sunny day in the eastern Atlantic, there was simply no way of predicting that New Orleans was going to be devastated.

Any number of variables could have diverted the storm at some point along the way. And they cannot be known in advance, no matter how much information you have initially.

Another example is the Fukushima nuclear incident in Japan a few years back. You had a number of complex systems coming together at once to produce a disaster.

An underwater earthquake triggered a tsunami that just happened to wash up on a nuclear power plant. Each one of these are highly complex systems — plate tectonics, hydrodynamics and the nuclear plant itself.

There was no way traditional models could have predicted when or where the tectonic plates were going to slip. Therefore, they couldn’t tell you where the tsunami was heading.

And the same applies to financial panics. They seem to come out of nowhere. Traditional forecasting models have no way of detecting them. But complexity theory allows for them.

I make the point that a snowflake can cause an avalanche. But of course not every snowflake does. Most snowflakes fall harmlessly, except that they make the ultimate avalanche worse because they’re building up the snowpack. And when one of them hits the wrong way, it could spin out of control.

The way to think about it is that the triggering snowflake might not look much different from the harmless snowflake that preceded it. It’s just that it hit the system at the wrong time, at the wrong place.

Only the exact time and the specific snowflake that starts the avalanche remain to be seen. This kind of systemic analysis is the primary tool I use to keep investors ahead of the catastrophe curve.

The system is getting more and more unstable, and it might not take that much to trigger the avalanche.

To switch metaphors, it’s like the straw that breaks the camel’s back. You can’t tell in advance which straw will trigger the collapse. It only becomes obvious afterwards. But that doesn’t mean you can’t have a good idea when the threat can no longer be ignored.

Let’s say I’ve got a 35-pound block of enriched uranium sitting in front of me that’s shaped like a big cube. That’s a complex system. There’s a lot going on behind the scenes. At the subatomic level, neutrons are firing off. But it’s not dangerous. You’d actually have to eat it to get sick.

But, now, I take the same 35 pounds, I shape part of it into a sphere, I take the rest of it and shape it into a bat. I put it in the tube, and I fire it together with high explosives, I kill 300,000 people. I just engineered an atomic bomb. It’s the same uranium, but under different conditions.

The point is, the same basic conditions arrayed in a different way, what physicists call self-organized criticality, can go critical, blow up, and destroy the world or destroy the financial system.

That dynamic, which is the way the world works, is not understood by central bankers. They don’t understand complexity theory. They do not see the critical state dynamics going on behind the scenes because they’re using obsolete equilibrium models.

In complexity theory and complex dynamics, you can go into the critical state. What look like unconnected distant events are actually indications and warnings of something much more dangerous to come.

So what happens when complex dynamic systems crash into each other? We’re seeing that right now.

Financial professionals will use the word “contagion” to describe a financial panic. But that’s not just a metaphor. The same complexity that applies to disease epidemics also apply to financial markets. They follow the same principles.

And they’ve come together to create a panic that traditional modeling could not foresee.

The time scale of global financial contagion is not necessarily limited to days or weeks. These panics can play out over months and years. So could the effects of the coronavirus.

Just don’t expect the Fed to warn you.