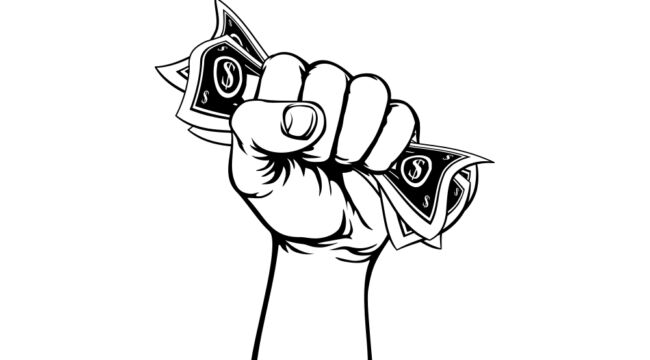 Communism for the Rich

My critics sometimes accuse me of being a communist, of all things.

I must say, the irony of being accused of being a communist by many of these people is incredibly rich.

That’s because the policies I advocate in my writings are far, far more “free market” than any of theirs.

I find my critics hide behind the slogan of free market capitalism, while practicing something entirely different — crony capitalism.

What does it mean to be a crony capitalist?

It means you don’t rely upon the free and competitive market to earn your profits. You depend instead upon government support in one form or another.

Big Pharma and Big Defense are probably the most prominent examples of crony capitalism most people are familiar with. And just look at their profits over the past couple of years.

How would they make out on the free and fair market without working hand-in-glove with government?

Meanwhile, the policies I advocate depend upon free people making free decisions. Mankind’s history shows that this is the way to a better tomorrow.

My Critics Doth Protest Too Much

But when I point out that “free market capitalism” in America is neither a real market nor real capitalism, those who equate any criticism of “capitalism” as proof of communist leanings are triggered.

The irony is that I’ve spent 17 years tirelessly critiquing centralized wealth and power — the acme of communism — as the source of our moral, social and economic decay.

Another irony is that communism is absolutely thriving in America in broad daylight: The monopolies, quasi-monopolies and cartels that dominate the American economy and governance are Communism for the Rich.

The core goals and functions of communism and monopolies/cartels are identical: Snuff out unfettered markets (competition, transparent price information for all participants, etc.) and take control of all market functions…

Restricting supply and controlling all regulation with the sole goals of further concentrating centralized power and maximizing steady profits (i.e. maximum greed) to benefit those who own/control the concentrated wealth and power.

And of course both pump out an endless spew of propaganda about the wonderfulness of the system that benefits the few at the expense of the many.

This centralized power to benefit the few at the expense of the many characterizes both communism and monopolies/cartels. There is no difference between the two other than the structures of control that eliminate competitors, regulate supply and keep prices high enough to further enrich the already-rich.

Those operating monopolies and cartels in America are in effect a private-public Politburo, a concentration of wealth that buys whatever political power is needed to increase profits and protect the monopoly from threats.

What’s unfettered in America is Communism for the Rich and the normalization of corruption that results from the auctioning of political power to protect monopolies and cartels. “Markets” and “capitalism” only exist on the fringes of the economy.

But the myth that America is the home of “unfettered capitalism” is extremely useful cover for the actual system, which is Communism for the Rich.

And you can’t really talk about Communism for the Rich without addressing the key role central banks like the Fed play. They help make it possible, but they’d like you to think it’s “just the normal way things work.”

Despite the lofty claims made by our rational mind, we want to hear and obey the voices of the gods. This non-rational desire is the root of cults and episodes of mass hysteria, i.e., the madness of crowds.

Humanity is in the grip of the secular cult of central banking. The cult’s seers and prophets periodically emerge with arcane signs and readings, offering divinations to guide the followers.

The motivation to believe the cult is the natural order of things is powerful: greed. Those who heed the oracles of the cult enrich themselves, unbelievers impoverish themselves.

Rationalists outside the cult discern the structure of the cult and its core beliefs. The cult creates credit and “money” out of thin air and distributes it to the few extremely wealthy to further expand their wealth.

These few do not improve productivity or the well-being of the many; they use the cult’s gifts to exploit the cult’s rigged casino of speculation to maximize their private gains.

In other words, the cult benefits the few at the expense of the many — Communism for the Rich — while proclaiming it benefits everyone. This is of course insane. The cult’s core beliefs are:

1) enriching the already-rich magically trickles down benefits to the masses, and 2) this vast enrichment of the already-wealthy is cost-free. The economy prospers with no downside or consequences other than the glorious expansion of wealth at the top and the trickle-down of sweet goodness to the masses.

This is of course insane. The costs are borne by the masses and by the socioeconomic system, which is now in thrall to a cult that has made the economy dependent on an ever-expanding credit bubble that feeds an ever-expanding asset bubble, which then enables a further expansion of credit, which then fuels ever-higher assets prices.

And so on, forever, because the cult and its ever-expanding bubble are the natural order of things. If we don’t sacrifice the many to benefit the few, the sun will stop rising and the Earth will be cast into endless shadow.

This is of course insane, but greed is a powerful motivation to be an ardent believer in the central banking cult. Expanding credit based on the expanding collateral of asset bubbles, each feeding the other, is held up not as insane but as a financial perpetual-motion machine, overseen and managed by the seers and prophets of the central bank cult.

Alas, cults and bubbles both come to an inglorious end. What seemed self-evidently true for the ages is revealed as a brief moment of self-serving delusion, supported by the immense powers of greed and the madness of crowds.

Do you hear the voices of the gods? Yes, yes, oh yes.