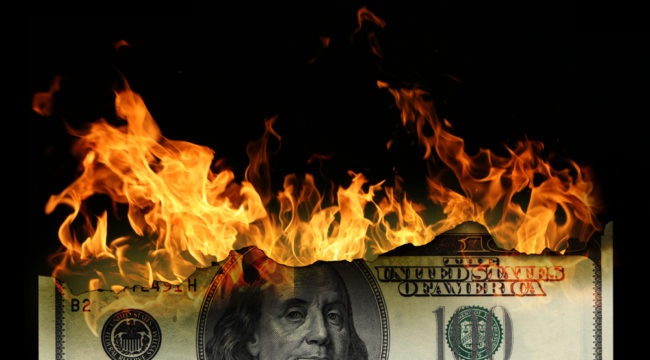 Wages are rising… and wage-driven inflation is on the jump.

Retail sales are roaring. So is consumer confidence.

Corporate profits are ringing the registers.

And because of tax cuts, more money will soon jingle in consumer pockets.

In this rosy-dawn view interest rates are rising because economic conditions justify them.

Too much growth could overheat the economic engine… and the Fed is under bonds to run the equipment at safe speeds.

While this pleasing melody soothes investors, Bank of America analysts run their nails over a chalkboard:

We, on the other hand, are a lot more worried that global growth might be peaking… and that a highly indebted world is too fragile to be challenged by central bank balance sheet contraction in 2019… We are getting more concerned about a global policy error, of too much expected monetary tightening in the U.S….

It has also embarked upon quantitative tightening.

At current rates the Fed is expected to lighten its balance sheet $420 billion this year.

That is, some $1.6 trillion of market-supporting liquidity is scheduled to come off duty.

Our old friend Richard Duncan has fashioned a market-tracking device he calls the Liquidity Gauge.

Its logic is simple…

When liquidity is positive, stocks tend to rise.

When liquidity is negative, stocks tend to fall.

Recall, the Fed has been withdrawing liquidity.

But now comes the objection:

If liquidity was negative, explain the records.

Ah, but the Federal Reserve is not the only source of liquidity.

The European Central Bank (ECB), for example, was hosing 60–80 billion euros a month into the markets last year.

Also to consider are the contributions of such grandees as the Bank of Japan (BOJ).

As the folks at Yardeni Research note:

During January, the sum of the assets held by the Fed, ECB and BOJ rose to a new record high of $14.6 trillion, led by the ECB.

Note the parallel track of the S&P: 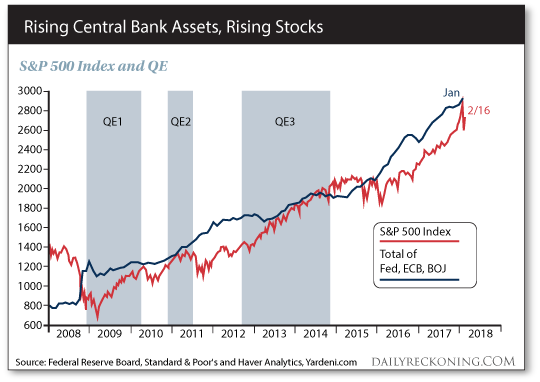 But what about the rest of this year?

The so-called Liquidity Gauge is set to swing to a Sahara-like negative $904 billion — the largest liquidity drain on record.

But a question follows:

Why the negative $904 billion?

The combination of tax cuts and ballooning government spending over the next few years leads straight to $1 trillion-plus deficits.

The government must sell massive amounts of bonds to finance these deficits… which siphons money from the financial machine.

Add these sky-shooting deficits to quantitative tightening and a negative $904 billion picture emerges.

But the projected drought worsens… 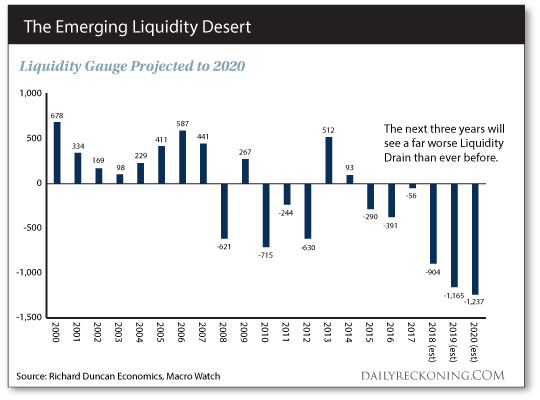 That amounts to a cumulative liquidity drain of $3.3 trillion over the next three years, far worse than anything the United States financial markets have ever endured before.

But what about the ECB? Might they offset the flow?

It may strike zero this September — if they make good on current plans.

The Bank of Japan may keep the business going yet. But not enough to offset the outflows (see below for more on Japan).

But can the economy — can the markets — withstand a massively receding liquidity tide?

To ask the question… seems almost to answer it.

Of course, the Fed is under no mandate to continue quantitative tightening, or raising interest rates.

If the stock market goes to pieces, if the economy drops into recession, we are confident the Fed will re-open the sluice gates.

It will keep them open as wide and as long as necessary.

And we will likely hear no more talk of returning its gargantuan $4.4 trillion balance sheet to “normal.”

Markets will simply not allow it.

So rather than a great liquidity drain, we may face another reality, equally disconcerting in its way: