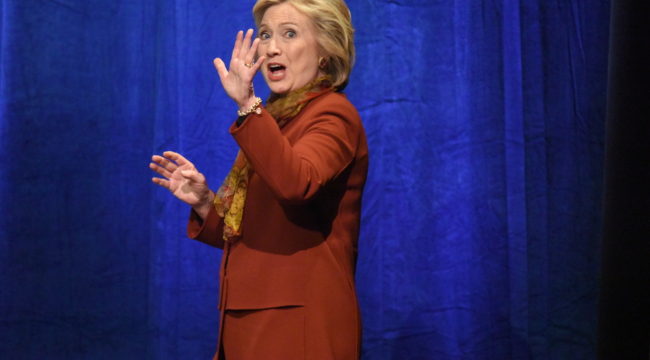 With Friday’s bombshell, the Wall Street/Washington elites are now shocked and desperate, they will pull out every stop imaginable to arrest Trump’s unexpected revival down the stretch. And they are more likely than not to succeed because this bombshell will function to suppress Hillary’s vote, not materially boost Trump’s.

The fact remains that the two most unpopular candidates of our lifetime are locked in a game of subtraction on the popular vote.

Trump has been locked-in the low 40s in the four-way race, which is what’s actually on the ballot in most states, and even with this stick-save from the political gods he has simply alienated too many voting blocks — including women, Hispanics and the proverbial college-educated — to surge like Reagan did in the last two weeks of the 1980 race.

At the same time, I’ve been contending that Hillary will be hard-pressed to move much above 45%, and this latest corruption eruption almost certainly seals the case.

So this election carnival reverts to trench warfare in a handful of counties in a handful of battleground states — and among undecided voters therein who have most definitely not been chanting “lock her up.” The really fervent anti-Hillary voters who will feast on this latest disclosure are based in the heartland of Flyover America, and those states should end-up glowing bright red!

That is to say, until Friday afternoon, Trump was fighting a rearguard battle to hold onto Mitt Romney’s 206 electoral votes from 2012. His campaign was bailing water from a boat that already had a 126 vote deficit.

Perhaps now the Romney red states have been stabilized and put away. And perhaps now it is conceivable that the two battleground enchiladas — Florida and Ohio — can swing into Trump’s column, as well.

But that adds up to just 253 electoral votes and no cigar for the Donald.

Moreover, beyond that steep leap you are talking about rain, ground games and the idiosyncrasies of swing precincts in the 2012 blue states of Iowa, Nevada and Maine’s conservative CD2 congressional district (which casts it electoral vote separately from the statewide winner).

Still, if Trumpian lightning does strike on November 8th in those three jurisdictions, it adds just 13 votes and brings the total to 266 electoral votes. And that assumes the neocon whack-job Evan McMullin running as an independent in Utah doesn’t throw that red state’s six votes to Hillary or end-up making himself kingmaker in the U.S. House of Representatives.

To be clear, my purpose here is not election prognostication. But I do think that for Trump to win the White House all of the foregoing would have to happen — plus there will have to be a thundering act of God on election day in either New Mexico or Pennsylvania to put him over the top.

Yet we doubt even God can orchestrate a deluge of rain during the month of November in New Mexico. That means Philadelphia would have to be hit by the biggest storm since Katrina visited New Orleans — so that Trump could wrestle down the state’s 20 electoral votes from the coal country, rest belt counties and rural backwaters of Pennsylvania.

Then again, miracles do happen, and it now seems as if November 8th is guaranteed to produce one — even if not the type that the newly-minted churchgoers holed up in Trump Tower are praying for. 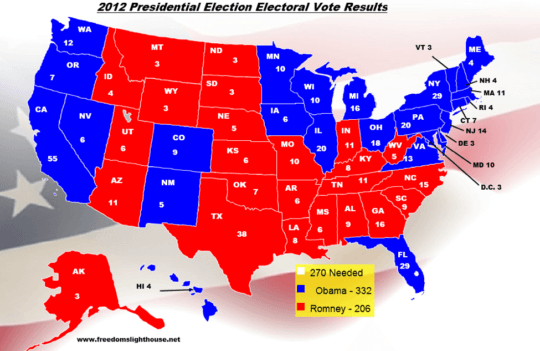 What I am suggesting is that this Mother of all October Surprises may well insure that the 2016 election results end up fracturing the nation’s politics like nothing since 1860. And that, unfortunately, is the only route to liberation from the destructive rule of the Wall Street/Washington elites.

Folks, the ruling elites will never accept the fluke case of a Trump victory based on a minority of the popular vote and a hairline win in the electoral college — even if lightning strikes and God opens the heavens above Philadelphia on election day. The mainstream media will be out to do to his Presidency from day one what it did — and far more legitimately — to Nixon’s at the end.

At the same time, in the now suddenly far more plausible case that Hillary wins with just +/- 45% of the popular vote and a sparse margin in the electoral college — an equal and opposite political upheaval will follow closely thereupon.

For starters, Donald Trump will likely finish the job that he was slated for by the fates of history in the first place. That is, to be a modern-day Sampson empowered to pull down the corrupt regime of casino capitalism on Wall Street and the reign of endless wars, public debt, unchained entitlements and K-street racketeering in Imperial Washington.

Trump may well turn a close election into a bitterly contested and prolonged crisis of governance by demanding recounts, prosecuting the “rigged” election meme to a fare-thee-well and fulfilling his second debate pledge to withhold a concession to Hillary in the event he loses.

If that transpires, as now seems increasingly probable, it will make the 2000 election “hanging chad” episode look like a Sunday School picnic. Hillary Clinton would enter the White House more bruised, battered, bloodied and de-legitimized than any President-elect in U.S. history. Even John Quincy Adams in 1824 represented a clan that was in far better repute than the Clintons.

More crucially, FBI Director James Comey’s action Friday dramatically increased the odds that even if Hillary Clinton stumbles past the post first, the 2016 election is likely to be re-litigated in another forum.  That is, in endless and ferociously partisan “investigations” by a swarm of House committee armed with the subpoena power.

And on that score, the 24,000 WikiLeaks production of John Podesta’s emails tell you everything you need to know. Namely, these people left compromising fingerprints and inadvertent confessions everywhere. The smoking guns which will bring down the incorrigible corruption and arrogant lawlessness of the House of Clinton — including the vast shakedowns of the Clinton Foundation and the Billary pay-to-play global racketeering schemes — are as certain to materialize as the secret Nixon tapes of 1973.

That all adds up to a GOP House of Representatives — which is now certain to be returned to office in close to its current numbers — looking for a reprise of the Clinton Impeachment Games of 1998. Indeed, in response to the Friday bombshell, the Republican Chairman of the House Judiciary Committee, Bob Goodlatte, appears to have already let the cat out of the bag:

Goodlatte said he also asked Comey about the status of the request from the House Republicans on the referral “of potential impeachment — I’m sorry — potential perjury charges to be brought with regard to Ms. Clinton and he deferred to the Justice Department itself. He did not answer that question as well.”

The slip about impeachment reflected the GOP promise, if Clinton is elected, to doggedly investigate her.

Your correspondent spent his every youthful moment transfixed by Watergate 1.0 and the Nixon impeachment trial of 1973-1974. The manner in which it poisoned the environment in Washington and soon froze the very machinery of government was experienced close at hand, and has left an indelible memory.

And that was before the nation was sitting on a $20 trillion public debt bomb or had a rogue central bank seeding the financial system with FEDs (financially explosive devices). And it was at a time when Mexico was bankrupt, China was staggering under Mao’s starvation of 40 million and Japan was still exporting to America mostly motor bikes and transistor radios.

In a word, when Imperial Washington shuts down this time, there will be unfathomable economic consequences — and among them is the virtual certainty that there will be no hand-off of the “stimulus” baton to fiscal policy, as the foolish gamblers left in the casino insensibly anticipate.

Indeed, the GOP House — driven by the aroused citizens of Flyover America who will believe in their tens of millions that the election was stolen — will become a killing field for whatever desperate gambits the Clinton Administration and its confederates in the Eccles Building may concoct in response to crashing markets and a sinking economy.

There will be no pre-election bipartisan bailout consensus as in October 2008. What comes now is post-election partisan mayhem and the collapse of the nation’s preposterous house of financial cards.

Alas, it’s long overdue. And it’s the only way back to economic sanity.

P.S. I’ve gone ahead and reserved a free autographed copy of my book TRUMPED! A Nation on the Brink of Ruin… and How to Bring It Back for you. Click right here to learn how to claim it.

Click here to fill out your address and contact info. If you accept the terms, the book will arrive at your doorstep in just a few weeks.