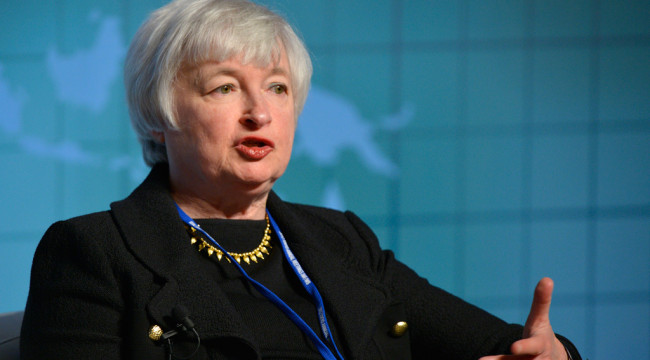 The level of high grade corporate debt outstanding has gone nearly parabolic in the last few years and now stands at more than 2X its pre-crisis peak. Yet even Yellen admitted during yesterday’s mindlessly meandering presser that business capital expenditure (CapEx) has been extraordinarily weak.

In fact, non-defense CapEx orders excluding aircraft peaked in mid-2104 and are now down by 10%. Even more to the point, real net fixed business investment after depreciation is still 20% below the level it each way back in early 2000.  That is, two bubbles ago.

Perhaps the question about where all this hand-over-fist corporate borrowing is going might have occurred to at least one of the geniuses who voted to stand pat. But apparently it didn’t because once again Yellen insisted that “valuations are largely in line with their historical trends.”

What in the world is our clueless school marm talking about? At the closing price yesterday, the S&P 500 traded at 25X the $87 per share reported for the last twelve month (LTM) period ending in June. And that was in the face of earnings that have plunged 19% since peaking in the September 2014 LTM period.

Yellen is right about the historical trends, of course. But not at all in a good way. In fact, on the eve of the last crash when the market peaked in October 2007 at about 1550, S&P 500 earnings during the most recent LTM period had posted at $79 per share. That means the peak pre-crash multiple was substantially lower than today at 19.7X.

Even when S&P earnings peaked at $54 per share in September 2000, the multiple was only a tad higher than today at 26.5X. So, yes, the market is in line with history.

That is, the history of crashes!

The truth is, the Fed is inherently, relentlessly and radically in the financial bubble business. But the Keynesian school marm who runs it wouldn’t know a bubble if one transported her to the moon and back.

In the meanwhile, she blathers on professing to see signs that 93 months of zero interest rates (ZIRP) are beginning to coax some “slack” out of the labor market.  In fact, the question is why the labor force participation rate for prime age adults at 81.3% is still lower than it was in late 2012 and far lower than the 83.3% on the eve of the recession.

Worse still, in the case of prime-age male workers there has been no upward blip at all. Despite massive intrusion in the financial markets and falsification of asset prices by the Fed, their participation rate has been marching downhill for decades, and for one good and substantial reason.

In today’s globalized, technologically dynamic, gig-based economy, labor market participation rates and labor slack” is not a monetary problem in the first place. It’s structural and rooted in global economics and domestic policies. Yet Yellen and her posse keep banging the money markets with their interest rate hammers because that’s the only tool in their chest.

Finally, we offer proof that the Fed is witlessly fueling another crash by referencing yesterday’s announcement by Microsoft of another $40 billion stock buyback program. Apparently, the last $40 billion “investment” in its own vastly inflated stock has already been completed.

The point here is that this exercise in Ponzi economics is being funded with cheap debt, compliments of Yellen and her ship of fools. In fact, Mr. Softie is sitting on a giant pile of cash, but has chosen to increase his balance sheet debt from $23 billion a decade ago to $54 billion today in order to what?

Needless to say, flooding Wall Street with this deluge of cash did wonders for its stock price. In fact, between June 2013 and the present, its market cap soared by $175 billion or 65%. And that was no inconsiderable feat because in no way, shape or form has Microsoft recovered its earnings mojo during the last 40 months.

To the contrary, its LTM net income of $16.5 billion for the period ending in June 2016 was down by 27% from three years ago. Indeed, it is only marginally higher than the $10 billion it earned way back on the eve of the dotcom crash in the year 2000.

The magic, of course, was in the PE multiple expansion. Gorging the Wall Street gamblers on these massive amounts of cash — some of it borrowed — its PE multiple soared from 15X to more than 35X recently. It still stands at better than 28X.

In short, Microsoft is a beached, no-growth old tech whale trading at the valuation multiple of a high growth youthful disrupter. In that capacity, it is just one more example of the bubbles that are invisible to the inhabitants of the Eccles Building.

Let’s be very precise. There is a massive arbitrage trade underway in which trillions of term debt and bonds are being funded with free overnight money gifted by the Fed and other central banks.

In turn, these speculative carry trades have driven benchmark debt prices to insensible heights, thereby unleashing a stampede for yield among fund managers and home gamers alike that knows no bounds.

To satisfy this relentless demand for yield, of course, corporate balance sheets have been strip-mined and leveraged like never before. Yet as all this cash flows into the stock market, it surely does not increase the productive capacity of American corporations by a whit. It simply inflates the stock market bubbles even further.

In short, instead of scrutinizing the “labor market” through the clouded lens of the Bureau of Labor Statistics mill, Yellen should spend a little time studying the bond market, and tracking down the flows of the trillions upon trillions of new cash that has been raised there.

Even she might then discover that valuations are not “normal” at all, and that the financial markets have, in fact, between transformed into bubble-ridden gambling dens.