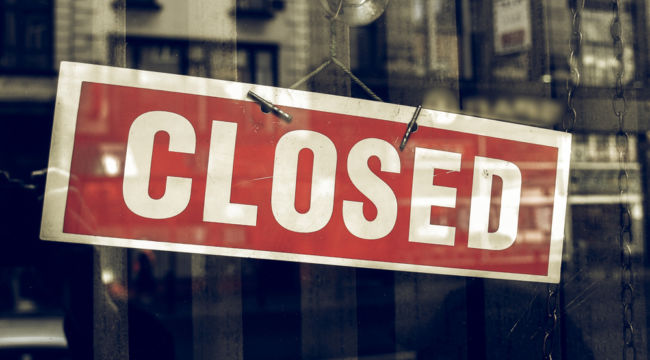 "Close the Whole Thing Up"

“This” is of course the Federal Reserve’s desperate harum-scarum yesterday afternoon.

The scoundrels of Zero Hedge label it part of the “the biggest emergency ‘shock and awe’ bazooka in Fed history.”

But we are not shocked. Nor are we awed.

Our only surprise is the scheduling — our hazard was a return to zero later this week.

Yet the business was so urgent, all hanging in balance… it could not even wait for this week’s formal FOMC confabulation (now canceled).

We were further informed yesterday that quantitative easing (QE) is commencing anew.

The Federal Reserve will purchase “at least” $500 billion of United States Treasuries — and $200 billion of mortgage-backed securities — $700 billion in all.

We are betting high on “at least.” This merely represents the opening installment.

That is intended to maintain dollar liquidity against the global coronavirus delirium presently obtaining.

The Fed is dusting off the financial crisis playbook, returning to bond buying, coordinating with other global central banks to provide access to U.S. dollar liquidity, cutting interest rates to zero and opening the Fed’s discount window to ensure the flow of credit through banks to consumers and businesses.

“It’s really great for our country,” gushed the president.

But is it? Did yesterday’s “shock and awe” bazooka blast score a hit?

Stock futures went careening last evening, so shocked, so awed were they. They promptly went “limit down.”

The future arrived this morning at 9:30 Eastern. And markets remained shocked and awed…

The Dow Jones plunged nearly 10% from the opening whistle. The S&P and Nasdaq followed in lockstep.

Once again the breakers tripped… and trading was suspended 15 minutes.

“The central banks threw the kitchen sink at it yesterday evening, yet here we are (with deep falls in stock markets),” yelled Societe Generale strategist Kit Juckes.

“This is what panic looks like,” hollered Patrick Healey, president of Caliber Financial Partners.

Yet we are not surprised. Markets can see the beads of perspiration forming about Mr. Powell’s forehead. Markets are flighty birds easily frightened.

And what telegraphs fear more than a “shock-and-awe bazooka”?

The shock and awe deepened throughout the day…

Another “Worst Day Since Black Monday”

We grow weary of repeating it. But the Dow Jones once again suffered its mightiest whaling since Black Monday, 1987.

And so additional trillions of stock market wealth vanish into the electricity, lost.

Losses accelerated towards day’s end. Why?

Late this afternoon the president said the “worst of the outbreak” could stretch into August.

Fear gauge VIX went skyshooting to 83 today — within shouting distance of its record 90 from October 2008.

And so we return to our opening question:

“If this doesn’t work… what will?”

Alas, the question is easier asked than answered…

“Just Close the Whole Thing up”

How are folks supposed to focus on trading stocks when they’re dealing with nervous kids out of school, spouses working from home and scrambling to keep up, all while managing their own anxieties? Just close the whole thing up and start again later. It’s the right thing to do.

It may be the right thing to do or the wrong thing to do. Regardless, it has been done before.

The stock market was suspended 10 days during the panic of 1873 — and four entire months at the outset of the First World War.

Examples abound. Most recently in October 2012 when a hurricane, Sandy by name, closed the market two days.

But now the Federal Reserve confronts a different variety of hurricane…

“The Fed is now in very serious trouble,” gulps Graham Summers of Phoenix Capital — whom we recently introduced to you, our reader.

“Put another way,” he continues…

The Fed can do NOTHING to stop this. No amount of rate cuts or stimulus from the Fed will make people want to go out and spend money if the country is on lockdown/facing a health crisis triggered by a pandemic.

The country is indeed verging upon a lockdown of sorts…

The Centers for Disease Control and Prevention has recommended that all sizable gatherings and events be “postponed” for the following eight weeks.

New York, New Jersey and Connecticut — home to a fair number of Americans — have taken aboard its counsel.

All gatherings of 50 persons or greater thus are banned.

We remind you that restaurants frequently entertain crowds exceeding 50. As do other dens of vice including drinking establishments, casinos, theaters, concert halls, ballparks, gymnasiums and houses of worship — to name some.

Houses of ill repute, we assume, must ration admission ruthlessly… else court the wrath of the law.

New Jersey residents are now confined to barracks between 8 p.m. and 5 a.m. All travel is “strongly discouraged,” save in emergency.

Meantime, Illinois bars and restaurants will close to the public beginning tonight. Their doors will not reopen until March 30.

Delivery and takeout services are available, however, as they are in New York, New Jersey and Connecticut.

Washington state has followed their example. As has the great state of Michigan. As has our own state of Maryland.

Massachusetts has exceeded even CDC’s draconian limit of 50. Gatherings of 25 or more are presently forbidden in this, the cradle of American liberty.

Meantime, over 30 million students in at least 31 states are exiled from the classroom. The Ohio governor has suggested his state’s may not come back until autumn.

Even the Supreme Court of the United States will no longer hear arguments — until early April at the earliest.

Do not forget, six of nine justices are aged 65 or above. And the coronavirus harbors a savage antagonism toward the elderly.

Thus a grateful nation is insured against a potential holocaust of justices.

A Ban on All Air Travel?

And now… rumors are on foot that a complete ban on domestic air travel is under active consideration.

We have assigned our men to investigate.

Regardless, the airlines are suffering damnably. Delta Air Lines claims conditions are worse than even the Sept. 11 afterblow.

“The speed of the demand fall-off is unlike anything we’ve seen,” laments Chief Executive Officer Ed Bastian.

The airline has gutted operations some 40%. And 300 planes are tied down to the tarmacs.

Meantime, all American cruise liners will remain tied up to the piers for 60 days.

A bailout of the air and cruise lines is on the way — depend on it.

So too, perhaps, is a bailout of the American citizen…

Sen. Mitt Romney (R-Utah) proposes to hand every American adult $1,000 per month so long as the coronavirus rages.

Reads a press release under his name:

Every American adult should immediately receive $1,000 to help ensure families and workers can meet their short-term obligations and increase spending in the economy.

Of course, the money must originate somewhere… as the government has none of its own.

In many cases it would amount to lifting money out of a fellow’s back pocket and lowering it into his front pocket.

But crises bring forth ideas that would never get a hearing otherwise. Many are of course lunatic.

Americans would acclimate rapidly to the monthly stipend. Who would take it away from them once the all clear signal goes out?

This is an election year, do not forget, when votes go up for sale. A monthly check can purchase many.

“The Worst Is yet Ahead for Us”

But just when might the coronavirus lose its stranglehold on American life?

“The worst is yet ahead for us,” warns Dr. Anthony Fauci of the National Institutes of Health.

We hope the fellow is mistaken.

We further hope the worst is behind for markets.

But we fear the worst is ahead for the economy.

And so again we ask:

“If this doesn’t work… what will?”