Today we turn away from the world of markets and manna.

Instead we turn our thoughts to civilization… and its discontents.

From Hong Kong to Spain, Azerbaijan to Brazil, civilization wobbles and gives.

And barbarism bares a menacing fang.

We are accustomed to riotous scenes from the basket cases of the world.

But Hong Kong is not Port-au-Prince. And Barcelona is not Khartoum.

Neither is Santiago, Chile…

Chaos Come to the Most Stable, Prosperous Nation in South America

Chile stands as the sturdiest, most placid and prosperous nation in South America.

It ranks 18th in the Heritage Foundation’s 2019 Index of Economic Freedom (these United States rank 12th).

Chile’s real GDP expanded 4.02% in 2018 — a paradise of growth compared with the United States.

As any nation of Earth, Chile is beset by social maladies.

Wealth inequality, for example, is high by world standards.

Chile’s “Gini coefficient” — a measure of wealth disparity — has it the 15th most unequal nation of the world. The United States ranks 39th.

And its democratic record is far from spotless. Between 1973 and 1990 it languished under the authoritarian rule of Augusto Pinochet.

But in all, Chile presently enjoys every reasonable blessing of civilization.

A License to riot

Why? Here is the proximate answer:

Yet that 4% pinprick tilted the precarious balance between order and chaos… and unleashed the hounds.

Protesters flooded the streets on Oct. 14.

As with any crowd of requisite bulk, madness was the rule — not the exception.

Barbarism put civilization to rout… and chased it from the streets. 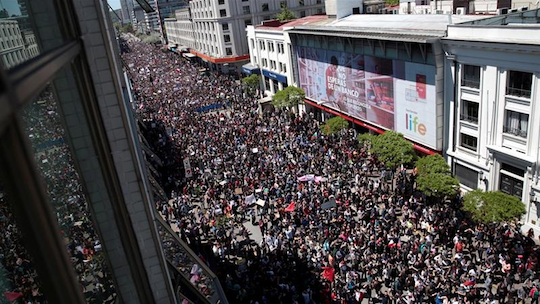 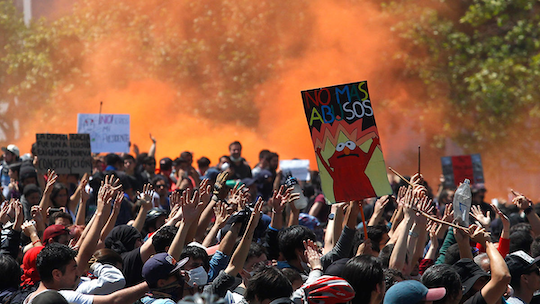 In came the army to restore order. Authorities have collared nearly 1,500 discontents and clapped them into jail. 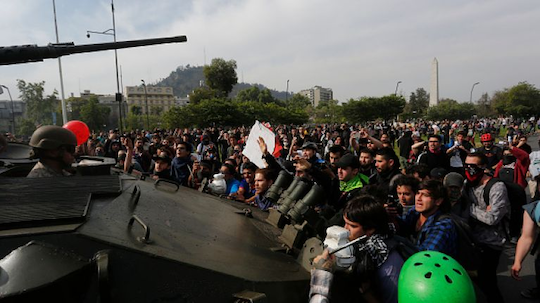 The Fragility of Civilization

Old Daily Reckoning hand Simon Black is an American expatriate. He esteemed Chile so highly he camped down there seven years.

And Simon draws disturbing lessons from the Chilean drama unfolding. Among them:

1) It can happen anywhere.

It’s not just Chile. Looking around the world right now we can see major demonstrations and even violence in places like Hong Kong, Spain, Haiti, Lebanon, etc…

People everywhere are tightly wound, and it doesn’t take much for them to become unhinged. If you think this can’t happen where you live, think again.

2) It can happen faster than anyone realizes.

The weather in central Chile is one of the great benefits of living there; it’s warm, sunny, and dry… southern California climate.

And this past Friday was a particularly beautiful day. By lunchtime, people were out in the parks enjoying the weather. It was calm, peaceful and joyful.

Within a matter of hours the city had turned into a war zone. Hours.

One of my team members told me on the phone yesterday, “If you had said on Friday afternoon that Santiago would be in chaos by nightfall, I would have laughed… And then it happened.”

Could It Happen Here?

It cannot happen here, you scoff. The United States crowns all civilization.

Anarchy and chaos could never “set up shop within our alabaster cities, much less take sickle to our fruited plains”… as Gore Vidal styled it.

Perhaps you are right — we do not argue otherwise.

But perhaps you are wrong.

Here at The Daily Reckoning, we patrol the extreme boundaries between reality and unreality.

Our journeys take us far out toward the ends of the bell curve… on the hunt for “black swans.”

Often we chase false returns — as our readers will cheekily remind us. But on rare occasion we find our quarry.

How many people believed Donald Trump would one day rise to the presidency of the United States?

Yet they all of them occurred.

Could the United States could descend into chaos and anarchy?

The Federal Reserve’s policies have vastly enriched the asset-owning classes lo these many years.

Meantime, lower- and middle-income Americans have lost their toeholds on the ladder of mobility.

Resentment roils and seethes beneath the seemingly placid surface.

And most 10-year economic growth projections show little in the way of promise.

Who can say what “4% fare increase” could tip an American city into violent chaos? And who can say the contagion wouldn’t spread?

Perhaps if we “break the skin of civilization”…  beneath we will “find the ape, roaring and red-handed.”

Below, Jim Rickards takes you to the year 2026. He reflects upon the great Panic of 2024… and a world drastically changed. Could it happen? You be the judge. Read on.