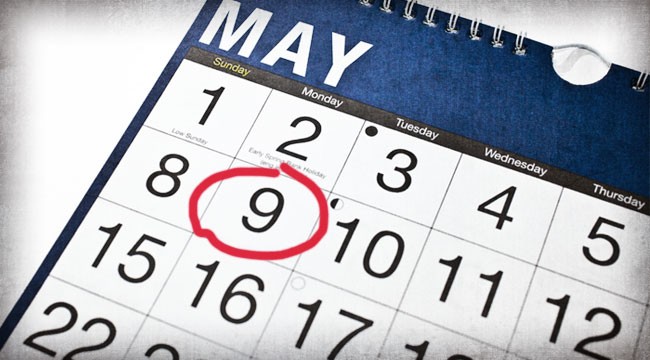 Circle May 9 on Your Calendar

Rogozin is the son of a Soviet-era, three-star general who ran a key research directorate of the former Soviet Ministry of Defense. He holds a degree in economics, and a Ph.D. in philosophy. He’s a trained helicopter pilot, as well as Russia’s former ambassador to NATO. Now he manages what Russians — very proudly — call that nation’s “military industrial complex.”

So, asked Solovyov, “what is it that worries the Americans the most?”

“What worries them most of all,” replied Rogozin to thunderous applause from a studio audience, “is our indomitable will.”

Yes, I know; typical Russian drum-banging. Then again, Rogozin can back it up.

“We are now re-equipping our armed forces at a great pace,” he declared. Off the top of his head, Rogozin rattled off a remarkable set of statistics — accurate, as best I know from public sources — about the upward spike in Russian weapon output in the past four years, since he took the defense job in 2011. This means aircraft, helicopters, rockets, surface ships (including new icebreakers for the Arctic), submarines, electronics, robots and much more.

“There’s a feeling of pride,” commented interviewer Solovyov, “when it’s not just our own, but the best in the world” Rogozin nodded, and smiled. “The USA is now genuinely worried about our plans for equipping our armed forces,” he noted. “These aren’t just plans,” he said, “but real volumes… and a high and yearly increasing quality of equipment.”

No kidding. Russia is completely recapitalizing its massive array of intercontinental ballistic missiles, for example. This, while U.S. missile crews babysit ageing systems that were designed and built in the 1960s. “I can’t say the exact number because it is classified,” stated Rogozin. “But we are adding tens of new ballistic missiles every year.”

Rogozin didn’t go into technicalities of weapon systems whose names he rattled off. It wasn’t the forum to get into the weeds, so to speak; thus he explained things at a higher level of understanding. “Intelligent weaponry… will permit [operators] to move the zone of risk away from their battlefield, control weapons and engage the enemy before he is able to see them. Give [the operator] the capability to hit the enemy before the enemy is able to hit him.”

Yes, 200-plus miles; you read that correctly. In other words, you could launch a Russian missile from Pittsburgh, and take out aircraft flying near Washington, D.C.

Consider the new, Su-30-series family of aircraft, with its massive, forward-looking radar, armed with long-range Kh-31 and R-172 air to air missiles.

Americans know, Rogozin followed up, speaking calmly and thoughtfully, “that it is neither machines nor even unique inventions which will lead to technical supremacy.”

Still, however, despite this broad point, he wasn’t afraid to lay some heavy “technical supremacy” truth straight down on the slab of fate. “Our [Russian] missile development has reached a point where both the current and future American anti-ballistic missile capabilities are incapable of impacting the Russian strategic missile potential.”

Oh really? Someone might want to mention that to a few U.S. Senators. Then again, perhaps we should “all just get along,” as the late Rodney King opined during the 1992 Los Angeles riots.

Moving along breezily, Rogozin minced no words about how deeply Russia now perceives the U.S. as a threat. “Everything they [the U.S] have done and are doing is aimed at destroying our economy through the application of sanctions targeted at particular sections of our economy.”

Remember, this is Rogozin speaking Russian, to a Russian interviewer, intended for a Russian audience. Westerners — certainly most Americans — almost never listen in on these kind of candid talks. Perhaps we should…

Rogozin isn’t bashful about naming names, either. “You don’t need to be a political specialist,” he said wryly, “to understand that they [the U.S.] want to simply crush us — like Obama promised to crush us, like a bug underfoot. So now, they won’t crush us. They can’t do that now.”

Then he added, “The U.S. and President Obama — and let’s lay it on the table; every wrong has a perpetrator with a Christian name and a surname — in person, is using the events in Ukraine” as a basis to harm Russia and its interests.

“We do not want to see the tragic events which we see, every day, in Ukraine, repeat themselves here [in Russia],” he added. Thus, Russia is “independently developing our country, and taking an independent role in the world.”

Rogozin is referring, of course, to the U.S./NATO-sponsored coup in Ukraine last year; followed up by the ongoing, bloody, destructive Ukraine civil war. It’s all happening right on Russia’s doorstep — in Russia’s historical “near abroad” — under circumstances that violate clear assurances that Western leaders gave to Soviet leaders in 1991, during the peaceful demise of the Soviet Union. Just sayin’…

Looking ahead, according to Rogozin, “Russia’s military industrial complex is the driver of all industry, science, technology and all that is the leading edge that can make Russia the leading nation of the 21st century.” The idea is, in essence, is to leverage Russia’s aggressive military-industrial effort to build up a civil-consumer sector as well, per Rogozin.

For example, in the arena of civil aviation, “We [Russia] will decisively remove competitors from our internal markets, and place our aeroplanes on all routes, from short haul to long haul.” This bodes poorly for future sales by Boeing (BA: NYSE) and Airbus to Russian airlines.

“We have the opportunity to reestablish the productive base [of Russia] that was lost in the 1990s,” Rogozin added, alluding to the immediate post-Soviet era when, in the eyes of most Russians, oligarchs and foreign carpetbaggers looted the place.

Rogozin exhibits complete seriousness of purpose in his comments. “Today, defense and the consumer sector that is created by defense represents our investment in the future of our country. But it is more than that. It’s the means of our very survival.”

Indeed, Rogozin views his nation as all but under attack by the West, led by the U.S. “The crisis in which we find ourselves, fighting for the survival of our country” will lead to a major “transformation,” he stated. “Our nation will emerge from the crisis stronger than she was before.”

Meanwhile, per Rogozin, “The Americans want to cut off their nose to spite their face, saying that they no longer want to buy our rocket engines. … But now they understand that there is no competition.”

Rogozin exhibited a palpable bitterness towards U.S. policy. “They [Americans] are strangling us with sanctions. We cannot buy what is critical to us. … We cannot receive even our own money, for things that were sold by us. Our money is frozen because of sanctions against our banks.”

Russia is planning a major parade and celebration for May 9, 2015, marking the 70th anniversary of the end of the war with Nazi Germany in 1945. “We’ll show our newest equipment,” he said with a smile. “May 9 is the date in our calendar which divides us from friends and foes.”

In my view, after watching Rogozin and listening carefully to what he has to say, we in the West have three months to come to an arrangement with Russia, and develop a modus vivendi in Europe and across the world.