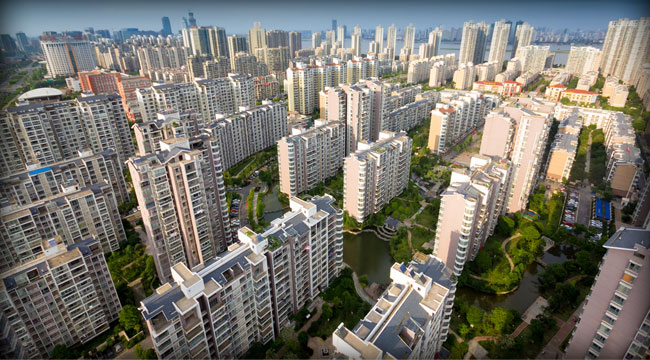 The Chinese economy, like most others, rests on a shaky foundation of credit. The country has completed the largest building boom in history — a boom that depended on unsustainable growth in the supply of money and credit.

With China’s late 2008 surge in bank lending, the second faction’s priorities — construction and industrial activity of all kinds — won out. But ever since inflation heated up, threatening social stability, the first faction grew more concerned about its hold on power.

Because of concerns about social stability, China’s central bank, the People’s Bank of China (PBOC) started tightening liquidity to the official banking system. Such tightening had the potential to spark a panic in real estate and banking a few years ago.

But no panic ensued…

Instead, overstretched borrowers and local governments migrated to off-balance sheet structures within the “shadow” banking system. The loans that funded busted projects were, in many cases, not rolled over during China’s credit tightening phase of 2010-11. Shunned from the banking system, stressed borrowers were desperate to find new sources of funding. They found high-interest, short-term funding from “trust” companies. As part of the shadow banking system, trust companies match savers looking to earn high interest rates with desperate borrowers.

At the end of 2012, borrowers scrambled to secure loans from trust companies. According to the PBOC, trust loans rose 679% in the year ending December 2012, to 264 billion yuan ($42 billion). High-interest rate trust loans now make up 16% of China’s entire pool of financing. Trust loans, like payday loans in the U.S., have short maturities. Short-term trust loans amount to an estimated 50% of Chinese GDP, so liquidity crises can quickly spiral into solvency crises.

Trusts rely on funding from the official banking sector, and in recent weeks, the PBOC has directed the banks to ration credit to shadow banks. “The [PBOC] has made it clear that it intends to penalize those aggressive lenders and crack down on the potential for moral hazard,” writes Credit Suisse analyst Dong Tao in a June 20 note. “Some small-medium-sized banks have deployed an excessive amount of liquidity into high-yield/high-risk assets [like trust loans]… counting on the central bank’s rescue in case that liquidity gets tightened.” The central bank told banks to look elsewhere for liquidity. “To us, this is a sign of brinkmanship,” Tao concludes.

When the Chinese banks looked for liquidity outside the cozy confines of the PBOC, they found it scarce and expensive. The banks demanded higher interest rates to lend to each other. When one bank fears another bank might have exposure to dodgy trust companies, it now demands a high interest rate to compensate for risk. The Shanghai Interbank Offered Rate (SHIBOR) — the rate banks charge each other for loans — spiked dramatically.

SHIBOR rates have fallen a bit since the PBOC injected some liquidity into the system. But the PBOC issued a terse memo on liquidity management practices to the banks on June 24. Credit Suisse’s Tao explains: “We take this as a gesture from the central bank that ‘teaching a lesson’ is probably over, but it could tighten the liquidity again should it feel banks are misbehaving.” The PBOC, in other words, will ensure liquidity is sufficient to allow for an orderly deleveraging of unviable shadow banking entities. But the deleveraging (credit contraction) process will not be stopped.

Loans to these LGFVs are in a sort of netherworld. The Chinese banks think they are going to be “money good” because they are quasi-government entities. But a study of LGFVs conducted by banking regulators a few years ago discovered that a staggeringly high number of these LGFVs couldn’t generate enough cash to service their debts. Some estimate that up to half of these loans could go bad.

Everyone expects that the government will bail out LGFVs when they default, after losing funding from the trust loan market. But the central government may not ride to the rescue. Political leaders concerned with stability and inflation seem determined to purge excesses. The will to reform and restructure will be tested, because the bubble’s excesses were staggering…

Short selling legend Jim Chanos is a vocal bear on China. He famously described the country as stuck on a “treadmill to hell.” In other words, Chinese leaders feel the need to sustain frantic levels of construction and infrastructure activity for fear that the economy would crash without it; yet more and more construction results in lower and lower incremental returns on investment.

Chanos illustrated the scale of China’s new office and residential apartment construction; it’s so enormous that it’s hard to grasp: 31-32 billion square feet of new office space was constructed in just 18 months after China’s 2008 bank-funded wave of stimulus. To put the number into perspective, it’s equivalent to a 5-by-5 office cubicle for every man, woman and child in China.

Chanos thinks the biggest myth of all about the China investment story is the myth of limitless urban migration. This myth involves 15-20 million people per year moving from rural areas to urban areas. But the migrants into cities are among the lowest-wage workers, and, ironically, many have migrated simply to construct the very condos that they can’t afford.

Another myth Chanos busted is the idea that most Chinese real estate investors are all-cash buyers — or at the very least invest with hefty down payments. But much of this “all-cash” buying is funded by loans sourced elsewhere, such as loans drawn from corporate credit lines.

Whatever the source of down payments for real estate, the bottom line is that Chinese banking system assets grew at 25% per year and the shadow banking system grew at 10% per year. Thirty-five percent credit growth never ends well, but it’s fun while it lasts.

Everything in China is about making the GDP number. Politicians are fixated on the result, rather than how they get there. But GDP — adjusted for wasteful, uneconomic projects — will ultimately be much lower. We’ll see how much lower when the government recapitalizes the Chinese banking system — both official and shadow banks.

By the end of the banking system restructuring, China’s reputation will have taken a big hit…

The biggest construction project in history will have ended; the supply of newly printed yuan, printed to fund the banking system restructuring, will have ballooned; the savings of a hardworking population will have been wasted on boondoggles; and China’s growth story, as its population follows Japan into an aging demographic cycle, will end with a whimper.

Ed. Note: All this week in The Daily Reckoning email edition we’re setting our sights on the Middle Kingdom. From its debt-based growth to its troubled banking industry. Don’t miss out on all the fun. Click here now to sign up for free, and get The Daily Reckoning delivered straight to your email inbox.