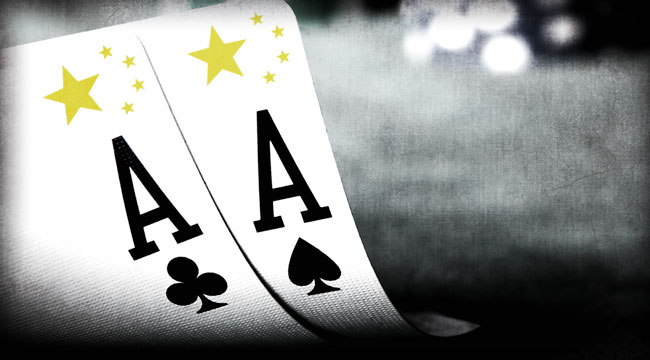 Here we are, nearly every asset class is selling off and the Fed’s preferred measures of inflation are so low they’re in the Fed’s panic zone. It seems like right now, from their standpoint, the playbook isn’t working. What gives?

“There’s an ideal playbook, and it would look something like this:” explains Jim Rickards, author of Currency Wars, “You’d have higher inflation than we’d have today, but not super high. It might be in the 3-4% range. GDP of maybe 5% — which is pretty high — and then that would bring down the debt-to-GDP ratio so the United States doesn’t look like Greece.”

But if we look closely, says Rickards, none of that is happening. There’s no inflation…in fact, the Fed is talking about deflation, which to them is worse. Instead of a weaker dollar, we have a stronger one. Interest rates are rising, but without any inflation, we’re getting positive real rates.

“I don’t think the market correction was really about believing that the Fed would actually ‘taper,’” he continued, “the way they said they’re going to or raising interest rates in 2014, which I don’t think anyone expects, although there was a lot of talk about that.”

Mr. Rickards thinks the Fed is way off the mark about the economy’s health. Bernanke thinks the economy is in much better shape than it really is. “My expectation between now and [the next major Fed meeting in] September,” he told us, “is that as the data come in, it’ll be very clear their forecast is wrong, again. You look at the Fed’s forecasts for the last four years, they were wrong every time, and they were wrong by a lot — meaning why should we believe the forecast now? [See chart nearby.] They’re not going to taper.” 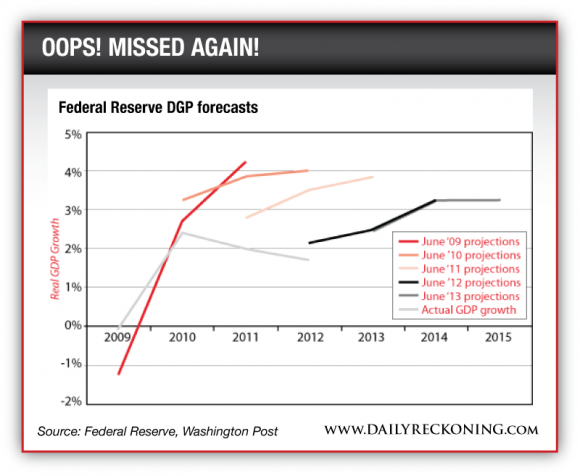 After September, things get even more interesting. After all, Jim reminds us, Bernanke will be a lame duck. That means his last Board of Governors meeting will be in January. “We can’t be certain of this,” Rickards qualified, “but it seems very unlikely that he’s going to do anything dramatic on his way out the door. If Bernanke actually does taper in September, which I don’t expect, it’s going to be a shock to the markets, and we’re going to see more of a drawdown in gold, a drawdown in stocks, etc.”

After we had our fill about the Fed, we pivoted to gold. The People’s Bank of China last revealed its total gold holdings in April 2009 — 1,054 tonnes — and they could use it as a weapon in the currency wars.

“I don’t know specifically” he said. “I certainly don’t want to pretend I have that date here on my desk.” But he said he expects the Chinese to give an update of their official gold figures at the end of the first quarter in 2014. That date would match with China’s previous announcements.

He confirmed that “they made that announcement in April 2009. The last prior announcement was, I think, five years earlier.” But he told us something more important: “If you’re China, the last thing you want to do is be transparent about your gold purchases, because it will drive the price up.”

So, we wondered, what will make the Chinese reveal their true gold purchases? Mr. Rickards answered simply they’ll do it when they “have enough gold that you don’t need more. In other words, they may want more, they may buy more, but they want to be in a position where they just raise their hand and say to the world, ‘Hey, we’ve got our gold, now we’re a player. Now when the international monetary system collapses and the world has to reconfigure the system, we get a big seat at the table.’”

According to his best information…China is there already. To be clear, no one really knows –except for maybe a member of the Communist Party, says Jim. “But I have spoken to a number of sources in Asia,” he told us, “I’ve spoken to a number of people who are very close to the physical market, I’ve done my own investigations, etc. Every time I have an estimate and try to verify it, what I get back is that I’m wrong on the low side.”

So he expects that come April 2014, China will announce that they own 5,000 tonnes of gold.

“That should be an earthquake. Because even the gold deniers, the gold doubters, are going to have to sit up and take notice. Either the Chinese are dopes, which they’re not, or people will start to get gold, which I think they will.”

If these scenarios played out, gold would go a lot higher. Jim told us it could go up in a very short span of time, say, 90 days or at the most six months.

“The world of $4,000 gold is the world of $400 oil, $100 silver, higher prices for copper, corn, wheat and everything else,” he continued. “In other words, it’s a world of very high inflation in which the value of your retirement funds and your annuities, etc., have been wiped out.

In that case, there will be winners and losers. As Mr. Rickards explains, the winners will include those that hold gold. “That’s going to be a very small minority. It’s a small minority today. It might get a little bit larger, but that’s not most of the population.”

The losers will be everyone else. “So,” Jim explains, “you’re going to have this resentment, this political resentment, where the vast majority of the people who just sort of took it on the chin are going to be looking at a small number of people who protected themselves, and they’re going to say that’s not fair. And we’ve seen this before. Congress has a way of dealing with it, which is a windfall profits tax.”

He was quick to add that laws like that don’t happen overnight — there’s a legislative process that bogs it down. “Secondly,” he adds, “you should be able to see it coming and maybe pivot out.”

Per Mr. Rickards’ recommendation, “buy your gold at current levels — $1,200, $1,250 — and ride the wave up to these much higher levels, $4,000-5,000 an ounce, and then assess the situation. Be nimble. I don’t think you can just write a game plan today and say here’s the plan and just follow it step by step. That’s nonsense. You have to be nimble, you have to be following developments, you have to be prepared to change your mind based on new news.”

Addison Wiggin
for the Daily Reckoning

Ed. Note: This piece is a lot more in depth in The Daily Reckoning’s email edition. If you’re not yet getting the Daily Reckoning — sent straight to your email inbox every day around 4 p.m. — you’re only getting part of the story. Click here now to sign up for free.