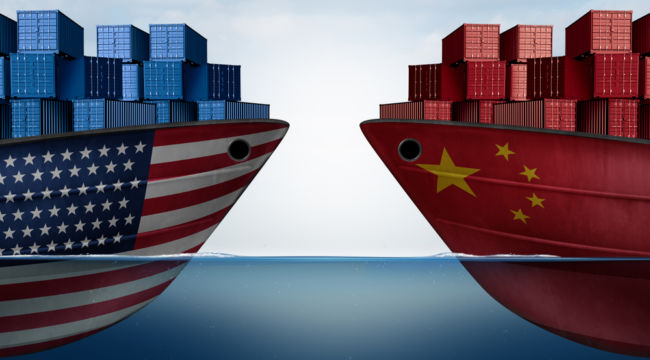 For years, we’ve been hearing about and reading stories on the coming dominance of the Chinese economy. The story line is that China is growing faster than the U.S., has a much larger population and a growing military capability, and that it is just a matter of time before China surpassed the U.S. as the hegemonic power in East Asia and the Western Pacific.

There is certainly some merit in these arguments.

China also has the fifth largest nuclear arsenal in the world with 280 nuclear warheads, about the same as the UK and France, but well behind Russia (6,490) and the U.S. (6,450).

China has the second largest economy in the world at $15.5 trillion in GDP, behind the U.S. with $21.4 trillion, and well ahead of number three Japan with $5.4 trillion. China’s foreign exchange reserves (including gold) are the largest in the world at $3.2 trillion. Hong Kong separately has $425 billion in additional reserves.

And China is the largest gold producer in the world at about 500 metric tonnes per year.

By these diverse measures of population, territory, military strength and economic output, China is clearly a global super-power and the dominant presence in East Asia.

In its most extreme form, the story line about China’s inevitable ascent says the 1800s were the “British Century”, the 1900s were the “American Century”, and the 2000s would turn out to be the “Chinese Century.”

This narrative was proposed by the same globalist elites from the universities and think tanks (many of whom are Americans) who proposed open borders, zero tariffs, global supply chains and outsourcing of U.S. jobs.

But as usual, the elites are wrong on all counts.

Open borders put downward pressure on U.S. wages. Zero tariffs meant goods could be made in cheap labor countries like China and shipped to the U.S. duty free. Outsourcing destroyed perfectly viable U.S. operations in steel, autos and electronics and moved those jobs to sweatshops and prison-labor camps in China. The result was a declining U.S. economy and greater income inequality.

Finally, the U.S. is fighting back. Trump’s tariffs have slowed export-led growth in China and expanded U.S. manufacturing. More importantly, China’s growth is slowing for internal reasons that are not entirely related to the trade wars.

China has grown with investment, but most of that investment has been wasted on empty “ghost cities” and other white elephant infrastructure that cannot pay its way. China is weighed down with trillions of dollars in dollar-debt that it cannot easily repay without depleting its dollar reserves.

China’s banking system is insolvent and much of its real estate investment has been financed with “wealth management products” that cannot be paid back because the financing is little more than a gigantic Ponzi scheme.

Most importantly, at $11,000 per capita GDP, China is stuck squarely in the “middle income trap” as defined by development economists. The path from low income (about $5,000 per capita) to middle-income (about $10,000 per capita) is fairly straightforward and mostly involves reduced corruption, direct foreign investment and migration from the countryside to cities to pursue assembly-style jobs.

Among developing economies, excluding oil producers, only Taiwan, Hong Kong, Singapore and South Korea have successfully made this transition since World War II. All other developing economies in Latin America, Africa, South Asia and the Middle East including giants such as Brazil and Turkey remain stuck in the middle-income ranks.

And trade wars with the U.S. are escalating, not diminishing.

Trump’s recent decision to delay many of the 10% tariffs on the remaining $300 billion of Chinese imports not currently tariffed will help China to some extent.

But China’s initial shock devaluation of the yuan below 7.00 to one dollar, a level that had previously been defended by the People’s Bank of China, shows just how badly China is losing the trade war.

It is also counterproductive because it will incite more capital outflows from China. The Chinese lost $1 trillion of hard currency reserves during the last round of capital flight (2014-2016) and will lose more now, despite tighter capital controls.

The spike of bitcoin to $11,000 following the China devaluation was a symptom of Chinese people using bitcoin to avoid capital controls and get their money out of China. It’s at 10,693.80 today.

The unrest in Hong Kong is another symptom of the weakening grip of the Chinese Communist Party on civil society. The unrest spread from street demonstrations to a general strike and shutdown of the transportation system, including the cancellations of hundreds of flights.

This social unrest will grow until China is forced to invade Hong Kong with 30,000 Peoples’ Liberation Army troops now massed on the border. This will be the last nail in the coffin of the academic view of China as a good global citizen. That view was always false, but now even the academics are starting to understand what’s really going on.

There’s even speculation that the Hong Kong protests are being organized with outside help to goad China into another Tiananmen-type crackdown. That would isolate China internationally and derail its plans for a Chinese-led economic integration of Eurasia and beyond through its Silk Roads project.

International business is already moving quickly to move supply chains from China to Vietnam and elsewhere in South Asia. Once those supply chains move, they will not come back to China for at least ten years if ever. These are permanent losses for the Chinese economy.

With slower growth, declining reserves and massive debt, the stresses in China’s economy are now apparent to all, despite upbeat talk from Beijing. The collapse in China will accelerate and result in capital controls, asset freezes and political repression of social disorder. This collapse is just getting started and has far to run.