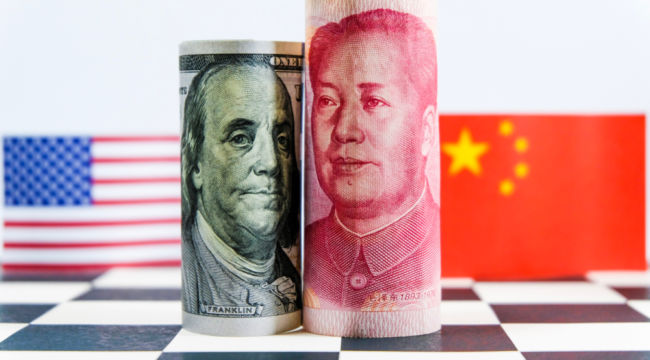 U.S. policy through the Bush and Obama administrations was simple. It looked the other way at questionable Chinese trade practices, technology and intellectual property theft, etc. In return the U.S. got cheap manufactured goods and China’s willingness to finance trillions of dollars of U.S. government debt.

But President Trump came along and changed the rules of the game. He’s said lost jobs in the U.S. are not worth the cheap goods and cheap financing. He bet that China had no alternative but to keep producing those goods and keep buying our debt, even if the U.S. imposes tariffs to help create manufacturing jobs here.

Trump is right that China needs the U.S. to sustain economic growth. China’s economy is not just about providing jobs, goods and services. It is about regime survival for a Chinese Communist Party that faces an existential crisis if it fails to deliver.

Once the Chinese job machine stalls out, popular unrest could emerge on a scale much greater than the 1989 Tiananmen Square protests. This is an existential threat to Communist power. It appears that a Tiananmen-type incident will be avoided in Hong Kong. But if a resolution hadn’t been found, it is very likely China would have crushed the protests ruthlessly. It will not tolerate threats to its authority.

But if China encounters a financial crisis, Xi could quickly lose what the Chinese call, “The Mandate of Heaven.” That’s a term that describes the intangible goodwill and popular support needed by emperors to rule China for the past 3,000 years.

The story isn’t new, but China has serious structural economic problems and its internal contradictions that are finally catching up with it.

The investment component was thinly disguised government spending — many of the companies conducting investment in large infrastructure projects were backed directly or indirectly by the government through the banks.

This investment was debt-financed. China is so heavily indebted that it is now at the point where more debt does not produce growth. Adding additional debt today slows the economy and calls into question China’s ability to service its existing debt.

China is now confronting an insolvent banking system, a real estate bubble, and a $1 trillion wealth management product Ponzi scheme that is starting to fall apart.

Chinese growth has been reported in recent years as 6.5–10% but is actually closer to 5% or lower once an adjustment is made for the waste.

The Chinese landscape is littered with “ghost cities” that have resulted from China’s wasted investment and flawed development model. What’s worse is that these white elephants are being financed with debt that can never be repaid. And no allowance has been made for the maintenance that will be needed to keep these white elephants in usable form if demand does rise in the future, which is doubtful.

The move to high-income status requires far more than simple assembly-style jobs staffed by rural dwellers moving to the cities. It requires the creation and adoption of high-value-added products enabled by high technology.

China has not shown much capacity for developing high technology on its own, but it has been quite effective at stealing such technology from trading partners and applying it through its own system of state-owned enterprises and “national champions” such as Huawei in the telecommunications sector. But now the U.S. and other countries are cracking down on China’s technology theft.

Most importantly, at $11,000 per capita GDP, China is stuck squarely in this middle income trap, as defined by development economists. The path from low income (about $5,000 per capita) to middle-income (about $10,000 per capita) is fairly straightforward and mostly involves reduced corruption, direct foreign investment and migration from the countryside to cities to pursue assembly-style jobs.

Among developing economies (excluding oil producers), only Taiwan, Hong Kong, Singapore and South Korea have successfully made this transition since World War II. All other developing economies in Latin America, Africa, South Asia and the Middle East including Brazil and Turkey remain stuck in the middle-income ranks. And that’s where China is right now.

China is confronting social, economic and geopolitical pressures that are testing the legitimacy of the Communist Party leadership and may lead to an economic crisis of the first order in the not distant future.

The trade war is prodding international business to move supply chains from China to Vietnam and elsewhere in South Asia. Once those supply chains move, they will not come back to China for at least ten years if ever. These are permanent losses for the Chinese economy.

My view is that a crisis in China is inevitable based on China’s growth model, the international financial climate and excessive debt. A countdown to crisis has begun.