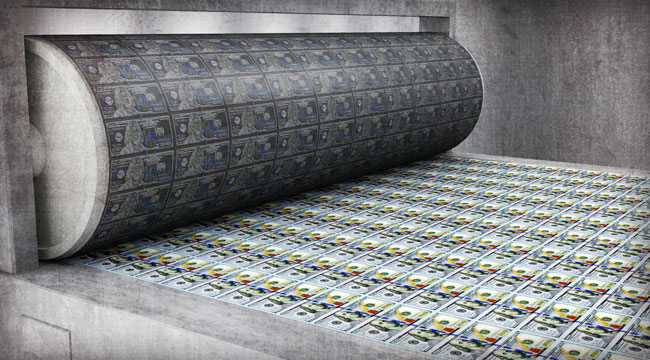 An almost 6-foot-tall Jeff Koons white plaster sculpture of a woman holding three Hermes Birkin bags sold for $4 million last night at a charity auction in New York, 60% more than similar works fetched in the past.

The sale of “Gazing Ball (Charity)” followed last week’s tally of $673 million for Impressionist and modern art sold at Manhattan auctions, setting the stage for a potential record season if high prices continue this week.

“I’m long-term bullish on the art market,” Rajiv Chaudhri, president of Sunsara Capital LLC in New York and an art collector, said at the event at the Four Seasons restaurant in New York. “Prices will keep moving up. There is still so much private wealth being created. Art is the ultimate asset.”

First, private wealth is not being created; it is being fabricated by central banks.

Second, art is not the ultimate asset but probably a poor and unreliable one.

And third, the art market is not going up the way he imagines. When the money drains away, the aficionados will be punished: They’ll be stuck with their purchases.

Still, Mr. Chaudhri is right about one thing: There’s a lot of money around.

Central banks have created oceans of liquidity. Like water, it had to go somewhere.

Where did all this money come from?

We’ve seen estimates for the effect of QE on the balance sheets of the country’s asset holders. Over the last five years QE has added between $2.5 trillion… to as high as $9 trillion.

Now, with so much loose change in their pockets, the rich can bid for Jeff Koons’ confections… Manhattan condos… or whatever they want.

But that still leaves the question: Where does the money come from?

You already know the answer: from the central banks. And you know where they got it: from nowhere.

Central banks have created oceans of liquidity. Like water, it had to go somewhere. In the event, it went into stocks, real estate, art… and many other things.

And now that the QE program is officially on “pause” in the US, the Japanese and the Europeans are taking over.

“ECB council backs €1 trillion euro-zone rescue,” was the headline in the Financial Times as last week came to a close.

“Mario Draghi has secured unanimous support from the European Central Bank’s governing council to inject €1 trillion to rescue the Eurozone economy from stagnation,” continues the report.

And that comes on the heels of remarkable reports from Japan.

The Bank of Japan has a new governor, Haruhiko Kuroda. Apparently, he is even more reckless and retarded than Prime Minister Shinzō Abe.

Kuroda has upped the central bank’s asset buying to ¥80 trillion ($700 billion) a year. And part of the deal includes direct purchases of Japanese REITs and ETFs. As the Real Time Economics blog reports:

In addition to bonds, the BoJ is investing heavily in private assets […] by buying stocks in the form of exchange-traded funds, or ETFs, and real estate through Japan real estate investment trusts, or J-REITs. Those assets had been in the mix before, but will be tripled. The figures are small compared to the JGB purchases — ¥3 trillion for ETFs, ¥90 billion for J-REITs — but can have a big influence on markets.

The Japanese are the trendsetters — at least in the world of suicidal financial policies. So, it probably won’t be long before the Fed gets back into the money-printing business.

Most likely, it’ll wait for the stock market to crack. Then it, too, could begin buying stocks directly.

The US stock market will fall because there is less and less fabricated money holding it up. The $3.6 trillion in QE helped push up the S&P 500 by 200% since its crisis low on March 9, 2009.

…liquidity will drain away — gradually… and then suddenly.

But QE is, as we said, now on “pause.” And the money-printing operations in Japan and Europe will probably not leak fast enough into the US to keep the water level high.

Instead, liquidity will drain away — gradually… and then suddenly.

Not only has QE stopped, but so has the big boost that the US used to get from its trade deficits.

At its peak, America’s current account deficit reached $800 billion. That money — largely credit-financed — went out of the US to buy foreign-made goods.

To stop their currencies from appreciating versus the dollar, foreign central banks — particularly the People’s Bank of China — had to print local currency to buy these dollars. They then reinvest these dollars back in the US. This was like QE before there was QE, says our friend Richard Duncan.

The US got a flood of liquidity from overseas money-printers. This is what helped inflate the stock market bubble of 1999 and then the housing and financial bubble of 2008.

But that’s gone too.

This will mean less buying of US assets by the foreigners… and “excess liquidity” to float asset prices. The energy boom will not buoy up asset prices; it will help sink them.

Ed. Note: Over ten years ago, Bill Bonner co-founded The Daily Reckoning with fellow New York Times bestselling author Addison Wiggin. Since its inception it has been one of the most informative and entertaining reads you can find anywhere in the world. And right now, you can get The Daily Reckoning sent straight to your email inbox, absolutely FREE. Click here now to sign up and discover all the unique benefits the Daily Reckoning email has to offer.

Expect the Fed to Pause if Volatility Continues

This former Wall Street insider reports on why you should expect the Federal Reserve to hold off on acting in December if volatility rises. Here’s what that could mean for your savings and the financial system… Get the full story here…