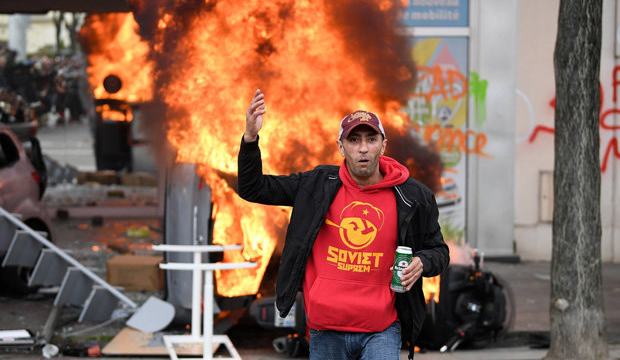 Workers around the world flooded the streets to babble their woes… and issue their demands.

In Paris, protesters took aux barricades to commemorate the 50th anniversary of the famous 1968 student revolt.

Other cities were scenes of relative peace.

But the grievances were similar.

Typical are these comments by one protester in Berlin:

We have more rich and even richer people than we ever had before. And on the other hand, work and working conditions for workers continuing to get worse.

It is the eternal battle of the haves… and the have-nots.

But as a patriotic citizen of these United States, our concern is with the hard-put American worker.

It is this Jack, this Jane, who — like us — hews the nation’s wood and draws its water.

Government statisticians assure us this American is doing swell.

The economy is at “full employment.”

And Friday’s GDP report reveals worker compensation is increasing at a 2.7% annualized rate — the highest since 2007.

The president himself assures us the American people are “winning”:

… America is strong and roaring back. Paychecks are climbing. Tax rates are going down. Businesses are investing in our great country. And most important, the American people are winning.

The Commerce Department has released the latest inflation numbers.

Consumer prices — excluding food and energy — rose at a 2% annual rate the first three months of 2018.

Once you account for rising fuel prices and their downstream effects…

Does the 2.7% wage increase keep step with actual inflation?

Into one pocket the extra money comes. Out the other it goes.

Where, may we ask, is the worker’s gain?

Is the hamster’s wheel a symbol of victory?

But screwing over everyday people seems to be part of his daily life.

Just watch this video to see for yourself…and hear the stories of everyday Americans who triumphed despite guys like him.

We’ve seen the biggest increase in food and energy outlays since 2011, accounting for 30% of the increase in consumer spending in the past six months, up from 11% in the two years prior. Consumers have had to draw down whatever savings they amassed after the crisis and run up credit card debt to keep up with the basic necessities of life.

Meantime, Bloomberg informs us that labor productivity has averaged a mere 0.7% annual growth since 2011.

The president also speaks of businesses investing in our great country.

But capital expenditures (capex), an indicator of business investment, fell in March — its third decline in four months.

And we are reliably informed that real business investment has trended lower for years.

Paychecks are keeping pace with inflation, nothing more. Just as they did during the Obama years.

Real business investment has been on a downward trend for at least the last seven years. That trend is still in place.

As a result, labor productivity continues to decline, too… averaging only half the rate of its historic average…

Which leaves the American people not winning at all.

But David can be a curmudgeonly fellow, prone to sourness.

Surely the American worker has it better than David describes.

So let us turn to The Daily Reckoning’s cheery co-founder Bill Bonner:

The richest 10% has gotten almost all the wealth gains of the 21st century. That means 90% of the population has gotten nothing.

The median man, for example, has lost real income (when adjusted for inflation), not just for the last 18 years, but for the last 40.

That ain’t getting ahead. It’s falling behind. His major asset — his time — has become 20% less valuable.

Kind heaven, no — has the American worker lost his toehold on the ladder?

Against the theory that you must first feed the horses in order to feed the sparrows… it appears the sparrows have gone hungry.

And does it not explain how Donald Trump came to occupy his current address?

But we fear the president will fall short of the glory.

As of today, May 1, the post-2008 economic recovery is officially the second-longest on record.

The average post-WWII recovery is 58 months.

In the late ’90s, by contrast, GDP advanced at least 3% for nearly four consecutive years.

Consumer spending, say the wiseacres, accounts for 70% of the American economy.

Into this hazardous mix the Federal Reserve is raising interest rates.

Given the length of the current expansion, it seems the economy will come to rough business soon or late.

The American worker forms the great center of the country.

And the center appears to be giving way.

When at last “things fall apart”…

Will the center hold?