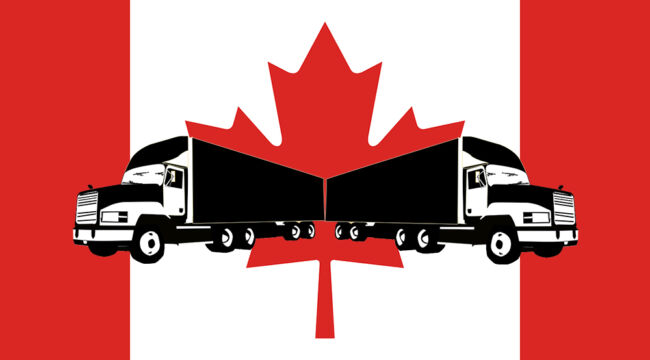 I’ve said it over and over again: History is a prankster. It can surprise you at the darndest times.

Who would have guessed that Canada, demure, inoffensive, shrinking violet among nations, would rise to lead a worldwide revolt against the Satanic dominion of digital neo-Bolshevism?

I’m talking about the Canadian truckers’ protest against the pernicious mandates.

Yes, the meek Canadians are standing up against the mass psychosis that’s swept Western civilization. The one that seeks to destroy every constitutional liberty; deprive citizens of life, property and even language; and reduce every individual to an internet-surveilled and controlled automaton.

Well, now it has happened, and the head of Canada’s government, Justin Trudeau — arguably the most foolish would-be tyrant in the former “Free World” — has finally emerged from his hidey-hole where he’d been recovering from the virus — to denounce the truckers as racist, white supremacist enemies of democracy.

He was triple-vaxxed but he got the virus anyway. Of course, he insists everyone else be fully vaxxed also — so that they don’t catch or spread the virus. Can you say, “cognitive dissonance”? How about a little self-awareness, Mr. Trudeau?

It’s rumored that the Canadian military told Mr. Trudeau in plain un-woke Canadian English to eff-off. They will not take orders to put down the truckers’ protest, and even the Mounties are wobbling, so it’s left to the Ottawa police, who threaten to arrest anyone aiding the truckers with food, water and fuel.

Wait and see how quickly that will turn to fighting in the streets. Constitutional crisis, ay? But let’s look beyond Canada…

Progress, but Not Enough

A dozen or so other members of the Western Civ Club of Nations are ditching their COVID-19 mandates and restrictions. The reason: Despite the mighty forces of deliberate organized propaganda and resulting mass delusion, the COVID-19 “vaccines” are finally revealed as an epic fail.

Not only do they not stop you from getting or passing along the virus, but they’re a potential danger to all who submitted to them. They’re an insult to the age-old accumulated intelligence of the human race as used to be represented by science, ethics and law.

And still, America’s own “leader,” the empty suit known as “Joe Biden,” has the temerity to go on TV and once again tell his hapless people to “get vaccinated… get your kids vaccinated!”

Who does he think he’s speaking to? The counter-information to Tony Fauci’s criminal BS is flooding the zone, despite America’s sinister Intel Community attempting to control the discredited legacy news media.

Just last week CBS’ 60 Minutes told its audience that our hospitals are overwhelmed by the unvaccinated with COVID, which is an outright lie. Maybe we should start asking: Who are the individual producers and network executives responsible for this unadulterated mendacity?

Would it be interesting to see them in a court of law, having to answer whether they believe their own lies? Or is someone telling them to sell them?

Have a look at the list of serious side effects the vaccines have caused:

Starting to get the picture? Of course, the vaccine fanatics try to write it all off as coincidence. Do you believe them? Why would anyone at this point?

This is not the first time the nation has learned about vaccine injuries — the CDC’s VAERS registry has reported massive problems with the Moderna, Pfizer and Johnson & Johnson “vaccines” since early summer of 2021. (In fact, adverse events are notoriously under-reported by perhaps 100 times.)

Now the FDA has gone and issued a full approval of the Moderna vaccine, without convening the customary expert advisory panel. The documents explaining the FDA’s decision were scrubbed from the FDA’s website.

The FDA spox responded to questions about it saying, “We are aware of the issue and hope to have the document reposted as soon as possible.” So far, the docs are still missing in action.

The primary objective of this approval seems to be adding the Moderna mRNA vax to the protocol for children, which would permit the disabling and murder of millions of innocents.

This is exactly what “Joe Biden” is calling for. And by the way, adding it to the children’s vaccine schedule supposedly continues Moderna’s shield of immunity from lawsuits. Just remember: In law, fraud vitiates that protection.

“The Disillusionment Will Be Cosmic”

We now enter a period of danger as the sleepwalkers of America awaken from their induced consensus trance and begin to understand how they were harmed, swindled and robbed by a corrupt, criminal officialdom.

It will hurt badly because the public wanted so desperately to believe that vaccines would make them safe from the mysteriously conjured COVID-19 virus — and, more than that, would cure their gnawing anxiety over the wreckage of American life caused by what appears to be leadership hostage to sinister forces.

I must say, I believe the truth of our predicament will grow a whole lot weirder as we stumble into springtime. The weirdest part of all will be when America learns exactly who and what have been the prime generators of our disorder.

The disillusionment will be cosmic.