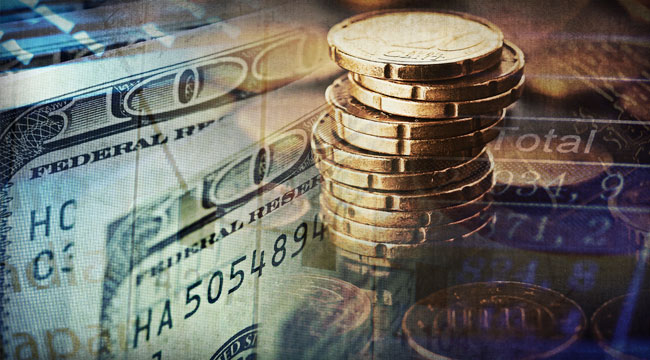 In short, the cybercurrency darling Bitcoin had a MAJOR setback. We’ll cover some of the important details today — plus, we’ll take a look at a safer place to stock your money than the latest currency du jour.

According to CNN Money, “The Bitcoin trading website Mt. Gox was taken offline late Monday, putting at risk millions of dollars put there by investors who gambled on the digital currency.”

As of this morning, Mt. Gox filed for bankruptcy protection in Japan where it was headquartered. All together it’s estimated the exchange lost half a billion dollars worth of the digital currency.

But over the past few weeks, life at Mt. Gox got tough. An alleged hacking scandal and now the overnight shutdown of the market have ravaged Bitcoin holders.

“To be perfectly blunt, Bitcoin always struck me as an overambitious ship awaiting its iceberg.”

To continue our analogy, it’s as if the whole NYSE market shut down overnight and stockholders were left holding nothing.

According to The Associated Press, “At the Tokyo office tower housing Mt. Gox, Bitcoin trader Kolin Burges said he had picketed the building since Feb. 14 after flying in from London, hoping to get back $320,000 he has tied up in Bitcoins with Mt. Gox.”

You see, apparently, when folks have hundreds, thousands and even hundreds of thousands of dollars tied up in your cybercurrency, it’s helpful not to close up shop overnight and essentially admit that everyone’s money is gone. But that’s what happened this week at Mt. Gox.

I certainly do feel bad for anyone that got bit by the Bitcoin bug. I guess the idea of a supreme digital currency that “won’t” be devalued isn’t as good as it’s cracked up to be.

But what’s worse? Being the market that shut down or being the sucker who put $320,000 into a magical cybercurrency backed by nothing more than hype and pipe dreams.

Indeed, the devil is in the details.

First off, let’s get something straight. Bitcoin is not a currency. Not by our definition.

The main duty of a currency is to be a medium of exchange, a holder of wealth.

… It needs to be liquid, easy to transfer, spend and receive.

… It needs to be trusted and reliable.

… It needs to be stable.

When you add it up, Bitcoin doesn’t tick any of the boxes above.

Bitcoin isn’t liquid. Other than trading in and out of U.S. dollars and some fluky usability with places like Overstock.com, users aren’t really able to buy anything with Bitcoins. You can’t buy a hot dog or pay your taxes with it. It’s a fantasy currency.

Bitcoin isn’t trustworthy. Heh… gee, you mean to tell me that an online currency that trades on clandestine markets in Tokyo and for all intents and purposes is cloaked in mystery isn’t trustworthy?! Say it ain’t so!

Bitcoin isn’t stable. Throughout the cybercurrency’s life, Bitcoin has never been stable. Heck, that’s how it got most of its notoriety! “Whoa, did you see how much Bitcoin went up yesterday,” said the gawkers. But you and I know that a true, stable currency isn’t going to be making huge gains or loses every day. That’s the point. A currency should be stable…and Bitcoin has never been.

“The demise of Bitcoin highlights the danger of placing one’s faith — and risking one’s wealth — in a ‘currency’ that dates back all of a thousand days or so, versus 5,000 years, or even a mere 222 years in the case of the U.S. dollar,” says Byron King.

Indeed, Byron has never officially commented on Bitcoin’s existence until today. But once prompted, he gave some valuable insight…

“Bitcoin proves the point that a good currency is hard to find, let alone conjure out of thin air. And a hard currency that withstands the test of time is even more difficult to locate, now or looking back across the arc of history.

“As Bitcoin fast fades, I cannot afford to dwell, like some weepy Confederate, over a lost cause. I simply return my gaze to the U.S. dollar, which, to be sure, we often slam these days due to its horrid mismanagement by the foolish political authorities and flat-Earth advisers that dominate our era.

“Yet for all its flaws… our U.S. dollar is a highly evolved example of successful natural monetary selection over many centuries. The dollar has prevailed in a very brutal world, while elsewhere entire empires have come and gone. That should count for something.

“For all the current problems of the dollar, Bitcoin was not the answer… To be perfectly blunt, Bitcoin always struck me as an overambitious ship awaiting its iceberg.

“Now, looking ahead to far horizons… the holds of our respective ships are filled with dollars, although the ballast near the keel of my hull, at least, is formed of real gold and silver.

Just as quick as Byron emailed his first words on Bitcoin, the wannabe currency may fall to the bottom of the sea.

Longtime readers know the value of a hard currency and the value of protecting your wealth with things of real value — no “vaporware” here, as Byron says.

No. You won’t find newfangled currencies on our radar. But you will find opportunities in hard assets — gold, silver, platinum, oil, gas and more. A metal miner that brings vital commodities to the market – gold for jewelry, silver for electronics, platinum for the auto industry. Or an oil and gas driller that brings energy to the surface – fueling cars, homes and industry.

Resource companies and their shares are a currency in their own right. As these producers continue to pull coveted resources from the ground they’ll continue to cash in. As time passes and currencies come and go, we’ll stick with a similar strategy.