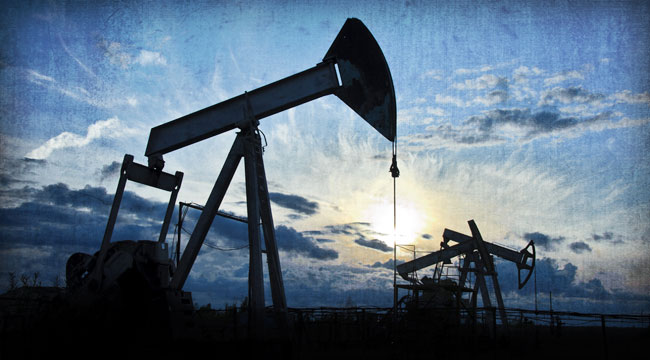 Buy the Dips: Why the Pullback in US Shale is Only Temporary

Harold Hamm, the “father of the frack boom” along with a few other determined oilmen, pioneered the technology and know-how needed to crack energy-filled shale formations, like North Dakota’s Bakken. Today the Bakken produces more than one million barrels per day.

Back in May, Hamm donned the cover of Forbes Magazine, under the title “The Man Fueling America’s Future.”

Well, if you’ve seen the news over the past few weeks you’ll know that Hamm may very well find himself on the cover of an altogether different magazine… (think: National Enquirer, or the other rags you see when you buy your milk and bread at the grocery store checkout line.)

…Hamm is considered the father of the fracking boom. And he didn’t get that distinction by sitting around and rolling dice.

Hamm is going through what could be the most costly divorce settlement in history. To the tune of $4-10 billion.

Here at the Daily Reckoning, we’re not going to go down the same road as those grocery store rags.

According to MarketWatch, the case will come down to “one key question: Did Hamm reach this level of wealth by luck or did he pour his heart and soul into building his fortune.”

To maintain much of his $20 billion net worth, Hamm will have to prove that his accelerating wealth, and that of his company Continental Resources, came from “passive” asset growth. Because in the legal world the difference between passive and active asset growth can dictate just how large of a cut his ex-wife will get (the more passive/lucky his growth, the less he’ll have to fork over.)

You see, I have a feeling it’s going to be hard for Hamm to prove that his company’s wealth and asset growth came from mere good fortune. As I mentioned above, Hamm is considered the father of the fracking boom. And he didn’t get that distinction by sitting around and rolling dice.

Unfortunately, if the divorce comes down to “luck” or “skill” — Mr. Hamm may be part of the biggest divorce settlement in history. That could be a bad day for his wallet.

Luck is on our side, though.

As American investors, Hamm’s fracking boom holds lots of future promise for us. Hard work in the oil patch over the past few decades is setting up for what I believe to be the biggest moneymaking opportunity in a generation.

It’s an investment term that simply implies you should buy on short-term pullbacks, in an effort to get respectable entry prices while riding the longer-term uptrend.

It’s kind of a loaded phrase, though, since you have to know the difference between a “dip” and a market meltdown… because no one would be happy about buying the first “dip” in August of 2008.

But that’s why I muddy my boots to stay ahead of the trends.

Remember, the fracking boom here in America has immense upside — no “luck” needed.

Over the past few weeks we’ve seen a fairly sharp pullback in the prices of most major U.S. shale players.

And I’m talking about the cream of the crop here – Pioneer Natural Resources, EOG Resources, Oasis Petroleum, Noble Energy. All of these companies are down some 10% since early July.

With massive amounts of black crude oil flowing in North Dakota, Texas and Colorado, this 10% pullback is nothing more than a short-term dip.

The three companies listed above are long-term buys, and if you’re interested in buying shares when they’re on sale, then today is your blue light special. “Attention Shale Store Shoppers!”

Remember, the fracking boom here in America has immense upside — no “luck” needed.

According to Phani Gadde, a senior analyst for Wood Mackenzie, “tight oil isn’t marginal anymore.” We’re seeing break even prices for shale plays in the $40-60 range, he told a sparse crowd in Houston a few weeks ago.

With oil prices still well above the $90 range shale players are making money.

And I don’t have to be the first to tell you that the next time the Middle East goes to hell in a handbasket, and oil prices head well above $100 a barrel, well-run shale players are going to scream towards new highs.

P.S. With new highs coming, I’d much rather buy the dips. And I have plenty of plays in mind to do just that. Readers of today’s issue of The Daily Reckoning got a unique opportunity to discover them first-hand. Don’t miss out on your chance to discover future investment opportunities like this one. Sign up for The Daily Reckoning email edition, for FREE, right here.