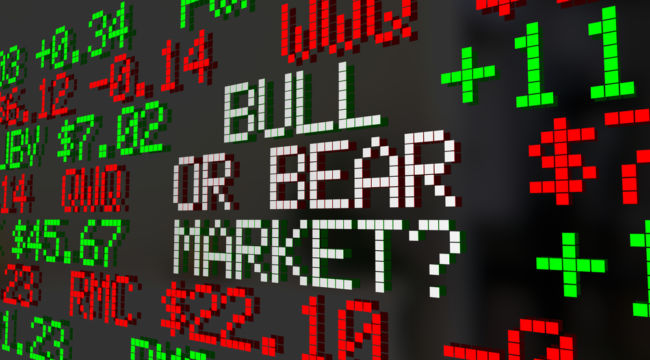 After “the sharpest rally since the global financial crisis recovery” — Goldman’s phrase — has the stock market peaked for the year?

Today we weigh the evidence… and hazard a conclusion.

The major averages jumped over 20% from their Christmas Eve bottoms.

The Dow Jones catapulted over 4,000 points valley to peak.

“The bull is back,” gloated the financial press. “The bears are back in hibernation,” they exulted, putting out their tongues at skeptics.

But as the sage Lao Tzu warned:

The light that burns twice as bright burns half as long.

This light is flickering… and fading.

Today the major averages posted losses for the fourth consecutive session — their worst span since December.

The Dow Jones gave back another 200 points today.

Was the historic bounce a mere spasm of a dying beast — a “bear market rally”?

Rallies in excess of 20% during bear markets are hardly unprecedented. In each of the 2000–2002 and 2007–09 bear markets, for example, both the S&P 500 and the Nasdaq Composite rallied by more than they have recently — only to eventually succumb to the bear market that remained in force.

During the bear market that lasted from March 2000–October 2002, for example, the S&P 500 experienced a rally in which it rose 21%; in its biggest rally during the October 2007–March 2009 bear market it gained 24%. Both rallies were larger than the one this benchmark has experienced since its Christmas Eve low.

Morgan Stanley subscribes to the bear rally theory. It has been “selling the rally” — not buying.

Returning to Goldman, its analysts believe the market’s recent highs could well be the year’s highs.

It appears there is justice here.

Before its recent slippage, the S&P was already up some 15% on the year.

A 15% annual gain for the S&P is pretty handsome.

Its average annualized return stretching 90 years is a workmanlike but unspectacular 9.8%.

And over the past 20 years?

You may wobble at the answer:

But these years we find at the margin, far beyond the general.

If the S&P can scratch out a 15% gain this year, it would be a job jolly well done.

Especially, that is, in context of unfurling economic conditions.

As we have documented to the verge of exhaustion, growth is winding to a halt.

Debt delinquencies are at unprecedented levels, bankruptcies are soaring, retail stores are closing at a record pace; this is the worst economy for farmers since the early 1980s, exports are plummeting and a brand-new real estate crisis has now begun.

Meantime, unemployment is beginning to slink higher… like a choking vine.

Why else would it suddenly transition to “patience”?

Before December’s near-bear market Jerome Powell was implacably and resolutely determined to raise interest rates and hack the balance sheet.

But the market read him a severe lesson… and Mr. Powell saw the light.

The combined effects of previous rate hikes and balance sheet gougings may finally be working their mischief.

Powell could cut rates once again — fed funds futures suggest a nearly 20% chance of a rate cut by next January.

Like Custer at Little Bighorn, reinforcements would not arrive in time.

And as we have explained previously, recession almost always follows the first rate cut after a hiking cycle.

By then… it is too late.

We cannot be certain recession will come calling this year.

But we hazard the stock market will not end 2019 much above its recent highs — if it ends 2019 higher at all.