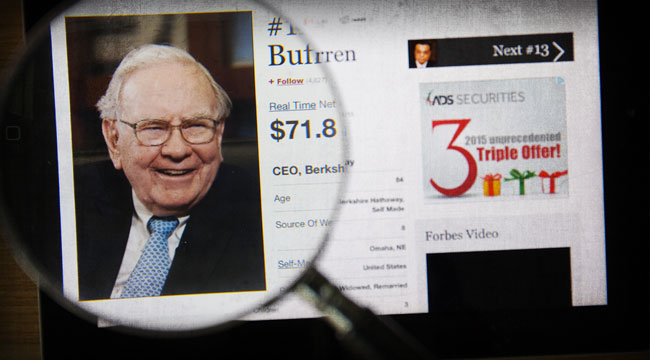 Buffett Takes a Page From the “Inflation King’s” Playbook

Hugo Stinnes is practically unknown today, but this was not always the case.

In the early 1920s, he was the wealthiest man in Germany, at a time when the country was the world’s third largest economy. He was a prominent industrialist and investor with diverse holdings in Germany and abroad.

Chancellors and Cabinet ministers of the newly formed Weimar Republic routinely sought his advice on economic and political problems. In many ways, Stinnes played a role in Germany similar to the role Warren Buffett plays in the U.S. today.

He was an ultra-wealthy investor whose opinion was eagerly sought on important political matters, who exercised powerful behind the-scenes influence and who seemed to make all the right moves when it came to playing markets.

If you’re a student of economic history, you know that from 1922–1923 Germany suffered the worst hyperinflation experienced by a major industrial economy in modern times. The exchange rate between the German paper currency, the reichsmark, and the dollar went from 208 to 1 in early 1921 to 4.2 trillion to 1 in late 1923.

At that point, the reichsmark became worthless and was swept down sewers as litter. Yet Stinnes was not wiped out during this hyperinflation. Why was that?

Stinnes was born in 1870 into a prosperous German family that had interests in coal mining. He worked in mines to obtain a practical working knowledge of the industry and took courses in Berlin at the Academy of Mining.

Later, he inherited his family’s business and expanded it by buying his own mines. Then he diversified into shipping, buying cargo lines. His own vessels were used to transport his coal within Germany along the Rhine River and from his mines abroad. His vessels also carried lumber and grains. His diversification included ownership of a leading newspaper, which he used to exert political influence.

Prior to the Weimar hyperinflation, Stinnes borrowed vast sums of money in reichsmarks. When the hyperinflation hit, Stinnes was perfectly positioned. The coal, steel and shipping retained their value.

It didn’t matter what happened to the German currency, a hard asset is still a hard asset and does not go away even if the currency goes to zero. Stinnes’ international holdings also served him well because they produced profits in hard currencies, not worthless reichsmarks. Some of these profits were kept offshore in the form of gold held in Swiss vaults.

That way he could escape both hyperinflation and German taxation. Finally, he repaid his debts in worthless reichsmarks, making them disappear. Not only was Stinnes not harmed by the Weimar hyperinflation, but his empire prospered and he made more money than ever.

He expanded his holdings and bought out bankrupt competitors. Stinnes made so much money during the Weimar hyperinflation that his German nickname was Inflationskönig, which means Inflation King. When the dust settled and Germany returned to a new gold-backed currency, Stinnes was one of the richest men in the world, while the German middle classes were destroyed.

It appears that Buffett has studied Stinnes carefully and is preparing for the same calamity that Stinnes saw — hyperinflation. Buffett recently purchased major transportation assets in the form of the Burlington Northern Santa Fe Railroad.

Buffett can now move his Suncor oil on his Burlington Northern railroad in exactly the same way that Stinnes moved his coal on his own ships in 1923.

For decades, Buffett also owned one of the most powerful newspapers in the U.S.: The Washington Post. He sold that stake recently to Jeff Bezos of Amazon, but still retains communications assets. He’s also purchased large offshore assets in China and elsewhere that produce nondollar profits that can be retained offshore tax-free.

A huge part of Buffett’s portfolio is in financial stocks — particularly in banks and insurance companies — that are highly leveraged borrowers. Like Stinnes in the 1920s, Buffett can profit when the liabilities of these financial giants are wiped out by inflation, while they nimbly redeploy assets to hedge their own exposures.

In short, Buffett is borrowing from the Stinnes playbook. He’s using leverage to diversify into hard assets in energy, transportation and foreign currencies. He’s using his communications assets and prestige to stay informed on behind-the-scenes developments on the political landscape. Buffett is now positioned in much the same way that Stinnes was positioned in 1922.

If hyperinflation were to slam the U.S. today, Buffett’s results would be the same as Stinnes’. His hard assets would explode in value, his debts would be eliminated and he would be in a position to buy out bankrupt competitors. Of course, the middle classes in the U.S. would be wiped out, as they were in Germany.

My advice to you when it comes to billionaires like Buffett is to watch what they do, not what they say. Stinnes saw the German hyperinflation coming and positioned accordingly.

Buffett is following the Stinnes playbook. Perhaps Buffett sees the same hyperinflation in our future. It’s not too late for you to take some of the same precautions as Stinnes and Buffett.