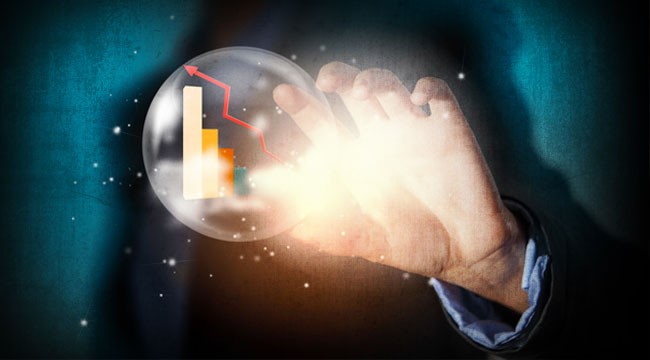 Bubble Time on Wall Street, Same as It Ever Was

We all know that, from time to time, some sectors of the economy begin to expand rapidly and become an object of speculation (tulips, new territories such as the South Seas, the Mississippi concession, land, canals, railroads, mines, oil, new technologies and inventions, stamps, art, precious metals, etc.).

If monetary conditions are expansionary, it is likely that each boom will last longer and will be magnified, because entrepreneurs and speculators will borrow money in order to capitalise on the new profit opportunity.

There is basically nothing wrong with a boom driven by easy money, because, sooner or later, the supply will catch up with the demand and lead to declining prices (deflation), which will eliminate the weaker and less efficient suppliers (producers) and enlarge the market potential (demand) through lower prices.

The other day, I came across a statistic showing global tablet shipments. 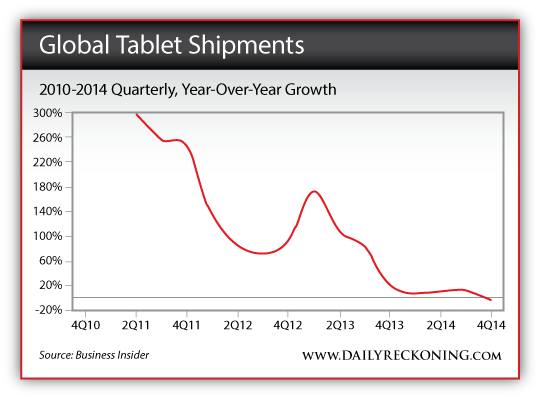 Now, imagine that the entire economy consisted only of tablets and that the demand for tablets was contracting and tablet prices were declining. Neo-Keynesians would argue that the government could boost demand with fiscal measures: the government could buy all the oversupply of tablets every year and just bury them somewhere. (Communist countries regularly used these policies.)

Paul Krugman would have an even better growth-stimulating policy: the government would buy all the excess supplies of tablets and immediately destroy them in huge factories that would employ a large number of workers who would sit around doing nothing (just like government employees), but which would require enormous energy and pollution control installations that would need constant supervision by a few hundred different government agencies.

Ideally, these facilities would be destroyed annually by extraterrestrials.

Krugman would rejoice, because new tablet destruction facilities would have to be built annually, which would ensure continuous economic growth (or, in the opinion of pseudo-economists like myself, complete waste). Also, the government could support tablet prices at an artificially high level through price fixing measures combined with zero or negative interest rates.

Finally, through legislation, the government could force every household to buy a new tablet every month. But, clearly, none of these measures would be economically desirable; and, most importantly, none of them would prevent the prices of tablets from crashing by far more than they would have had the government not intervened with its fiscal and monetary policies at all.

Without government interventions, a large number of producers would have been eliminated as soon as growth slowed down. Thus, supplies would soon have been cut, and tablet prices would have stabilised at an equilibrium price that would have been determined by the free market (demand and supply).

There is a further point to consider: the intensity of the tablet boom (like every other boom) depends, to a large extent, on credit conditions.

If credit conditions are extremely expansionary, or if the government subsidises people to enter the tablet business (or to buy tablets) with fiscal policies (say, with Obama loans that never need to be paid back), which Neo-Keynesians would be advocating as growth-stimulating measures, then every Tom, Dick, and Harry would borrow money or issue shares to the public in order to build tablet manufacturing facilities.

I am aware that the economy doesn’t consist only of one giant tablet market. But my point is that, when fiscal and monetary interventions prevent swift adjustments of market conditions through the free price mechanism, “rolling depressions” spread from one sector of the economy to another.

The latest victim of these rolling depressions is the oil and gas industry. It was inevitable that oil prices would rise from their lows in the late 1990s, as the incremental demand from China pushed up the extremely depressed prices. Easy money led to a commodities bubble in the first half of 2008 (although global demand was already coming down). 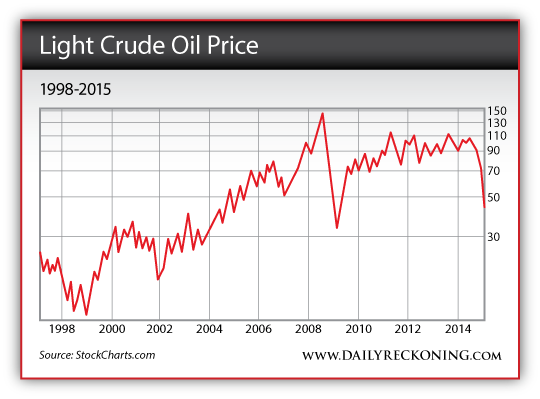 Subsequently, oil prices (and the prices of other industrial commodities) collapsed in the second half of 2008. But expansionary fiscal and monetary conditions all over the world led to a sharp oil price recovery, which in turn fuelled a colossal expansion of oil and gas exploration, and a significant increase in production.

Eventually, however, the high prices led to overproduction and less consumption: Therefore, prices collapsed after the summer of 2014.

Above, we have seen that the bigger the boom — whether for tablets, oil, or other inflated assets — and the longer it lasts, the more severe the subsequent bust will be, irrespective of any government interventions aimed at supporting that market. 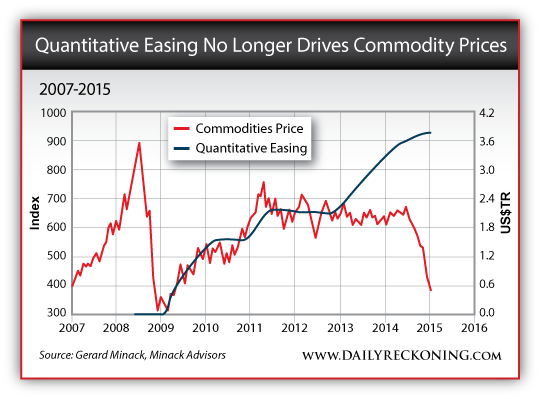 My friend Gerard Minack recently produced a figure which shows how quantitative easing by the Fed led to a temporary rebound in commodity prices after the 2008 slump. However, suddenly, the correlation no longer worked. The Fed’s balance sheet continued to expand, but commodity prices stalled and then collapsed.

I believe that, one after the other, governments’ interventions with fiscal and monetary policies will fail badly, leaving behind a trail of serious deflationary sectorial busts (NASDAQ, housing, commodities, etc.).

I suspect that the last big bust will take place in the inflated financial markets.