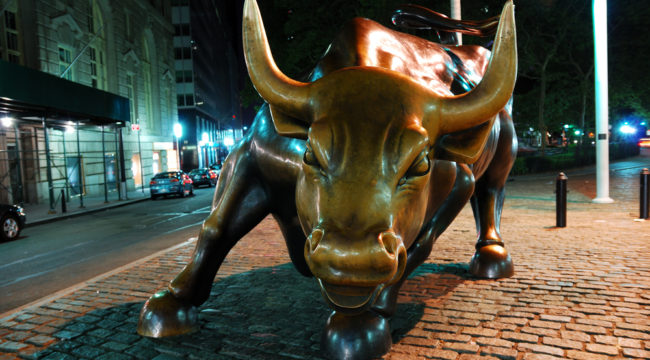 This Bond Bull Isn’t Dead Yet

“The bond bull market is over!” How many times have you heard that in the past six months? The past year? Or, for that matter, the past five years?

Time and again, the bond bears have declared the bull market over. They just can’t believe U.S. rates can possibly go lower. Time and again the bears have been proved wrong, and the bond market rally continues.

We may be on the brink of another reversal in temporary bear market conditions. The bond market has been down for the last five months. As bond yields rise, bond prices fall (and vice-versa).

Yields to maturity on benchmark ten-year Treasury notes have backed-up over a full percentage point since their record low of 1.36% in July 2016 shortly after the Brexit shock. They currently trade around 2.4%. This follows the recent high yield of 2.6% in December 2016 after the Trump election victory, and the “Trump Trade” that affected stocks, bonds and currencies.

The bears are unanimous that this breakout in yields — from 1.4% to 2.6% and resulting capital losses to bond holders — is the death-knell for the 35-year old secular bond bull market. Just to put that in perspective, the yield on ten-year Treasury notes hit an all-time high of 15.82% in September 1981.

Yields have tumbled, albeit with zigs and zags and nasty bear markets along the way, for the entire 35-year stretch since then. It’s not unreasonable to estimate that most of the bond traders on Wall Street weren’t even born when this secular bull market began in 1981.

At the 1.4% level reached last summer, it seemed that yields just could not get any lower. Just about all market participants, young and old, were ready to write “RIP” on the bull market, and brace for a new secular bear. Market behavior since then has supported that view.

Hedge funds and leveraged players look trapped in a massively leveraged short position. They are being set up for slaughter by the real money accounts.

What are the bears missing? The most important thing they are missing is that rates are really not that low to begin with. It’s true that nominal rates have been low, but real rates are nowhere near their all-time lows due to the impact of inflation.

This simple concept of real versus nominal rates is not discussed much on financial TV or blogs, but it’s a crucial distinction. Simply put, interest rates are still high today and could fall a lot lower.

Another concept missed by the bond bears is velocity. That refers to the turnover of money. It’s also easy to understand. If I have a dollar, go to dinner, tip the waiter, and the waiter takes a taxi home, and the taxi driver buys gasoline, my dollar has velocity of three in the tip, the taxi fare, and the gasoline (1 + 1+ 1 = 3). If I stay home, watch TV, and leave my money in the bank, my money has velocity of zero since it was never spent.

It’s true that the Fed has expanded the money supply enormously since the 2008 crisis. But guess what? Velocity is sinking like a stone. In fact, velocity has been plunging since the 1998 financial crisis due to demographics and lost confidence in money as shown in the chart below. 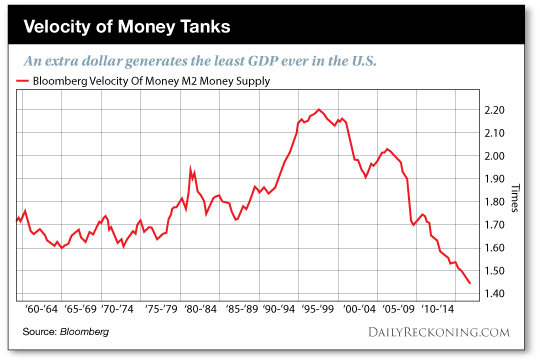 The math is inescapable. If M0 (base money) is $4 trillion and V is zero, then the economy has disappeared; the gross nominal GDP would be zero ($4T x 0 = 0). Of course, that won’t happen (with 0 nominal GDP, we’d all be living in a new Stone Age), but the extreme example makes the point that as long as velocity is plunging, there’s no inflation. And without inflation, real rates will remain high even at very low nominal rates.

Indeed, this is precisely the situation that has plagued Japan for decades and appeared in Europe recently. It may be coming to the U.S. also.

The recent back-up in yields looks just like the yield increases in 2013 before they hit a peak and fell sharply.

What are the reasons for believing that yields actually will decline again as they did in 2014? And why should investors expect a new bond market rally even in the midst of the secular bull market?

With the ingredients for lower rates and a bond market rally in place, the most straightforward trade is to go long ten-year Treasury notes.

The problem there is that the Treasury market looks like the Gunfight at the OK Corral. On one side are hedge funds and leveraged players who are massively short bonds. On the other side are real money players like banks and institutions who see what we see.

One side is going to lose big (my view is it will be the hedge funds again), but there could be huge volatility and violent countertrends as the two sides fight it out.