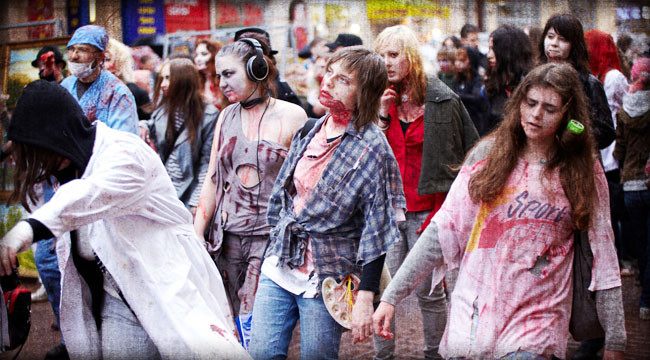 Bloody Scenes from the Next Episode of Economic Crisis

After the gas attack on rebel areas of Damascus by the increasingly desperate Syrian regime, a military response led by the U.S. looks very likely. It will only add to the instability of the Middle East this autumn that is already heightened by the army coup in Egypt and the widespread suppression of the Muslim Brotherhood. Libya remains an anarchic place, with oil production down 80%. These are the facts of life for investors, whichever side you sit on.

In 2008, it was the high oil prices of July — when prices hit an all-time high of $147 a barrel — that tipped the world economy into the global economic crisis of that autumn. Financial markets are riding ridiculously high for the economic outlook again now. They have so far failed to wake up to the reality of higher U.S. interest rates. The surge in U.S. interest rates over the summer is badly impacting new home sales and industrial orders.

Higher interest rates are a tax on any economy, and that is what the U.S. has gotten over the summer while many folks were on holiday. “The interest rate on a 30-year fixed home loan climbed to 4.58% in the week ended Aug. 22, according to data compiled by Freddie Mac… [It] rose from a record-low 3.31% in November and posted its biggest-ever quarterly gain of 25% from April to June,” says a Bloomberg article.

No surprise, then, that orders for durable goods dropped in July by the most in almost a year. Orders fell 7.3%, “the first decrease in four months and the biggest since August 2012,” says Bloomberg. “The retreat was broad-based, with demand excluding the volatile transportation category unexpectedly falling.”

Then again, sales of new single-family homes in the United States fell sharply in July to their lowest level in nine months. Sales dropped 13.4% to an annual rate of 394,000 units. That was lower than any prediction by the 72 economists surveyed by Bloomberg. The Economic Cycle Research Institute already has the U.S. back in recession.

How long will it take a bullish stock market to realize that the U.S. recovery is dead? For the moment, the bad July data can be seen as something good for the market because they will encourage the Fed to keep on printing money. Still, that hardly matters now that interest rates are on the way up, does it? Investors don’t seem to have quite twigged that yet. The Fed has lost control of interest rates. Mamma mia! That is an important development.

However, perhaps it will take a good old-fashioned Middle East oil price spike to prick the stock market bubble. Intervention in Syria, whatever that might or might not achieve in humanitarian terms apart from raining more bombs on the hapless Syrian public, will certainly do the trick on Wall Street.

Stand by for round two of the global economic crisis, coming soon to a screen near you. It’s going to be as bloody and chaotic as the scenes on your TV from Cairo and Damascus. Yet, as ever, the chorus on Wall Street manages to keep a straight face and sing the same tune while robbing investors blind. Just listen to them on Bloomberg or CNBC and you would think the Fed has this all under control and the U.S. economy is recovering.

Now, admittedly, economists are all facing the wrong way too. There is hardly a man or woman willing to stick their neck out and say the inflation-distorted figures that purport to show a recovery are turning in the opposite direction. That said, we can point to a legion of contrarian investors telling the story as it really is — from Marc Faber to Chris Mayer to Jim Rogers and many more. There will be plenty of people who again will wish that they had listened to these wise voices who also got it right in 2008.

Instead, the lemmings head again for the cliff, totally convinced by their collective myopia that only good times lie in store. How overvalued do U.S. stocks have to become for them to realize the folly of their ways? Record margin debt shows that people have never borrowed more in history to push up stock prices. Record stock buybacks by public companies show an equal folly, although if they have financed that by issuing fixed-coupon corporate bonds, then they have been correctly contrarian in their thinking too. 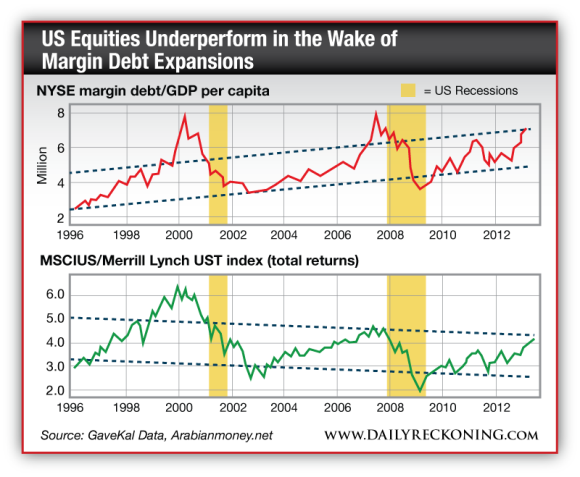 Still, we are set up for one almighty crash on Wall Street this autumn as the fools cash out at just the wrong time or, more likely, because their own financial stupidity leaves them with no option. This time, the Fed will not be there to rescue everybody. Such will be the scale of the disaster that only the chosen few will be rescued this time round.

The last global financial crisis actually had surprisingly few casualties, as the regime of low interest rates kept zombie companies alive far beyond their natural life spans. They are all going to crumble in a heap this time. The debts are simply too big. There is no way for the Fed to print this much money fast enough, although it will doubtless try. Inflation is probably still a better disease to suffer, though, than the deflation that will undoubtedly be the first effect of such a financial crash.

Many will lose their jobs in a rolling crisis. Whole financial institutions will melt away along with all the money invested in them. Cyprus set the precedent of what to expect. Investments without a counter party will rise to a premium, and that means gold and silver, the traditional safe havens. Central bankers will no longer be able to manipulate their prices down, as the futures market will be replaced by physical metal exchanges as the price-setting mechanism.

Amid this awful mess will be some generational asset-buying opportunities, provided that you have protected your wealth in real assets and not entrusted it to some dodgy financial institution with an army of expensive staff to pay and a palatial headquarters.

Peter Cooper
for The Daily Reckoning

Ed. Note: Bracing yourself from the coming global economic crisis can be tricky. But if you’re a subscriber to The Daily Reckoning email, you’ve already received several opportunities to better weather the coming storm. If you’re not currently receiving The Daily Reckoning email edition, you’re missing out on numerous ways to find out just what to do in the face of the coming crisis. Sign up for free, right here, and start preserving your wealth today.

Arabianmoney.net editor and publisher Peter Cooper is based in the Dubai Media City, and has been working as a senior journalist in the region since 1996. He was then the founding editor of the Gulf Business, the first-ever business magazine published in Dubai. In the year 2000 he was a founding partner in the business news and information website ameinfo.com.