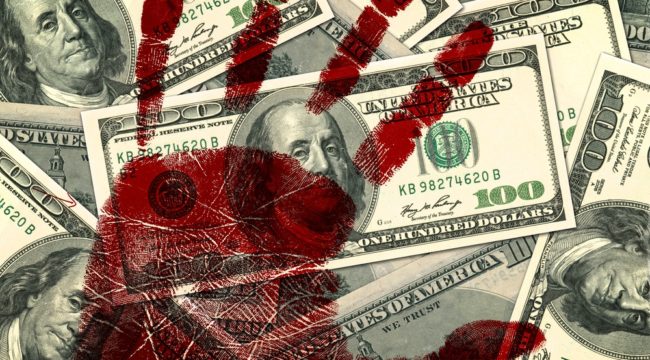 The Bloodsuckers Are Coming for Your Cash

In April, I warned my Trend Following subscribers this might happen…

And now it’s getting closer by the hour.

A monetary “Frankenstein” birthed by central bankers has broken free from its chains.

Many thought the monster would be contained to the eurozone and Japan.

But fast-moving developments show that its effects are now being felt in the U.K.

Now, it’s only a matter of time before the U.S is smacked upside the head WWE-style.

On Monday, more than 1.3 million Royal Bank of Scotland and Nat West commercial accountholders in the U.K. were notified that they may be hit with negative interest rates on their accounts.

That’s right… they’ll actually lose money by keeping a balance with those banks.

And that has U.K bank customers up in arms. They thought the perverse effects of negative rates were only for those poor saps in the EU and Japan, where it’s official policy.

But in our globalized world, bad ideas spread quickly. And the horror of NIRP has now spread to the Bank of England (BoE)…

Yesterday, influential BoE policymaker Martin Weale called for more interest rate cut stimulus. And an immediate move to negative has not been ruled out.

Banks like Royal Bank of Scotland and Nat West see the writing on the wall. So they’ve started covering their asses by warning their customers.

And when the BoE eventually does go negative, all U.K. banks will follow suit.

If you think this can’t happen in the U.S., you’re comatose.

Negative interest rates are on the Federal Reserve’s radar…

Fed chief Janet Yellen is on record saying, “We’re taking a look at them.”

And Fed member William Dudley says NIRP is “something that we would contemplate as a potential action.”

Translation: NIRP is on-deck when the next so-called “crisis” hits.

Rates in the U.S. are near zero. And the Fed declined to raise them on mere Brexit uncertainty.

It’s easy to imagine what Yellen will do with rates when a true crisis hits… like when big European banks fail… or when markets tank 50% on fears of France or Italy leaving leave the EU.

Let me be clear: NIRP is coming to the U.S. All it’s going to take for “operation steal your remaining cash” to unfold is the next shock to the system—real or contrived.

So what’s your plan of attack when everything you understand about money is turned so far upside down that you give up?

Stuff your money in your mattress?

Put it all in a home safe?

Put your savings in “buy and hold” stocks and hope and then pray for the system to take care of you?

Come on, the system wants you dead broke.

This is a historical redistribution plan – stealth style, of course.

But you have options.

You can invest money in a trend following system, allowing gains in the stock market while protecting against big downside moves.

Trend following also gives you a chance to make extra cash to avoid the NIRP penalty.

Remember, chaos is the new normal.

And the future will arrive in ways no one can predict.

It’s time you start thinking about how you’re going to prepare for times that will make you question our entire financial system.