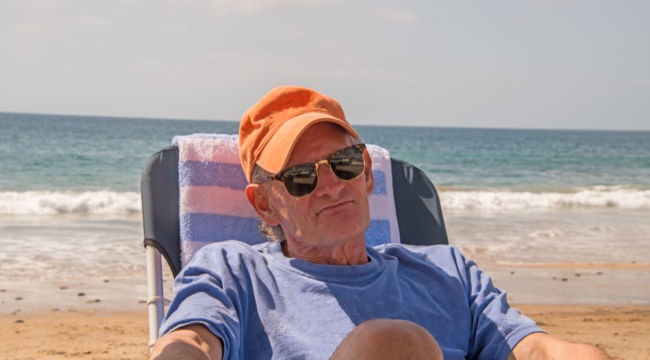 History will probably record that America’s Baby Boom generation threw one helluva party; Gen X was left with the sorry task of cleanup crew; and the Millennials ended up squatting in the repossessed haunted party-house when it was all over. On behalf of the Boomers, let me try to explain and apologize.

We came along at the end of history’s earlier biggest trauma, the Second World War, following the hard stumble of the Great Depression — which, by the way, for those of you unsure of chronology, followed the First World War, an epic, purposeless slaughter that utterly demoralized Western civilization. What a set-up for my parents’ generation.

My stepfather, the man who raised me, was an interesting, specimen of that gen. Fresh out of college in Boston, he joined the army, became a lieutenant, and by-and-by found himself trapped in the German offensive through the Ardennes Forest, known as the Battle of the Bulge.

Unlike some WW2 vets, he was willing to talk about his experiences. His most vivid memory was the difference between the sound of American and German machine guns. Ours went rat-a-tat-tat, theirs went zzzzzzzap, he said, like you couldn’t even detect the interval between the bullets coming at you. It scared the hell out of his men, not a few of whom were cut to pieces.

My stepfather merely caught several chunks of shrapnel in his arm and thigh, and was still on the scene when Germany finally surrendered in May, 1945. He was awarded a silver star for valor, but never bragged on it. (My mother barely participated in my upbringing, but that’s another story.)

He went straight to New York City when it was over. His gen’s victory dance was to get straight to work in the economic bonanza just revving up — because the war had happened elsewhere and all our stuff was intact, ready to re-start, to make and sell anything under the sun to the shattered rest-of-the-world, and lend them money to buy it — quite an opportunity for young men highly disciplined and regimented from their recent travails of war.

My stepfather became a classic Mad Man, as in the TV series, working in media, publishing, and PR, a hard-drinking cohort of mostly military vets who would knock down three martinis over lunch with clients (a nearly inconceivable feat, actually, when you think about it), but that showed what the war had done to the soldiers who survived.

He died from it at barely sixty, and from smoking two packs of Camel straights a day, another habit of battle.

We Boomer boys had his war as movies and comic books: Sergeant Rock and John Wayne on the beach at Iwo! We had all the fruits of that postwar bonanza. We had Disneyland, the 1964 World’s Fair, the Carousel-of-Progress, and Rock Around the Clock. We eventually had a war of our own, Vietnam, but it was optional for college kids.

I declined to go get my rear end shot off, of course.

You have no idea what a fantastic bacchanal college was in the 1960s unless you were there. Let the sunshine in!

The great anti-war protests gave us a chance to pretend we were serious, but, believe me, it was much more about finding someone to hook-up with at the teach-ins and the street marches.

The birth control pill was a fabulous novelty. We ignored the side-effects — especially the social side effects that led later on to an epidemic of divorces and broken families.

When you are a young man, sex is at least half of what you think of minute-by-minute. I was on a campus where all you saw were waves of nubile, joggling breasts coming at you beneath those sheer peasant blouses (which, you understand, suggests that the women were in on it, too, being every bit as incited by their own frisky hormones).

Personally, I was not altogether on board with the hippie program, though I let my hair grow. A lot about it gave me the creeps — the lurid posters of Hindu gods with elephant heads, the dumb-ass “Hey, man,” lingo, the neurotic sharing of everything from clothing to money, the wooly armpits, the ghastly organic cuisine.

I mostly eschewed drugs, never dropped acid, and smoked pot infrequently due to a chastening episode of frightening paranoia early on. Anyway, after Charlie Manson’s caper, the whole thing lost its luster and by the early 1970s there wasn’t much left but sideburns, and by then many of us were in an office of some kind.

Boomers Never Should Have Been Allowed Near Wall Street

Which is probably where things really went off the rails. The Boomers should never have been allowed in those offices, especially the ones within ten miles of Wall Street. That’s where the cleverest among us came up with the signal innovations that have now wrecked the world. The coronavirus is a very bad thing, for sure.

Nobody knows yet just how deeply the effects of coronavirus will cut through daily life in the weeks and months ahead. The potential for disorder isn’t tiny, looking at the current situation, at least in terms of broken business relationships and the flow of vital goods.

We’re the hunkering-in-place stage of the crisis. Be prepared for plenty of action when the hunkering ends and the hungering begins.

But as bad as it may turn out to be, it’s really nothing compared to the long-term, deliberate wickedness that engineered the so-called financialized economy — a supernatural matrix of something-for-nothing swindles and frauds that purported to replace actual work that produced things of value.

The great lesson of the age was lost: the virtual is not a substitute for the authentic.

Into the Black Hole

And now the Boomer geniuses of finance are scrambling frantically to hurl imaginary money into the black hole they have opened with their own reckless wizardry.

But black holes are nothing like ordinary holes. They are unfillable. They just suck everything into a cosmic vacuum that resembles something like death — which, in its implacable mystery, may just be a door to a new disposition of things, the next life, the next reality.

Of course, not all of us Boomers worked on Wall Street or in its annexes, but we did more or less go along with all that wickedness because we never really made any earnest effort to stop it. The Dodd-Frank bill? Don’t make me laugh.

Maybe it’s just impossible to apologize for the mess we left behind after the party we enjoyed.

I’m not a Christian in any formal sense, but perhaps only that kind of fathomless, unconditional forgiveness might avail. I am sincerely sorry.