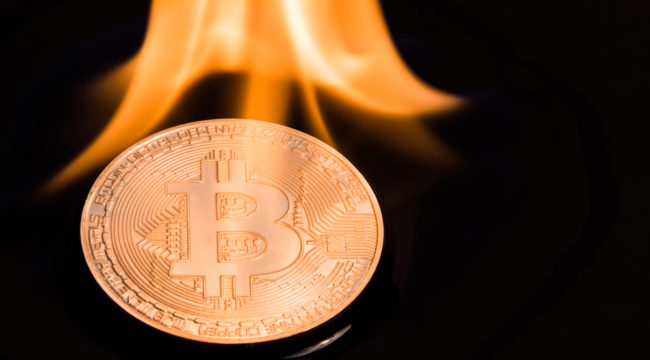 Is There a Bitcoin Bubble?

[Ed. Note: Jim Rickards’ latest New York Times bestseller, The Road to Ruin: The Global Elites’ Secret Plan for the Next Financial Crisis, is out now. Learn how to get your free copy – HERE. This vital book transcends rhetoric from the Fed and any threat of a bitcoin bubble to prepare you for what you should be watching now.]

Whether looking at one month, one year or two years, annualized or actual, these gains are breathtaking.

The answer to the bubble question is almost certainly, “yes” but, that tells us little about what’s driving the bubble or how long it might last.

It serves no purpose to assess Bitcoin based on “intrinsic value.” Bitcoin has no intrinsic value and neither does any other form of money including dollars or gold. Intrinsic value is an obsolete economic theory that was abandoned by economists in 1871. The phrase “intrinsic value” is bandied about frequently, but it is of no use in valuing Bitcoin.

That’s helpful, but “utility” can be a slippery concept. Sometimes utility is entirely practical (“I need a car to get to work to earn my pay, so the car has some utility I can value.”) But, sometimes utility is idiosyncratic, (“I get a rush from gambling so I’ll spend money in Las Vegas even though I know the odds are against me”).

Bitcoin certainly has some utility to some people. It is easy and inexpensive to make payments. It offers anonymity to those who value that (including criminals and terrorists). It is useful as a way to evade capital controls for those trapped in closed systems such as Cuba, North Korea or China. It can also be a lifesaver for refugees who are vulnerable to assault and confiscation as they flee from country-to-country.

Yet, there is little doubt that much of the price action in Bitcoin comes from the utility of a “get rich quick” or “something for nothing” mentality. Greed and the thrill of gambling have utility to some, and Bitcoin can certainly satisfy those needs and wants.

We pointed out above that the rise in the dollar price of Bitcoin can also be viewed as a collapse of the dollar if Bitcoin is a stable store of value and an acceptable numeraire. That’s because Bitcoin and dollars are both forms of money and their cross-rate is just a currency swap, not an investment.

The Bitcoin Bubble, Markets, and Gold

If Bitcoin is held constant, then the dollar has collapsed 75% against Bitcoin in 2017. What other evidence is there for a generalized collapse in the dollar? The answer is none.

Both gold and the euro have rallied this year, but only in the 10% to 20% range, nothing at all like the 1,540% annualized gains seen in Bitcoin recently. (If there were a generalized collapse of confidence in the dollar as evidenced by gold prices, Bitcoin would surely benefit, but for now, Bitcoin is the outlier).

In the absence of evidence from other markets that the dollar is collapsing generally, the seeming collapse of the dollar measured in Bitcoin appears detached from prosaic definitions of utility and therefore can only be explained by the utility of greed. That’s bad news for Bitcoin because the one recurring lesson from speculative markets is that greed can turn to fear overnight.

There are many examples of bubble dynamics in which hyperbolic price action in dollars, detached from other information about a dollar decline, reversed quickly in a catastrophic collapse. The action in the NASDAQ 100 index from 1996 to 2000 following the Netscape IPO is shown in the chart below is a helpful and somewhat recent example.

The 75% decline in NASDAQ after January 2000 is a good predictor of what will happen to the dollar price of Bitcoin once a catalyst changes greed to fear. Several of those catalysts are discussed below. Bitcoin at $200 or lower (about where it was when the most recent hyperbolic stage began) seems likely in the next two years. 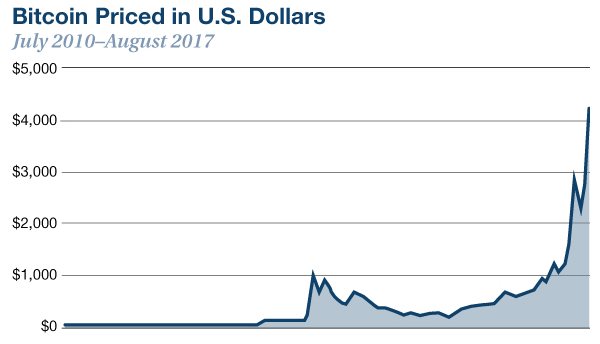 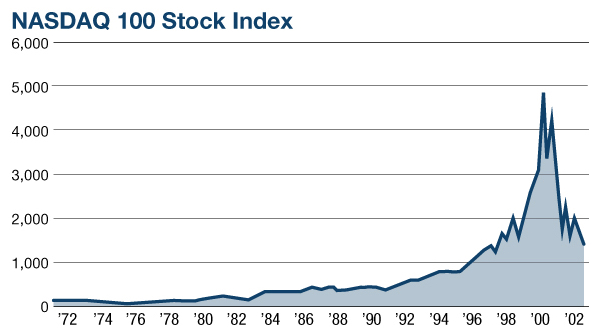 A tale of two charts. The top chart shows the price of Bitcoin in U.S. dollars from July 2010, close to the time Bitcoin was invented, until August 21, 2017. The lower chart shows the NASDAQ 100 Index from its invention in 1971 until January 2002. The NASDAQ chart vividly displays the bubble mania of the dot.com era from 1996 to 2000. What matters in these charts are not the specific dates or index metrics, but rather the bubble dynamic displayed in the hyperbolic phase of the curve. Will Bitcoin suffer the same 75% collapse that the NASDAQ 100 Index suffered after that bubble popped in 2000?

The jury’s still out, but initial indications are not good for Bitcoin. In the first two weeks of September, the dollar price of Bitcoin crashed 35% from $4,950 to $$3,226. It has recovered somewhat since then, but it remains to be seen if this price action is a true “buy the dips” opportunity or a sucker’s rally. My estimate is that it’s the latter.

Another important aspect of Bitcoin valuation is that fact that Bitcoin has never experienced a full business cycle. As discussed above, Bitcoin was invented in 2009. That was also the year the current business cycle recovery began.

It’s true that this economic recovery has been one of the weakest on record with U.S. growth averaging just about 2% per year compared to 3% or higher in previous recoveries. But, it’s a recovery nonetheless and one of the longest ever. No one knows when the next recession will occur, but after a near-record 96-month expansion, no one should be surprised if a recession occurs soon.

Investor behavior in financial adversity can take many different forms. Sometimes bonds sell off, sometimes stocks, sometimes commodities. The one thing recessions and panics all have in common in that everyone wants liquidity.

If so, will all of that forced selling and demand for liquidity cause the price of Bitcoin to collapse if it hasn’t already collapsed due to the bubble dynamics described above?

We’ve seen how stocks, bonds, gold, real estate and other assets perform in recessions and panics in the past. But, we have no idea how Bitcoin will perform because it has never experienced an adverse economic climate.

My estimate is that Bitcoin will suffer in a liquidity crunch as investors sell all forms of assets, including Bitcoin, for more liquid forms of money that governments and creditors are prepared to accept. A 75% or greater collapse in the dollar price of Bitcoin, therefore, seems likely.

Bitcoin is money, but money is a confidence game. It’s good to bear that in mind.

The problem with confidence as the basis for determining the subjective value of money is that it is ephemeral. It can be here today and gone tomorrow based on crowd behavior that is easy to model in theory and impossible to predict in reality.