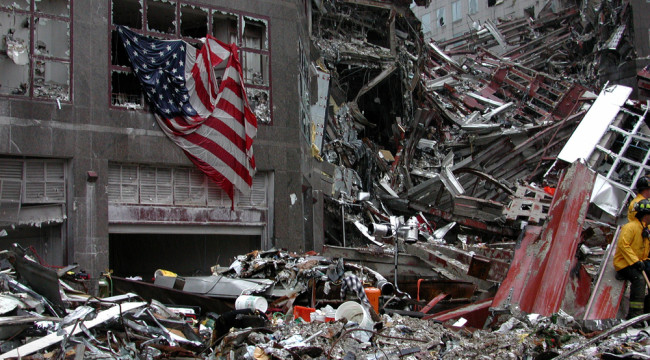 The Biggest U.S. Government Cover-Up Ever?

And former FBI agent Mark Rossini says his attempts to investigate were “thwarted” by the White House.

What I’m referring to is one of the most egregious government whitewashes in U.S. history.

And it’s only now being revealed some 13 years later…

In 2002, the U.S. government released a 9/11 Congressional investigation report.

They told us it would give the American people a full and honest accounting of the cause and perpetrators of the 9/11 attacks.

But when the 9/11 report was released more than 13 years ago, 28 pages of it were redacted.

It seemed we would never know what was in them… or no one cared.

As it turns out, the details of those pages were deliberately withheld from the American people.

The government told us it was for our own good. Our national security was at stake.

All Roads Lead to the Kingdom

A recent “60 Minutes” episode revealed what was in those 28 pages.

They contain evidence that the highest levels of the U.S. government downplayed Saudi Arabia’s participation in the 9/11 attacks.

They said the Bush White House and the FBI repeatedly stonewalled the investigation of the 9/11 attacks.

And former Chairman of the Senate Select Intelligence Committee Bob Graham has even gone on record saying:

“The Saudi government without question was supporting the hijackers who lived in San Diego… The agencies from CIA and FBI have suppressed that information, so American people don’t have the facts.”

That’s an astonishing statement from someone with a birds-eye view of the intelligence.

Welcome to the Machine

Many will find these revelations startling. But I’m not one of them.

It’s no secret that those serving at the highest levels of the U.S. government have always had close ties to the Saudi royal family.

Saudi Arabia is a major player in the global oil market.

And they were an even bigger player back in 2002 before U.S. fracking flooded the world with oil.

Did anyone really believe the Bush administration, with its close ties to Big Oil, would take a hard line against the Saudis?

In fact, following the 9/11 attacks, the U.S. government arranged charter flights for dozens of Saudis to whisk them out of the country.

Some of them were relatives of Osama bin Laden.

They received FBI escorts back home… instead of interrogations.

Many believed this was just another crazy conspiracy theory.

But now we know the truth.

The Deep State would never risk its extremely lucrative relationship with the Saudis.

They weren’t going to screw things up by digging too deep into the nitty-gritty details of how 3,000 Americans were murdered.

Proof That Presidents Are Just Marionettes

Before you think I’m picking on the Bush Administration, let me say this…

In 2008, then candidate Obama promised that he would declassify the 28 pages when President. Yet six years later the 28 pages remain secret.

Now Obama says that if Congress passes legislation to open the 28 pages to the public and allow 9/11 victims to sue Saudi Arabia, he will veto it.

He says that if we allow Americans to sue another government, then other citizens in other countries will sue the U.S. government.

That is really sick thinking.

This is not some frivolous lawsuit.

This is about a foreign country facilitating the murder of thousands of Americans on their soil.

That used to be known as war.

The truth is Obama, like all other Presidents, is just another marionette controlled by the Deep State.

I’m not offering my thoughts here to jump into a complex debate about politics, foreign policy or terrorism.

The point is to emphasize that the “reality” put forth by the elites is manipulated.

You need to know that almost all market or geopolitical information you receive is tainted. The system constructed is rigged in their favor. And the interests being served behind the scenes are far different than yours.

The Deep State will go to great lengths to keep its secrets and protect its interests. And it’s very good at what it does.

In the most high-profile attack on American soil in history… with thousands of Americans killed… the World Trade Center demolished… and the Pentagon in rubble… the Deep State managed to hide the true nature of the attack from the American people for more than 13 years.

The only reason it’s being talked about today is because a group of 9/11 victims’ families has been vigilant in seeking recourse from the Saudi government.

That has pushed the issue on to the front pages… and onto the radar of all of us that still care.

My analysis is something for you to keep in mind as you navigate your way through smart investing.

The elites control the flow of information… and that includes actions that can shape and move entire markets.

Remember what Reagan said about Gorbachev?

Well, the Deep State can’t be trusted, and there is very little we can verify.

The only rational way to deal with this irrational reality is to pay extra close attention to the trends that flow from these chaotic events… and ride those trends to your advantage.

That’s why I see trend following as the only investing sanity available in an insane world.

Please send your comments to coveluncensored@agorafinancial.com. I’d love to hear your thoughts. Don’t sugar coat it!

Today, Jody Chudley reveals the TRUE Mohammed Bin Salman, and explains how his actions could spike oil to $400/barrel…