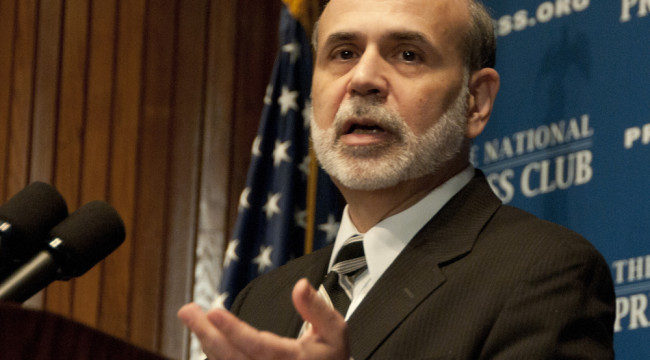 The worldwide race of central banks to the zero bound and negative interest rates (NIRP) and their $10 trillion bond-buying spree during the last seven years was the brainchild of Ben S Bernanke.

He’s the one who falsely insisted that Great Depression 2.0 was just around the corner in September 2008. Along with Goldman’s man at the U.S. Treasury, Hank Paulson, it was Bernanke who stampeded all of Washington into tossing out the window the whole rule book of sound money, fiscal rectitude and free market discipline.

In fact, there was no extraordinary crisis…

The Lehman failure essentially triggered a self-contained leverage and liquidity bust in the canyons of Wall Street. It would have burned out there had the Fed allowed money market interest rates to do their work. It would have forced the gambling houses into liquidation like Lehman Brothers, Goldman Sachs and Morgan Stanley. They had loaded their balance sheets with trillions of illiquid or long-duration assets and funded them with cheap overnight money.

There would have been no significant spillover or contagion effect. The notions that the financial system was imploding into a black hole and that ATMs would have gone dark and money market funds failed are complete urban legends. They were concocted by Wall Street to panic Washington into massive intervention to save their stocks and partnership shares.

The same is true of the claim that corporate payrolls would have been missed for want of revolving credit availability and that the entirety of AIG had to be bailed out to the tune of $185 billion in order to protect insurance and annuity holders.

In fact, the entire problem of the collateral call on AIG’s bogus credit default swap (CDS) insurance was contained at the holding company. The latter could have been liquidated with less than $60 billion of losses distributed among the world’s 20 largest banks. These were mostly state-backed European behemoths — like Deutsche Bank and BNP Paribas — that between them had balance sheet footings of $20 trillion. The loss would have amounted to a couple of quarters net income and a big dent in year-end bonuses for top executives. Nothing more.

The most important point, however, is that there was never any danger of a run on main street banks by retail customers.

To be sure, there would have been a temporary disruption in the real economy owing to the necessary curtailment of unsustainable activities related to the housing bubble and due to a downshift of household consumption that reflected unsustainable borrowing.

But as I demonstrated in detail in my 2013 book, the Great Deformation, the necessary liquidation of excessive inventories and labor that had built-up during the housing boom had exhausted itself by September 2009. That was long before there was even a remote hint that Bernanke’s wild money pumping had caused households and business to increase their borrowing levels.

Stated differently, the U.S. economy was already at peak debt, meaning that the credit channel of monetary policy transmission was broken and done. The modest recovery that did occur thereafter was due to the natural regeneration capabilities of capitalism and the restoration of economic and financial balance in the main street economy.

The recovery did not depend on Wall Street. Bernanke and his merry band of money printers had virtually nothing to do with the restart of jobs growth and GDP expansion after June 2009.

But far be it for the Fed and the gaggle of Washington politicians to realize, let alone admit, that they actually caused the housing and credit bubble, but had nothing to do with the modest recovery that ensued after it burst.

Bernanke has actually made a career out of claiming just the opposite. He believes that he alone had the insight and acumen to diagnose the purported onrushing depression and the “courage” to, well, run the printing presses white hot in order to stop it in its tracks.

The fact is, Bernanke has been a charlatan and intellectual lightweight all along — going back to his alleged scholarship on the Great Depression. He simply Xeroxed Milton Friedman’s mistaken theory that the Fed failed to go on a bond-buying spree during 1930–1932 and that this supposed error turned the post-1929 contraction into a deep, sustained depression.

No it didn’t. The 1930s depression was the consequence of 15 years of wild credit expansion—first during the “Great War” to fund the massive expansion of U.S. food and arms production and then during the Roaring Twenties to finance the greatest capital spending binge in history prior to that time.

The depression was not a consequence of too little money printing during 1930-1932, but too much speculative borrowing and investment by business and households after the Fed discovered its capacity to print money during the war and the decade thereafter.

In any event, behold Bernanke’s latest contribution to the history of monetary crankery. The very idea that the Fed would set up a “loan account” that our already incurably profligate Washington politicians could tap at will is so nutty as to be virtually impossible to paraphrase. So let the man’s words do the dirty work:

Ask Congress to create, by statute, a special Treasury account at the Fed, and to give the Fed (specifically, the Federal Open Market Committee) the sole authority to “fill” the account, perhaps up to some prespecified limit. At almost all times, the account would be empty; the Fed would use its authority to add funds to the account only when the FOMC assessed that a Money-Financed Fiscal Program (MFFP) of specified size was needed to achieve the Fed’s employment and inflation goals.

Should the Fed act, under this proposal, the next step would be for the Congress and the Administration — through the usual, but possibly expedited, legislative process — to determine how to spend the funds (for example, on a tax rebate or on public works)… Importantly, the Congress and Administration would have the option to leave the funds unspent. If the funds were not used within a specified time, the Fed would be empowered to withdraw them.

Let’s see. Does he think the boys and girls of Capitol Hill would ever not spend 100% of their allowance?

More importantly, does the man really think that you can get something for nothing? That real wealth can be created not through the sweat of labor, or entrepreneurial invention and managerial innovation or the sacrifice of current consumption in favor of savings and future returns, but simply through hitting the “send” button on the Fed’s electronic printing presses?

The rest of Bernanke’s post is too imbecilic to even quote or reprint, but the gist of it is that the U.S. economy is wanting for some nonexistent ether called “aggregate demand”. And that this ether is something the Fed can easily create by handing an open-ended spending account to politicians, and one that would never have to be repaid or even serviced with interest!

It puts you in mind of the medieval theologians who endlessly debated as to the number of angels which could fit on the head of a pin. The trouble is, there is no such thing as angels.

Nor is there any such thing as economic growth or wealth that can be conjured by politicians spending Bernanke’s utterly counterfeit money.