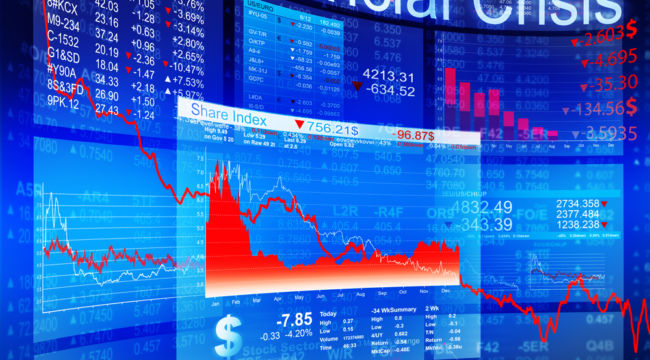 Beginnings of a Financial Panic?

Right now, recession risk is low. But signals from the credit markets suggest we could soon have a possible panic, as part of the market nearly seized this week.

The “repo” rate is the rate that banks pay to borrow overnight in exchange for safe collateral like U.S. Treasurys. And the overnight interest rate spiked as high as 10% this week, which lifted the fed funds rate above the Fed’s target rate, which was 2.25% before Wednesday’s rate cut. There was a liquidity shortage.

To restore calm and bring the fed funds rate back within its target range, the Fed rushed in with about $125 of liquidity Tuesday and Wednesday, its first repo operation since the financial crisis.

The market seems to have stabilized for now. But it could be an indication that the Fed is losing control of interest rates.

While different in the details, the incident reminded me of a private dinner I had a few years ago…

It took place where I was living at the time, in Darien, Connecticut, with one of the best sources on the inner workings of the U.S. Treasury bond market.

He’s an insider’s insider who’d spoken regularly with major bond buyers in China, Japan and the big U.S. funds like PIMCO and BlackRock. For purposes of this article, let’s just call him “Mr. Bond.”

Over white wine and oysters, I told Mr. Bond about my view of systemic risk in global capital markets. In effect, I was using Bond as a reality check on my own analysis. This is an important part of the analytic technique I use in economic forecasting.

First, develop a thesis with the best information available. Then test the thesis against new information every chance you get. You’ll soon know if you’re on the right track or need to revise your thinking.

My conversation with Mr. Bond was the perfect chance to update my thesis.

Literally trillions of dollars of cash were sloshing around the world banking system in the form of excess reserves on deposit at central banks — the result of massive money printing since 2008.

Here’s a chart showing the bond market flash crash on a minute-by-minute basis. The time of day is along the horizontal axis and the yield-to-maturity is on the vertical axis. 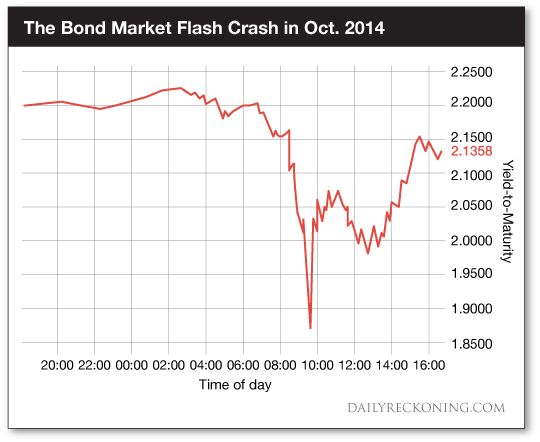 This was the flip side of money printing by the Fed. When the Fed prints money, they do it by purchasing bonds in the market and crediting the seller with money that comes out of thin air.

As Mr. Bond and I finished our meal and polished off the last of wine, we agreed on a few key points. Markets are subject to instant bouts of illiquidity despite the outward appearance of being liquid. There would be more flash crashes, probably worse than the ones in 2010 and 2014.

This panic might not happen tomorrow, but then again it could. The solution for investors is to have some assets outside the traditional markets and outside the banking system.