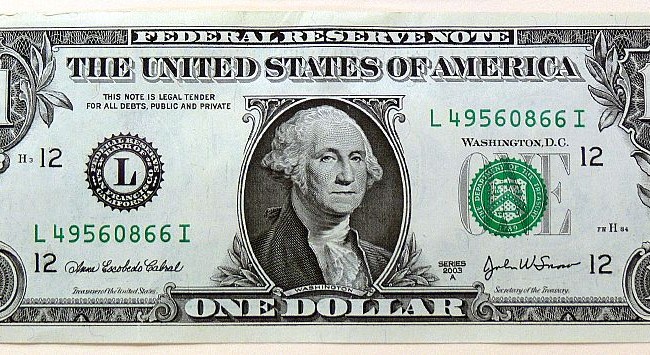 Be Prepared for a Cheaper Dollar

When will the strong dollar weaken? Ultimately, the answer is whenever the Treasury wants.

When the Treasury is not overly concerned with the dollar, market forces can prevail to raise or lower the exchange rate compared with euros, Swiss francs, yen or any other currency.

Sometimes, other central banks intervene to raise or lower their currencies relative to the dollar and the U.S. does not seem to care. China is notorious for this. Japan and Switzerland are other practiced currency manipulators.

The last fully coordinated currency market intervention was conducted by the G-7 in March 2011 at the time of the Fukushima, Japan, earthquake and tsunami that caused the collapse of a nuclear power plant and ultimately a crash of the Tokyo stock exchange.

The Japanese economy was weakened by the natural disaster. A weaker yen would have helped the economy with cheaper exports and more inflation. But insurance companies had to sell dollar-denominated assets and buy yen in order to pay yen-denominated claims for the disaster losses. The result was a stronger yen.

The G-7 intervention, organized by then French Finance Minister Christine Lagarde, successfully sold yen and bought euros, dollars and sterling to weaken the yen despite insurance companies buying it. Lagarde’s success in this intervention was instrumental in her elevation to head of the IMF shortly thereafter.

In short, except in extraordinary circumstances, the U.S. Treasury does not directly intervene in currency markets to target U.S. dollar exchange rates. If such targeting is needed, the Treasury will work with the Fed to raise interest rates or take a pause in rate hikes to affect the dollar’s value.

All of this may be about to change.

Both President Trump and Treasury Secretary Mnuchin have publicly expressed dismay at the dollar’s persistent strength in the second half of 2018. A strong dollar has adverse effects relative to Trump’s economic plans.

It makes imports less expensive, which has a deflationary impact on the U.S. domestic economy. This is at a time when both the Fed and the White House would like to see more inflation.

A strong dollar also hurts U.S. exports from major companies such as Boeing and GE. That hurts U.S. competitiveness and U.S. jobs. Finally, a strong dollar hurts corporate profits of U.S. global companies because their overseas profits are translated back into fewer U.S. dollars. This is a head wind to U.S. stock market performance. 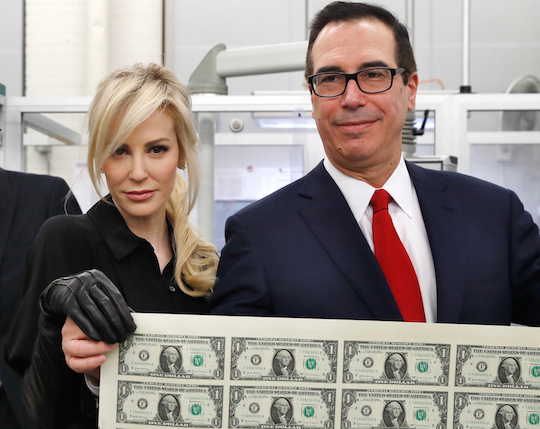 U.S. Secretary of the Treasury Steven Mnuchin and his wife hold a sheet of freshly printed dollar bills during a visit to the U.S. Bureau of Printing and Engraving. The dollar has been strong during most of the Trump administration since early 2017. However, the strong dollar causes deflation and reduced exports. Trump and Mnuchin will soon weaken the dollar to boost growth.

While the White House and Fed may be united in their desire to see a weaker dollar and more inflation, the Fed is doing nothing to achieve that. The Fed has been on a path of raising interest rates for almost three years, beginning with the “liftoff” rate hike in December 2015.

Since October 2017, the Fed has also been tightening money supply by not reinvesting in Treasury securities when existing securities in their portfolio mature. This “quantitative tightening,” or QT, is the opposite of quantitative easing, QE.

The combination of rate hikes and QT has caused a significant increase in U.S. interest rates in all maturities and, in turn, a stronger dollar as capital flows to the U.S. in search of higher yields. The result is a persistent strong dollar.

This means that if the White House and Treasury want a weaker dollar, they may have to achieve it on their own with no help from the Fed. The Treasury is well-equipped to do this kind of intervention by using their Exchange Stabilization Fund, or ESF.

The ESF was created under the Gold Reserve Act of 1934, which provided legal ratification for FDR’s confiscation of private gold from U.S. citizens in 1933. FDR paid $20.67 in paper money for the gold in 1933, knowing he intended to raise the price of gold.

His plan was to capture the “gold profits” for the government instead of allowing citizens to realize the profits. Those profits were the original source of funding for the ESF.

Importantly, the ESF exists completely outside of congressional control or oversight. It is tantamount to a Treasury slush fund that the Treasury can use as it sees fit to intervene in foreign exchange markets. No legislation or congressional appropriation is required.

Former Treasury Secretary Bob Rubin used the ESF to bail out Mexico in 1994 after Congress had refused to provide bailout money through other channels.

Today, the ESF has net assets of about $40 billion. The gross assets include about $50 billion in SDRs, but the Treasury can issue SDR certificates to the Fed in exchange for dollars if needed to conduct currency market operations. You can find the ESF financial statements here.

The biggest offender in the currency wars today is China, which has devalued the yuan 10% in the past six months to offset the impact of higher tariffs imposed by Trump. China’s cheap-yuan policy is undermining Trump’s trade war policies.

After biding their time, Trump and Mnuchin are ready to lower the boom on China with a cheap-dollar policy after the U.S. midterm elections. Of course, China will not be alone in feeling the impact of the new cheap dollar. Europe and the euro are also in the line of fire.

With this background in mind, what is the outlook for U.S. dollar exchange rates?

The single most important factor in the analysis is that two currencies cannot devalue against each other at the same time. It’s a mathematical impossibility. If one currency is going down against another, then the other must be going up. There’s no other way.

From January 2010 (when Obama launched the currency war) to August 2011 (when the dollar hit an all-time low), the currency wars benefited the U.S. at the expense of Europe, emerging markets and China. This was considered necessary by the participants at the G-20 leaders summit in Pittsburgh in September 2009.

The U.S. was and is the world’s largest economy. If the U.S. could not escape the impact of the 2008 financial panic, no one else would, either. In effect, the world would suffer stronger currencies while the U.S. devalued to jump-start the global recovery.

After August 2011, the dollar was allowed to revalue upward while the rest of the world, especially Europe and China, was allowed to devalue so they could claim some benefit from a weaker currency. This worked in the short run, but the problem was that the U.S. never returned to sustained growth at the prior trend of 3.25% growth per year.

The U.S. endured a long depression from 2007 until today with annual growth of about 2.3%. Europe and China got a boost, but the U.S. never pulled away from the pack.

Since then, it has been a matter of taking turns. The euro is allowed to depreciate to help growth and the banking system as the dollar gets stronger based on a slightly stronger U.S. economy. But no major economy has solved the problem of achieving self-sustaining trend growth.

China has been free-riding the entire time. There have been periods of a soft peg of the yuan to the dollar, but there are intermittent periods of a weaker yuan. China executed shock devaluations in August 2015 and December 2015.

Both times, U.S. stocks fell 11% in a matter of weeks. China has just executed a 10% slow-motion devaluation over the past six months. U.S. stocks have started to sink again.

Now Trump and Mnuchin are saying, “Enough!” The Europeans will have to take their turn with a stronger currency and China will be penalized for their currency manipulation. A weaker dollar is coming.

Whether this will be achieved with cooperation by the Fed or direct intervention by the Treasury remains to be seen, but a weaker dollar is the only way out of the U.S. growth conundrum and debt debacle.

The chart below shows that the euro has settled into a trading range since April after coming down from the $1.25 range in February. 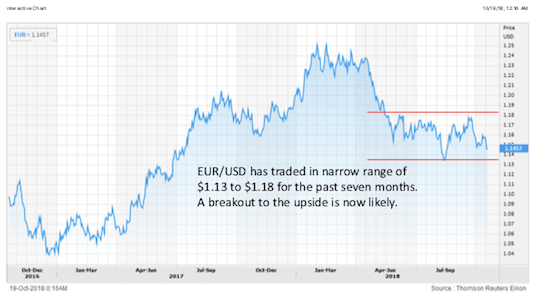 The euro will break out of that trading range toward the upside ($1.20–1.30) over the next few months. This will be the result of a possible Fed pause in rate hikes as the U.S. economy weakens, continued determination by the ECB to tighten policy and possible intervention by the U.S. Treasury.

Meanwhile, a weaker dollar will give the U.S. another growth spurt after the 2018 tax cuts to help propel Trump’s reelection prospects for 2020.