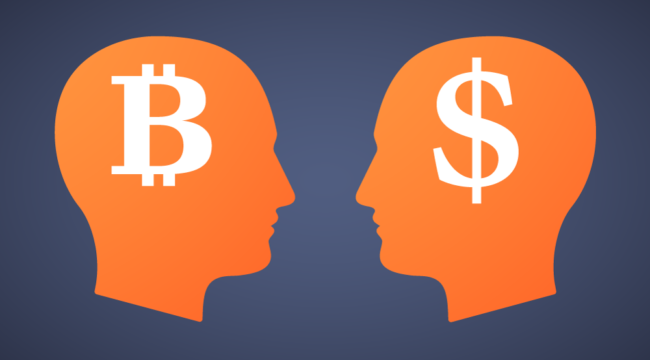 Battle for the Future of Money

We prefer known to unknown… old and reliable to new and improved… today’s certainty to tomorrow’s promise, however gaudy.

Perhaps that explains our irrational attachment to gold, the eternal money.

It also likely explains our delayed recognition of cryptocurrencies like bitcoin.

But the cryptocurrency market cracked the $150 billion mark last week. Its total market cap has exploded nearly 800% to date.

We can no longer avert our gaze…

Our agents now inform us that three Republican members of Congress seek legislation to elevate cryptocurrency in law.

The proposed legislation would ultimately allow cryptocurrencies meeting certain criteria to compete with the dollar, free from government monkeying.

These currencies would have to comply with anti-money laundering laws, for example.

In this vision, select digital currencies would take their place alongside the dollar — not beneath it. But how?

But the three Republican drafters have apparently requested anonymity due to the controversial nature of the proposal.

As one might expect, officials won’t surrender their dollar monopoly willingly.

And they’ve got their backs up high and stiff.

When has a monopolist welcomed competition, after all?

Llew Claasen is the executive director of the Washington-based Bitcoin Foundation. The organization seeks to promote the use of bitcoin around the world.

And Claasen says cryptocurrencies like bitcoin land a blow for monetary freedom:

Right now, we have no control over what central banks do with the money supply… so it gives us another option — aside from gold — that we can easily move.

Importantly, this fellow is no revolutionary out to dethrone King Dollar.

He merely seeks a free field in currencies… as it exists in soft drinks or autos or funeral homes or most anything else.

That competition would keep central banks on the jump, as competition forces established business to meet the prices and the quality of the striving upstart. Claasen:

I don’t think it’ll ever replace the system, but I do think it will give us the option of holding our monetary authorities to a higher standard than just being able to do what they want with our money.

We must admit… these cryptocurrencies begin to seduce us.

We take a strong line against monopoly here at The Daily Reckoning, in all its forms.

And what could be better than competition in money?

If the Federal Reserve mismanages the dollars in your wallet, why not shop your business before eager competitors?

It’s the bedrock of capitalism.

May the best man win — cryptocurrencies, gold, even the besieged dollar — as long as it’s the verdict of free and open markets.

The Federal Reserve has squinted haltingly in the direction of cryptocurrencies.

He says central banks are lumbering bureaucratic behemoths, for example:

Decision-making in central banks is like wading through treacle — decisions take months because of numerous layers of hierarchy.

That bureaucratic system wars against the decentralized and spontaneous nature of cryptocurrencies.

Central banks are also staffed by academics and economists with their hidebound formulae, not innovative technologists who bring to the business an entirely different set of rules.

For these and other reasons, central banks can never come within miles of cryptocurrencies — unless they drop the word “central” from their title and adopt a new business model.

Do wake us on that distant morrow when central banks willingly surrender control of the monetary system.

Which will win the future?

Neither… both… some form of hybrid system?

We know who we’d like to put our money on. We’re just not sure if the bet will be settled in dollars, gold… or cryptocurrency…