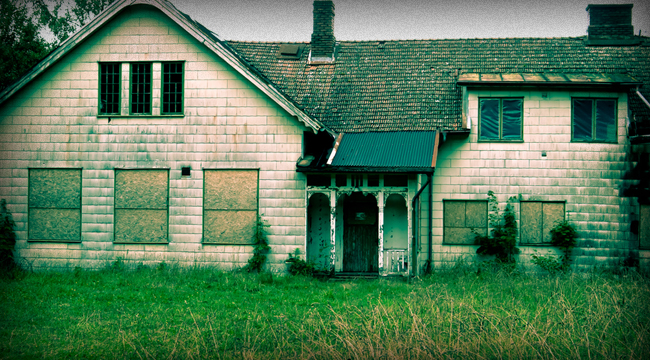 Walking away is not just for homeowners anymore. Now banks have joined in and are walking away, leaving thousands of homes vacant because they don’t want to be responsible for maintaining them.

While housing bulls urge investors to buy up houses, banks that could control property ownership merely by foreclosing and paying the back taxes, homeowner’s dues, and other expenses are saying no thanks. The math just doesn’t work.

The bulls may want to rethink their strategy. “Bank ‘walkaways’ used to be extremely rare, but they have ballooned in the past year or so, resulting in a large number of homes stuck in foreclosure, sometimes for years,” reports Kate Berry for American Banker.

In my book Walk Away: The Rise and Fall of the Homeownership Myth, released to Laissez Faire Club members last year, I explore the ethics of strategically defaulting, or walking away. You may remember the ethical bashing that people who handed their lenders the keys took when it made financial sense to do just that. There was a great hue and cry that individuals must honor their obligations, set a good example for their kids, and protect the values of neighborhoods.

Well, good examples and neighborhoods be damned. “Banks speak more openly about how if it’s not in their economic interest to foreclose, they’re not going to foreclose. It may cost more to cure the back taxes and bring the property up to code than they could ever get from selling the property itself,” says Thomas Fitzpatrick, an economist in the community development department at the Federal Reserve Bank of Cleveland.

As the housing market was melting down, bankers and their mouthpieces went on and on jawboning the public that they should pay their mortgages at all costs. As I explain in Walk Away, bankers are hypocrites, and their current actions prove it.

Consumer advocates claim the banks and mortgage servicers are “blatantly ignoring Federal Reserve guidance that requires borrowers be notified if a foreclosure is initiated and then abandoned. They also are raising fair-lending concerns because abandoned foreclosures are more prevalent in low-income and minority neighborhoods.”

What happens is that lenders send a foreclosure notice and the owners get scared and move out. The date for the foreclosure sale approaches and the mortgage servicer sends someone to take a look at the place. If the house is in shambles and the back taxes and/or HOA fees are significant, it may not make economic sense for the lender to take title and absorb those costs, repairs and marketing if they can’t turn around and sell the house for more than they would put out. Your first loss is your best loss, as bankers like to say.

According to RealtyTrac, there are 300,000 vacant homes currently in the foreclosure pipeline. Daren Blomquist, vice president at RealtyTrac, tells American Banker, “We call them zombie foreclosures.” That seems appropriate. The biggest mortgage owners and servicers are zombies — Fannie Mae, Freddie Mac, FHA, Bank of America, and JPMorgan Chase.

But anyone who has left without a word after just receiving a foreclosure notice is not likely to be easily found.

The problem, of course, is that the municipalities and homeowners associations will be filing judgments against homeowners who thought they had lost their houses and are trying to move on with their lives. As Ms. Berry writes, “If a servicer has not taken title to the property, cities instead end up tracking down the former homeowner to pay for liens, upkeep, and taxes. These former homeowners could also be on the hook for overdue homeowner association fees, past-due insurance, and the mortgage debt.”

Theoretically, if banks don’t think it’s worth their while to foreclose, they would extinguish the debt and be done with it, leaving the house and the attached liens and expenses for the owner to deal with. However, in the real world, it doesn’t happen that way. The banks want their cake and to eat it too.

“No bank just forgives the debt,” Peter Skillern, executive director of the Community Reinvestment Association of North Carolina, tells American Banker. “Part of why you see an increase in abandoned foreclosures is because it’s an accretive problem. Our research shows that homes that banks walked away from in 2008 are still sitting there.”

There are many thousands of borrowers who are begging their lenders to take back their homes. The banks won’t take the houses back. Instead, they delay filing using a number of tactics. According to James Kowalski, executive director of Jacksonville Area Legal Aid, lenders are “doing it repeatedly in Florida. If you want any better proof that the banks are slowing down the process state by state, based on their own internal analysis, this is it.” He says the banks control the foreclosure process, not the homeowners, and not the courts.

This way, some banks can manage the amount of “other real estate owned,” or OREO, on their balance sheets by not taking title. Also, if banks hustle to get these homes on the market, they will nip the housing recovery in the bud.

“I have long been convinced that the current run-up in home prices is a false high,” senior staff attorney at the Empire Justice Center Ruhi Maker, a New York nonprofit, tells American Banker. “Once all these foreclosures are through the system, we could see another decline in prices.”

False high, indeed. Bankers cannot control the market forever. There is lots of vacant inventory just waiting to hit the market. When it does that will be the time to buy. Not now.

5 Financial Rules of Thumb You Need to Break

Some rules are outdated, and some simply don’t apply to everyone’s individual financial circumstances. So why bother follow a rule that makes no sense? Here’s my list of 5 financial rules of thumb you need to consider breaking for your own good: