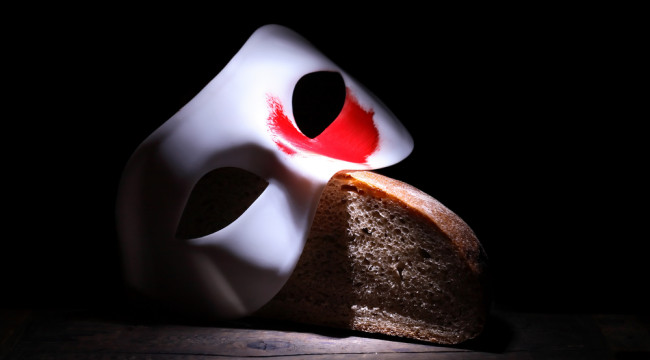 MELBOURNE — If you didn’t already know, today is a public holiday in Victoria.

The reason? Ummm…the AFL Grand Final is tomorrow. Seriously. Everyone gets a day off to prepare for a sporting event.

Well, that’s not how politicians see it. While new PM Malcolm Turnbull is attempting to perform the fine balancing act between maintaining confidence and telling it how it really is (pretty bad) the Vic’s are whooping it up!

I suppose when you enjoy a massive house price boom on nothing more than low interest rate fumes and a population Ponzi scheme you can afford to throw the odd party.

But let’s be honest. It reeks of bread and circuses. The Romans gave birth to the term over 2000 years ago. According to Wikipedia:

‘Bread and circuses’ (or bread and games; from Latin: panem et circenses) is metonymic for a superficial means of appeasement. In the case of politics, the phrase is used to describe the generation of public approval, not through exemplary or excellent public service or public policy, but through diversion; distraction; or the mere satisfaction of the immediate, shallow requirements of a populace, as an offered ‘palliative.’ Its originator, Juvenal, used the phrase to decry the selfishness of common people and their neglect of wider concerns. The phrase also implies the erosion or ignorance of civic duty amongst the concerns of the commoner.

It was the beginning of the end for the Romans. Within a few hundred years of Juvenal coining this phrase, Rome was under barbarian invasion from the north. Constantine had to move the seat of the empire from Rome to Byzantium, which become known as Constantinople.

There it stood as the capital of the Roman Empire for over 1,000 years. In 1453, the Turks finally brought down its hitherto impregnable walls. Constantinople then became Istanbul.

There’s an interesting historical irony in this story, which continues to this day. I’ll come back to it in a moment.

For now, let’s continue with Australia’s version of bread and circuses.

The Wikipedia quote above sounds pretty accurate, no? I mean, some of our nation’s great companies are imploding, federal politics has been a mess for years, household debt levels are at record highs, and the common people don’t seem to give a hoot.

Whether it’s selfishness or ignorance is a moot point. Our idea of civic duty would make the early Romans blush with embarrassment.

But if you own shares in Santos [ASX:STO] or Origin Energy [ORG] you’re probably no longer ignorant of Australia’s dire situation.

First, there was the massive price boom and overinvestment in iron ore. The subsequent price bust is now slowly claiming its victims. Both Rio Tinto [ASX:RIO] and BHP Billiton [ASX:BHP] hit multi-year lows this week. They’ve enjoyed a mild reprieve over the past few days, but it still looks ugly.

Now you’re seeing another overinvestment bust take place in the LNG space. Both STO and ORG borrowed heavily to build LNG plants. They based their decision on the expectation of much higher oil prices.

The oil price crash left them with loads of debt and marginally profitable projects…projects that they can’t just shut down and wait for the oil price to recover. Instead, they will run them at a loss and pray the oil price gets back to US$80/bbl.

The chart below shows the performance of STO (in blue) and ORG (yellow line) over the past 12 months. 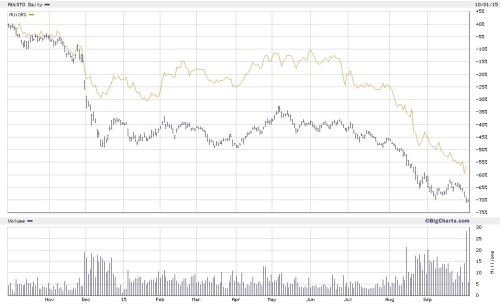 It will be interesting to see whether CEO Grant King survives this debacle. Instead of being proactive and moving ahead of the market, he reacted to this week’s panic over Glencore’s debt pile and raised capital at the worst possible time.

If someone came along and offered, say, $7 a share to buy Origin, King would wave them away and say the offer significantly undervalued the company. But in a moment of desperation he’s more than happy to sell off a chunk of the company at $4 per share.

CEOs get very well paid for being in the right place at the right time. It’s only when times are tough that you find out if they are as good as their pay packs suggest. Most fail the test.

The iron ore and LNG busts are a metaphor for Australia’s economic decline. Now we just need the most epic misallocation of capital of all, in residential housing, to reveal itself and we’ll have an economic trifecta of biblical proportions. There won’t be enough circuses to cover that one up.

Speaking of biblical, and getting back to our earlier thread, the Byzantines (as the inhabitants of Constantinople were known) believed that God had an eye on them. It was the greatest city in the world and was impregnable from attack…at least until early cannon fire came about.

But it was constantly under threat. Oddly enough, up until the Turks became an irresistible force from the east, the biggest threat came from the Christian West. And this is where the story is interesting from a modern perspective.

In 1054 The Great Schism occurred. Rome and Constantinople had some major theological differences and couldn’t resolve them. This began a long standing enmity between the ‘Latins’ from the West and the Greeks from Constantinople.

About 40 years after this, the Byzantine Emperor at the time asked the Pope for military assistance against the threat from the Seljuk Turks. The Pope assented but this ‘help’ turned into the first crusade.

The crusades were a debacle for the Byzantines. The crusaders, mainly from Germany and France, had to go through Byzantium on their way to Jerusalem. This made their enmities worse.

By the time the fourth Crusade came about, the Latins gave up the pretence of acting in the name of Christendom and they sacked Constantinople instead. They ruled for about 50 years, in which time they stripped the city of off its wealth and desecrated its religious sites.

One of the Latin Emperors, Baldwin II, apparently offered the Crown of Thorns worn by Jesus to the King of France, in return for military help.

Byzantium never recovered and although the Greeks eventually took the city back and sent the Latins packing, it was just a matter of time before the encroaching Turks ended the 1,000 year old empire.

With this background, it is perhaps not surprising to see the Greeks and Latins still going at it, if only in slightly more dignified terms.